Flick through any American hunting magazine and you will immediately notice just how big of a name Vortex Optics have made for themselves especially with their spotting scopes, and for good reason too, running at a fraction of the price of the big European brands and optically not far off the quality of those same brands.

In terms of quality for people on a tighter budget Vortex is really a no brainer. Vortex have a massively wide range of different options for their spotting scopes which will cater to all hunting applications but for the review we had a 16-48x65mm angled body RAZOR HD which fits right in the middle of the Vortex range in terms of zoom and objective lens diameter which run into an 85mm objective and as high as 60x zoom.

Also included for the review was a Phone scope, iPhone 6s phone case that the iPhone clips into much in the same way as a normal protective phone case, and this case directly adapts onto the Vortex Razor to make taking photos through the spotting scope very simple and easy.

Over a two month period I hunted countless days with the Vortex spotting scope and phone scope adaptor and was thoroughly impressed with not only the build quality but the clarity of the Vortex scope and the photographic opportunity it provided that a digital camera would not be capable of, photos were taken at distances over 1500 metres and photos of a big mature stag taken at over 900 metres that otherwise I would not have been able to get.

The HD 16-48x65 Spotting Scope review was conducted right over the coldest part of winter and a lot of the better glassing country was inaccessible due to winter snow falls so most of our hunting was conducted surrounding fringe country where there would be an opportunity to get some long distance photographs and to really put the scope to the test.

At all ranges the scope performed well and I was consistently picking deer up in the scrub and also when approaching their feed areas at distances over 1km with good clarity. 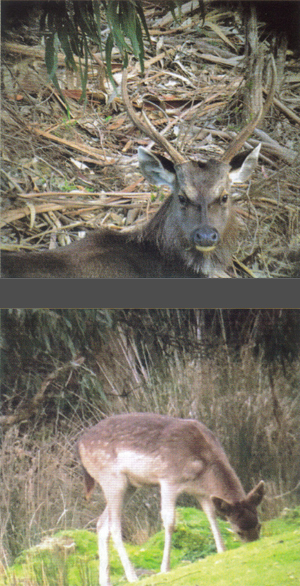 The twin focus system was very fast and easy to use and made getting the Vortex HD 16-48x65 scope very quick and even if the focus was a little off it made little difference not like a lot of other single focus scopes that when off even a fraction are rendered useless, it doesn't sound like much but when limited time is offered by a deer to determine what it is this feature is invaluable.

I found it easier whilst glassing for long distance to use my phone to find the deer through the phone scope adaptor instead of straining my eyes for long periods of time and numerous times found deer just simply watching my iPhone screen.

Using the phone scope adaptor is as simple as clipping the cover over your phone and then twisting the scope adaptor onto the back of the phone cover and then pushing it over the eyepiece of the spotting scope.

Then it is a matter of finding your target in the scope and firstly focusing the scope on that field and then tapping the iPhone screen to focus on the target and I found to give the phone a 3 second timer to allow it to settle before the shutter is exposed that way it snuggles down and is perfectly still.

I achieved some good clear sharp photographs using this method ranging from 180 metres out over 1km with the Vortex spotting scope.

The VORTEX RAZOR HD 16-48x65 Spotting Scope is a very well put together scope and as with all Vortex products is covered by a no questions asked lifetime warranty, no receipt required no paperwork to fill out, transferable so even If purchased secondhand it is still fully covered for replacement or repair.

The VORTEX RAZOR HD came provided with a protective case that once fitted can be attached and removed to a tripod without removing the case which is a great way of keeping the scope in good condition and dry in the rain, unfortunately the bag that was included for review had a faulty zipper and broke as soon as I attempted fitting it to the scope so it was just left it in the box, there is also a neoprene tight cover available as an extra.

Having previously used other European spotting scopes I can honestly say the glass is pretty close to those more expensive scopes but the difference although minimal is noticeable once the sun drops down and the light is minimal, although the build quality is just as good if not better.

For a spotting scope running at less than half the cost of some models in the Leica, Zeiss and Swarovski range it is a good alternative for the budget minded hunter that will service you with a lifetime of use and I was impressed with the quality.