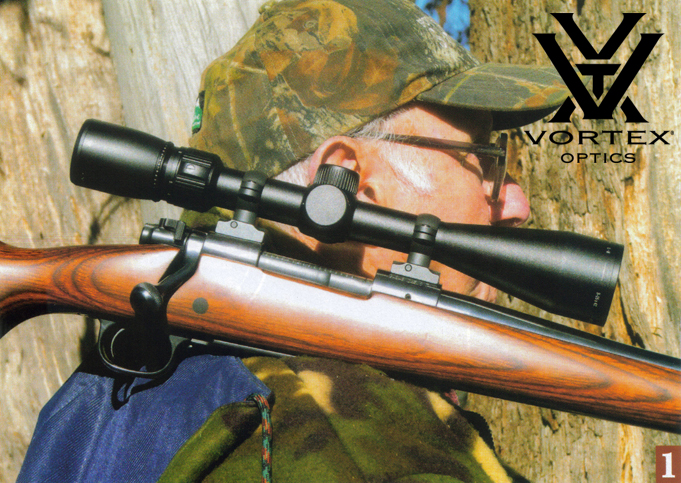 These Japanese riflescopes belong in the sensible category of high-range variables. They don't have large diameter tubes, are not overweight and their construction is pretty straight forward.

NEW For 2016 Razor HD LH (Light Hunter) riflescopes feature top-tier glass and clean lines in a sleek lightweight package which won't add too much weight and bulk to a light sporter. Unlike some of the current crop of long-range riflescopes which feature 30 and 35mm main tubes, the Razor HD LH is built on a one-piece, one-inch tube machined from aircraft-grade aluminium, which features a dull anodised finish hardened to resist scuffs and scratches.

The rear mounting section of the main tube is 57mm, and the forward section is 56mm, allowing plenty of latitude to slide the scope forth and back in the rings to gain proper eye relief. Ring spacing is important. Wc want the rings to give the scope as much support as possible without fouling the turrets or objective bell. One of my pet hates is the short-coupled variable scope which makes using extension rings necessary. I shy off them.

It's not that they are no less solid than standard rings, but they do tend to spoil the looks of a fine sporter.

This Vortex Razor HD LH is a neat looking scope with slim, trim lines, since Vortex Optics chose a 42mm objective lens diameter. Sure, a larger objective lens, say 50mm, would offer a slight increase in light transmission and resolution, but it would also require high rings which makes the shooter raise his face off the to see through the scope.

All things considered I think a 42inm objective is a more versatile choice.

Big objective lens are in style now because thev transmit more light and provide the scope with a larger exit pupil. The exit pupil is simply the ratio of objective lens diameter in millimetres to the scope's magnification.

Hence the exit pupil of the 3-15x42mm scope under review wouId shrink from 14mm at 3x to 2.8mm at 15x. Your eyes (actually young and perfect eyes) have pupils that vary in size between about 2.5mm in bright sunlight to 7.1mm in the dark.

During the prime hunting times at dawn and dusk, these pupils adjust 5mm or so.

Regardless of how big the front lens of a scope, eyes dilated to 5mm can only take advantage of an exit pupil that wide.

Therefore if you set this 3-15x variable at 8x your exit pupil with a 42mm objective will be 5.25 - enough to brighten the target image in dim light.

As evidenced by the name, the Vortex Razor's indexed-matched lenses are made from high-density (HD), extra-low dispersion glass, with an APO apochromatic lens system, XR Plus and premium fully multi-coated lenses.

High density extra-low-dispersion glass normally sees use in expensive telescopes. It is usually added to a doublet to form a triplet and give additional colour correction in the secondary spectrum. ED glass provides true colour images, sharp from edge to edge, exLra brightness and colour fidelity so that any light lost to the smaller objective is counteroalanced. As well it compensates for overlap in the angles of light rays brought together by the second element in an achromatic lens.

One-inch alloy tubes and quarter-inch click adjustments are what the majority of Aussie shooters expect in a hunting scope, but the pair of Vortex Razors actually have 1/4 -minute clicks which coincide with the MOA subtensions on the glass-etched reticles. Vortex scopes are built for the American market and the reticle is in the second focal plane so as you change magnification, it stays the same apparent size.

Each scope is Argon gas purged and O-ring sealed for fogproof and waterproof performance. Another more recent Vortex innovation is Annortek, a coating applied to exterior lenses to provide a scratch, oil and debris resistant coating. It does not block light and according to the people at Vortex may even crank up the brightness slightly. Each scope comes with a sunshade for use when the sun gets low and glare shine son the objective lens.

The Precision Glide Erector System is machined from brass alloy and a polished chrome-vanadium erector spring withstands pressure and has high fatigue resistance.

Parallax is the apparent movement of the target in the scope field as you move your eye up and down or from side to side. The images formed by targets at various distances fall at different points between the erector and ocular lenses.

Because the scope's reticle doesn't move along the tube's axis to compensate, it meets a focused image only when the target is a certain distance from the rifle. Most hunting scopes are set to be parallax free at 100 or 150 yards, but the Vortex has a third turret which allows you to programme the scope for zero parallax at the range you want to shoot. The turret adjusts from 20 yards to infinity.

Eye relief on maximum power is a long 3.8 inches. The eye relief for variable scopes typically shrinks from low to high power, but in the Vortex remains constant. Big-game rifles should have non-critical eye-relief because sometimes you must aim quickly from some hastily assumed position that puts your eye closer or farther from the scope than is ideal. The Vortex has non-critical eye relief which allows ample back-and-forth leeway before the field blacks out.

The adjustment turrets are capped and dials have 1/4 minute and one-minute inch graduations. After sighting in, a coin can be inserted in the slot on top of the knob to loosen the dial and allow you to realign the dial to zero. Setting the return to zero feature is essential for applying ranging data.

The scopes sent for evaluation had two different reticles - G4-BDC MOA and HSR-4 MOA. The listed distances on both reticles will only be valid with the scope set at the highest magnification. To utilise the scope to its fullest, you'll need to know the various subtensions of the bars on the reticle, but also the ranging formulas which you'll find by choosing one of the listed Firearm/Range classes. This is done by referring to the Vortex Long Range Ballistic Calculator (LRBC) which allows you to compare your bullet drop numbers to the ones listed for each class. Find it on your computer at www. vortexoptics.com.

After finding the correct class for your rifle, sight in the main centre-dot to the recommended zero range. 100 yards is the most common zero distance, but a 200 yard zero may be preferred for long range applications. Once the rifle has been sighted in the lower bars can be used as aiming points at the corresponding distances listed. For most popular calibres, the hash marks will provide accuracy within 0-4 inches of your aiming point depending on the range.

Instructions furnished with the scope list six different classes of rifles and detail drop figures and wind deflection for the various bars.

If you want to obtain the very best accuracy from the G4-BDC reticle, you can custom match yardages to the drop hash marks based on the exact ballistics of the load you are shooting, by referring to the ballistic software Vortex LRBC.

Much the same applies to the HSR-4 reticle which is a bit more sophisticated than the G4-BDC and has a fine centre crosswire coupled with MOA-based subtensions with 2 MOA spacing. It can not only be used to determine ranges, but also holdovers, windage corrections and moving target leads.

The instruction booklet reminds shooters 1 MOA is commonly regarded as being equal to one inch at 100yds., but this is wrong. While it may work out all right over shorter distances, 1 MOA actually equals 1.047 in. True MOA measurements are based on degrees and minutes : 360 degrees in a circle, 60 minutes in a degree for a total of 21,600 minutes. And these angular measurements are used to estimate range and correct for bullet drop in the Vortex riflescopes. Hence, 1 MOA will correspond to 1.047 inches at 100yds, 2.1 at 200, 3.15 at 300 and so on.

For this reason, once the distance has been calculated using the HSR-4 glass-etched reticle, or a laser rangefinder, the HSR-4 can be used for rapid holdover correction for bullet drop of a given cartridge and load. Allowance for windage can be estimated using the bars on the centre horizontal crosswire.

The bars are placed in even 2 MOA increments of subtension - and marked at 8,16 and 24 MOA. You only need to know the subtension at 100yds. of each line crossing the main vertical crosswire.

For anyone shooting at targets or animals, the bars are a tremendous help in determining range, holding off for wind and knowing rather than guessing, holdover to make the first round hit. You simply determine ahead of time where each bar, reflects the point of impact.

And, if anyone is so inclined, the same marks can be used to estimate the amount of lead needed for a moving target. But this requires knowing the distance, wind speed and target speed, as well as the total bullet flight time, and rifle lock time. Bullet flight time can be roughly calculated based on muzzle velocities or a ballistic calculator. I'll leave this stuff to more technically-minded readers. Testing of the Vortex Razor began by attaching the scope with the G4-BDC reticle to my Model 70 Winchester in .300 WSM and sighting it to zero the centre dot at 200yds. The I shot the square to verify the accuracy of the 1/4-MOA click adjustments. They not only proved to be very positive, but precise and, more importantly, consistently repeaLable. This is essential when applying ranging data and returning to zero. 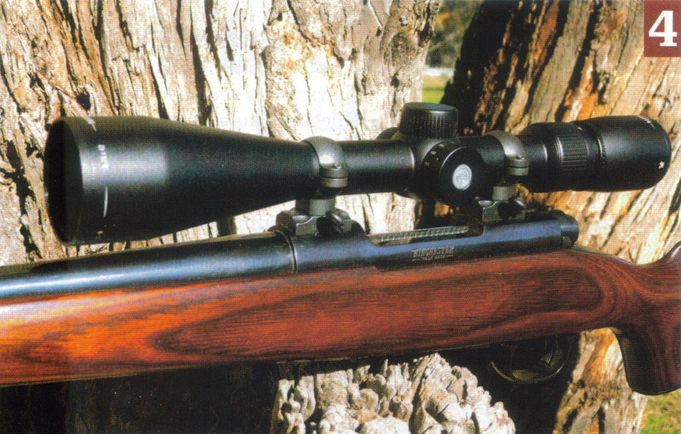 Initial shooting was done on my range but I repaired to the big-bore range to check bullet drop figures out to 600 yards with the power set on 15x.

1. The Vortex Light Hunter scope is a high-range variable with 5-times zoom and BDC reticle.

2. Focusing is done by rotating the eyepiece and locking the setting with a lock ring. Power ring is clearly marked and has thumb piece.

3. Adjustment dials are clearly marked at 1/4 MOA and 1 MOA intervals and for impact direction.

4. Fortesting the Vortex was mounted on a Winchester Model 70 in .300 WSM using Leupold Q/R mounts.

I'd recommend first chronographing your load before using the Vortex software to work out the trajectories since an ammunition chart won't show you exactly where your bullets will strike at long range. There are so many variables. For one thing, small differences in loads and conditions become more apparent farther from the muzzle. In addition, the height of your scope mount affects the relationship of bullet trajectory and line of sight.

Time didn't allow me to range test the HSR-4 reticle, but in all honesty, I'd expect it to work just as well.

Shooting at the longer ranges was carried out on a dull overcast winter's day, but the brilliant image and resolution of the Razor HD's superior optics made aiming easy.

With a little thought, running through the Vortex ballistic software and studying your particular reticle system, you will learn how to make sense of all this and how you can use each bar on game, in every situation quickly. 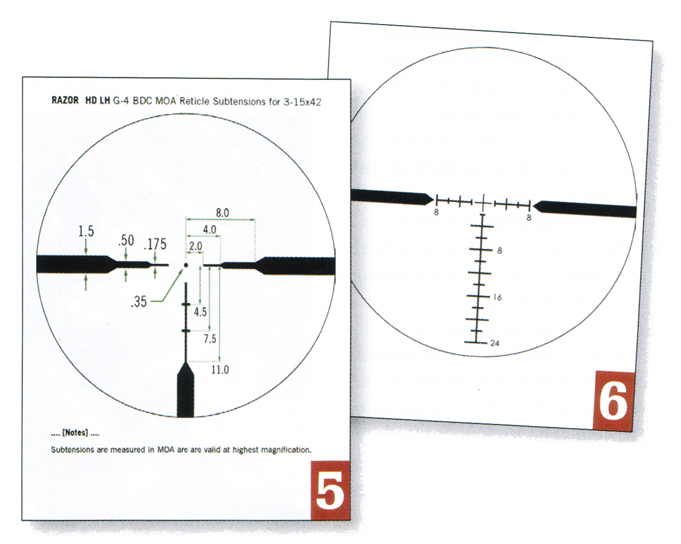