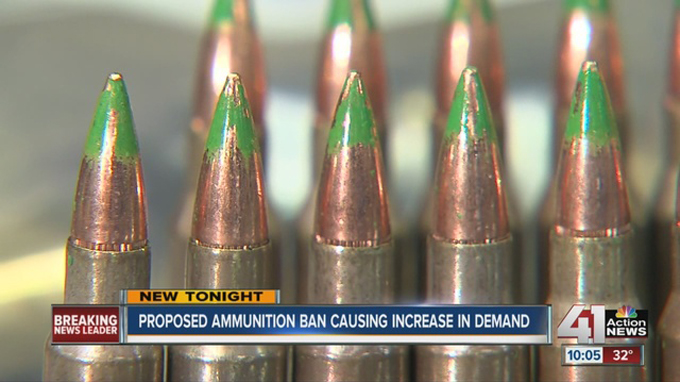 Some readers may have heard of a proposed ban in the USA of a type of 5.56mm (.223) round known a “Green Tip” or M855A1 EPR. The objective of creating the Green Tip Ammunition cartridge was to create an environmentallyfriendly small arms training round after the US Army had been required to remove lead from their bullets to reduce lead accumulation at stateside training ranges.

The lead slug is replaced by a copper alloy slug in a reversedrawn jacket, with a hardened steel penetrator extending beyond the jacket, thereby reducing lead contamination of the environment. The alloy core however, means that the round fits the definition of armour piercing in USA Federal regulations, but for a long time it has been considered exempt from this definition and is popular for sporting purposes.

This issue appears to have come about because of the availability of pistol-sized AR-15 type weapons that could conceivable fire these rounds and the perceived threat to police officers. True armor-piercing handgun ammunition has quite rightly been banned in the USA since 1986 as a way to protect police officers under the Federal Law Enforcement Officers Protection Act.

While it is reasonable for the US government to seek to ban certain categories of ammunition that have (body) armour piercing capability for the safety of its officers, it does cause problems for shooters at large.

Any ammo ban makes gun owners suspicious of where it will lead, particularly when the round concerned is in the most popular calibre and used in one of the most popular types of firearm today (the AR15), a rifle that has drawn the close attention of anti-gun lobbyists. Secondly, the threat of any ammo ban leads to panic buying of all types of ammo in the US, which means supplies dry up, causing shortages here and abroad which is at the far end of the supply chain.

In the USA there are concerns about the way this proposed ban is being handled. There appears to be a very short consultation period, which the NRA is trying to extend. When the Alcohol, Tobacco & Firearms Agency recently published their latest Regulations they “mistakenly” omitted the still current legal exemption for this round. This has lead to accusations that they appear to be going ahead with the ban without proper public consultation.