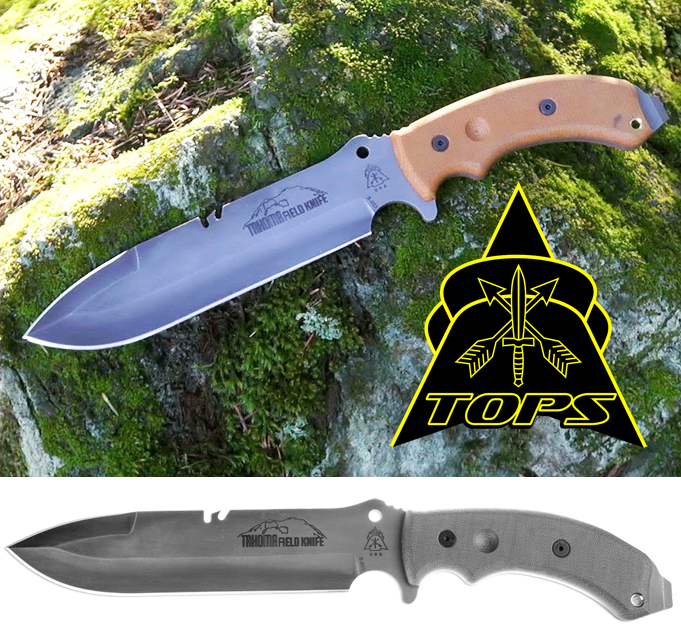 "You can do a small job with a big knife but you can't do a big job with a small knife." I firmly agree with these wise words from late wilderness expert Ron Hood, which is why I always carry a large knife with me on trips into the great outdoors.

When TOPS Knives released the Tahoma by designer Andy Tran, I knew I had to get my hands on one . From the photos alone, I could tell that this knife was well thought-out and just the sort of tool I want by my side for wilderness excursions.

In design, the Tahoma is something of a departure from the highly recognizable TOPS look; in action, however, it's a TOPS classic. In the following story, I'll explain why.

OUT OF THE BOX

The first thing I noticed when I held the Tahoma was the 15-degree cant of the grip from the blade. This gives the knife an ergonomic feel and natural break to the wrist, allowing for prolonged use with minimal fatigue.

The tan canvas Micarta scales include a firebow divot on both sides for ambidextrous use, and the texture makes the handle very grippy even when wet. During my field test, it was raining a bit off and on and at no point did my grip feel compromised.

Tran did not let an inch go to waste on this knife, designing a pry bar with a chisel tip on the pommel so you are not tempted to use the blade itself for prying. Directly in front of the pommel is a lanyard hole, which you can use for secure chopping or for lashing the Tahoma to a limb for use as a spear.

The new Black River Wash finish not only gives the Tahoma very classic styling, but also shows very little wear after all my testing. 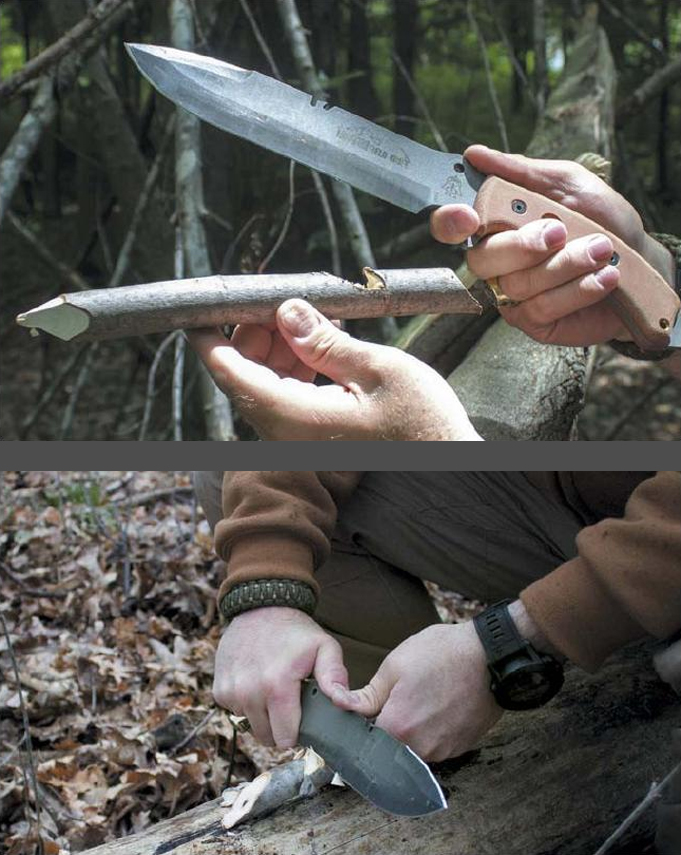 Despite its larger size, the Tahoma had no trouble whittling makeshift tent stakes.

The bone-scoring notch on the spine about 4 inches from the tip wa s very effective, not only serving as a wire breaker and pot hook, but even enabling me to get to the marrow in the leg bone of a deer in under a minute.

"The Tahoma proved itself to be an impressively effective chopper"

The blade and grip are joined by a nice, deep choil that fits the index finger perfectly for choking up on the blade, giving greater control for finer work.

The choil also acts as a nice lashing point when combined with the lanyard hole, included in the thumb ramp positioned directly above on the spine, to lash it to a limb for use as a spear.

The thumb ramp includes jimping on the rear ramp that follows back into the grip.

Unless you are a collector of shelf knives, the true beauty of a knife lies in its performance, and its true value in its mettle (pun intended).

Some knives I pick up and say, "Yeah, this is a nice knife"; other knives immediately get me looking for the closest woods for "play time."

With its classic styling, ergonomic geometry and fresh look, the Tahoma fell easily into the latter category.

Once in my hand, it was obvious the Tahoma was made to be put to work—which I did through a series of specific tasks.

I have never been accused of being an ounce counter, but when I backpack I am extremely aware of any extraneous weight that I can shed in lieu of a makeshift replacement in the field. For example, instead of carrying tent stakes, I make my own.

This job is more easily accomplished with a smaller knife, but by utilizing the deep choil and thumb ramp of the Tahoma I was able to really choke up on the blade and get very good control for making the notch.

The Tahoma was able to pierce about an inch into a stack of leather atop a phone book.

With the larger profile designed for chopping I was able to whittle myself a nice point with just a few light, angled chops. I had tent stakes within a couple minutes, and nothing to carry in or out.

The tent stakes are just one example; you are limited only by your imagination. You can make your own fire spit, camp chair and so on.

My stakes demonstrate a small job the Tahoma can perform, but what it was really designed for are larger jobs that demand the ferocity of an NFL linebacker.

While batoning with a knife is a some - what controversial practice, I feel that a large knife should at least be capable of chopping and splitting firewood.

This is where the Tahoma really excelled. To start, I chopped some downed maple. I was able to get through a piece of dead maple roughly five inches in diameter in just a few minutes.

Over the course of the next couple hours I had chopped a good amount of maple and had no discernable hot spots or fatigue in my hand or wrist.

I also tested the Tahoma's chopping ability on a green limb that was approximately 1.75 inches in diameter (the same as the width of the blade), and it produced a clean cut all the way through.

Moving on to splitting the firewood, the Tahoma was able to make its way through a few knots with very little extra work and without any damage to the edge. 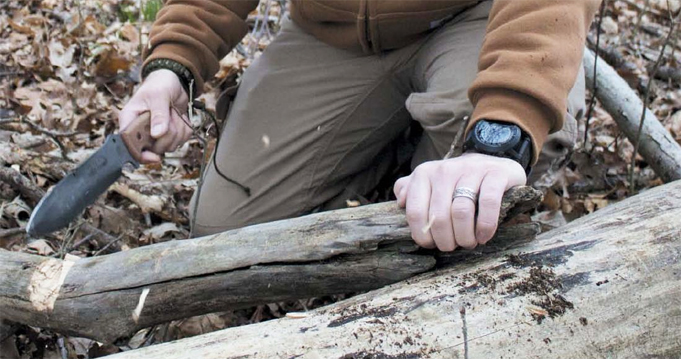 The sharpened top edge was rather detrimental to my baton wood, but if you focus more on the rear of the spine and only use the tip to balance it out, you will be able to prolong the life of your baton.

(If you prefer not to have a top edge, or it's illegal where you to order the Tahoma with a false edge on top instead.)

To get a good idea of the robustness of the Tahoma's edge, I decided to wait until after I was done with all of my other tests to make a fuzz stick.

The blade is finished with TOPS' own Black River Wash. Canvas Micarta scales ensure a secure grip even in wet conditions.

I was very impressed with how it handled even after all the heavy-duty work. I was able to get a good, serviceable fuzz stick in a fairly short amount of time.

I also like to rough my kindling up to help it catch easier; the Tahoma handled this task with exceptional ease.

Because the Tahoma was designed with a spea r tip, no true test of its capabilities would be complete without some form of penetration test.

While preparing for my other tests, I would stick the Tahoma into a nearby log instead of putting it into its sheath, and I was very impressed with how easily it was able to penetrate any wood I stuck it into.

In the interest of science, though, I set up a phone book with two pieces of leather on top for a true test of its stabbing ability.

The Tahoma was able to pierce approximately one inch into the leather and phone book, proving it has some real penetration power.

The angle of the grip had me a little concerned about the comfort of using the Tahoma in a chest-lever grip, so I got a piece of half-inch nylon rope and gave it a pull.

The grip was much more comfortable than I initially believed it would be, and I was able to get through the rope just more than halfway down the blade.

Taking the small hank of rope I had just cut, I used the Tahoma to dice the rope and had a small rat's nest within seconds.

It didn't take long for me to become certain that Andy Tran had a vision when he set out to design the Tahoma—a vision he successfully achieved.

This vision, combined with TOPS Knives' quality and standards, makes for one of the finest, most versatile large knives to hit the market in a long time.

WHAT'S IN A NAME?

The Tahoma'sBlack River Wash finish is named forthe 125-mile Black River, which empties into the eastern end of Lake Ontario. The river's name may have been inspired by the natural tannic acid that darkens the water in some places.

If only Ron Hood were around with one of his frozen elk bones, we could have some real fun with this knife.

In short, I'd be comfortable taking the Tahoma on any trip with me and would have no concerns about its ability to perform when I need it most. See you on the trails.

I rated the Tahoma's performance in each category on a scale of 1 to 5.