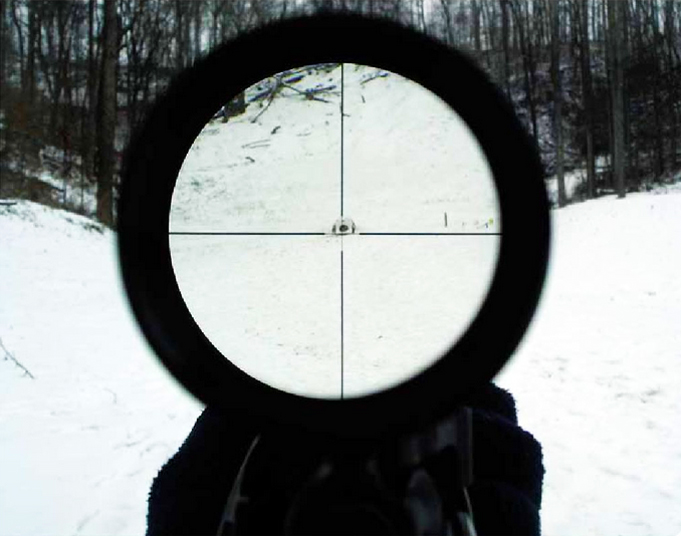 Making things as Large as Life

From a hunter's viewpoint, taking weapons aside, there is not much that has helped his ability to hunt game and make dear, kills more than a telescopic sight. The same thing applies to military weapons I suppose but snipers are another dimension and we will touch or, them later but we are primarily dealing with game animals here.

In its very basic form an optical aiming devise first appeared on, the scene in the 17th century, but the first telescopic rifle sight was first documented towards the middle of the 1800.

This was produced by an American gun maker by the name of Morgan James with the assistance of a civil engineer by the name of John Chapmen, a man familiar with the surveyors' transit. Working together and documenting the process in a book written by Mr. Chapman, they produced what they termed appropriately the Chapman-James Sight.

From Mr. Chapman and Mr. James's invention many other people saw the advantage of a magnifying optical sight and thereafter numerous versions came into being.

As with most new invention what came after the initial brainwave is gradually improved upon as it tends to be a case of the hard work in recognizing a concept being done and anything that comes after is a modification to the original, and so it was with the rifle scope.

Improvements to the quality of the lenses and the magnification had to follow as these are the basics around which an optical sight is designed. However the original design of the Chapman-James sight was deemed to be the best sight manufactured at the time due to the experience of the two original designers.

It was also realized that it would be a great benefit to be able to externally adjust for windage and elevation and so it was that along with this feature the magnification was improved significantly up to 20 times. A gentleman by the name of Mr. Amidor from Vermont produced a sight of such quality that they were used as the standard military riflescope during the American Civil War.

These scopes were unlike the modern day compact scope that we are so used to. There were a few makes of battle rifles used in the US Civil War but probably the four most used were the Lorer.z, Witworth, Enfield, and the Springfield, all of which were percussion cap rifles.

As the hammer was on the outside of the rifle variation of the rifle scope were produced to cater for this. For example the Davidson riflescope was side mounted to enable easier access when cocking the hammer.

The other main physical difference between the scopes of yesteryear and to day is the length. Some of the original scopes were as long as or even longer, than the rifle barrel itself.

After the civil war and during the opening up of the American West the buffalo hunters used rifle scopes on their Sharps and Henry big bore buffalo guns which proved very effective at longer ranges.

Now days the rifle scope has come of age with manufacturers like, Leopold, Swarovski, Schmidt & Bender and Nightforce. In fact it was a Nightforce scope that was used by the Canadian army sniper, Rob Furlong, in Afghanistan who recorded a kill shot out to 2.43km using a McMillan "Big Mac" Tac-50 - .50 caliber sniper rifle.

This shot at one time was the longest recorded kill shot of all times which was later bettered by the British army sniper, Craig Harrison, who made two kill shots, the longest of which was confirmed at 2.47km using an Accuracy International L115A3, 8.59mm caliber sniper rifle fitted with a Schmidt & Bender, 25x magnification - 5-25x56 rifle scope.

These feats of shooting excellence are not only possible due to the weapon or the person sending the round, but it is the rifle scope that ensures the bullet is placed in the vital spot.

At one time rifle scopes just bought your target closer to you, now you car, input the conditions that you are working with and it will calculate the various settings required to make the shot. The required input data is as detailed below.

Given these inputs will enable you to make adjustments to the scopes settings at different ranges depending on, the reticule you are using. Once you have zeroed your scope in, at say 100 meters, then with today's scopes you car, calculate the MOA or minute of angle adjustment that you need to make at various target distances.

The greater the distance, of course, then the greater will be the MOA adjustment on your scope and as a rule each click on your scope is ¼ MOA. This will depend on the type of scope you're using as scopes do differ, but ¼ MOA per click is normal.

We have been mainly speaking of rifles so far but with today's handgun capability and the fact that more and more people are hunting with handguns, we see that scopes are readily available for just such hunting weapons, and in fact they have been available for handgun mounting since the late 1800s.

It is not uncommon these days to see articles in almost every hunting and shooting magazine you pick up that feature handguns fitted with optical sights. The big game handguns for instance, like the Smith and Wesson .50 calibers, or the Magnum Research 45-70, are factory fitted with the ability to fit scopes.

Guns such as these are powerful enough to shoot out to relative extended ranges where a scoped sight is a definite advantage. Another reason for using a scope on a handgun when you're hunting big game is that you are able to see more clearly where the best shot placement is.

You may be in brush or undergrowth and are likely to be somewhat closer to your intended target thar, you would be if you were hunting with a rifle, therefore time is of the essence. Lets take the extreme situation and you are on safari looking to take a trophy Cape buffalo, then with a rifle you can stay back to 200 yards or so and take your time glassing it and estimating the best shot situation.

Also the option to stay unobserved is a lot greater than if you are hunting with a handgun at say 40 yards. So by keeping your eye on the buffalo through your scope rather than putting your gun down, picking up your binoculars then checking to see what the animal is doing, you can check him out through your handgun mounted scope and be ready in an instant to take your shot OK maybe the scope is not as efficient at scanning the target as a pair of binoculars, but at 40 yards it really doesn't matter.

When out shooting game animals at long distances, yes the scope will help us deliver an ethical shot, but there is still a limit to what it and you can achieve. So make sure that all the criteria in terms of your rifle or handgun ability, ammunition suitability and your own shooting ability is met before you go relying on the scope to make you a better shot because it is all matter of teamwork. But as we all agree I think, the rifle or handgun scope is a vital part of that team.