The Hogue X5 Kinves Dominates In Self Defense 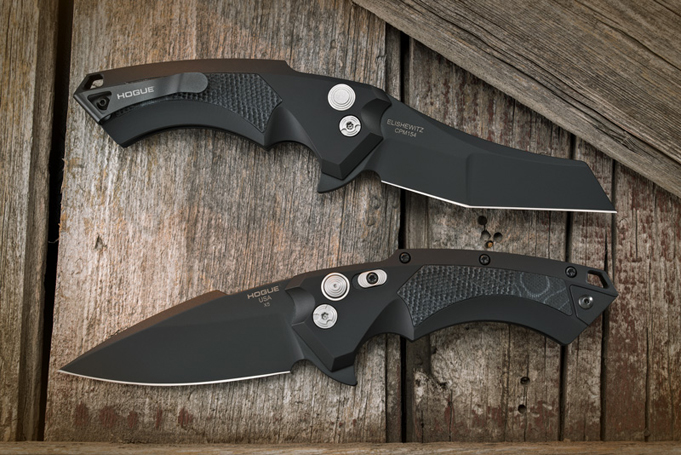 ABOVE : The X5 is available with a modified Warncliffe (top) and a spear-point blade (bottom).

If you know anything at all about guns, you've no doubt heard of Hogue, Inc. Since 1968, Hogue has been an industry leader in the design and manufacture of high-quality handgun grips, rifle and shotgun stocks, and a variety of other products. A family-run company, they are extremely good at everything they do. When they decided to branch into the knife market several years ago, I expected to be impressed. I was not disappointed.

Hogue's recipe for success was simple, yet profound: Recruit renowned custom knifemaker, Allen Elishewitz, as their designer. Then, combine his talents and insights with generations of world-class machining expertise and an uncompromising commitment to quality. The result was a truly exceptional line of cutting tools that are both innovative and incredibly well made.

And that trend shows no signs of slowing down, as evidenced by their newest design: the Hogue X5.

Designed by Elishewitz and engineered by Hogue Tool and Machine Company president Jim Bruhns, the X5 is a stylish flipper-opening folder with a button-lock mechanism and secondary safety. It is available with a choice of two different blade styles—a spear point with a high flat grind and raised swedge—and a modified Wharncliffe with a meticulously executed faceted flat grind.

Both versions are also available in two sizes—one with a 3.5-inch blade and one with a 4-inch blade. All X5 blades are machined from 0.150- inch-thick CPM 154 particle metallurgy stainless steel hardened to RC57-59 and cloaked in a black Cerakote coating.

The X5's flawlessly machined handle is crafted from 6061-T6 aluminum that is black anodized and contains twin-inlaid scales of black G-Mascus G10. The forward portion of the scales feature a machined stippled texture for a secure grip, while the rear section is machined smooth to complement a deep-pocket carry clip for a snag-free draw.

Since the curved clip follows the arcing flow of the handle, it cannot be reversed for left-side carry, instead, a second, dedicated left-side clip is supplied with every knife. Both clips nest into recesses in the butt end of the handle and are secured by a stout Torx screw. A "filler" plate is also provided to fill the off-side clip recess.

The blade and handle of the X5 are joined by a button-lock (aka "plunge-lock") mechanism reminiscent of that typically seen in automatic knives. Since the X5 is a manual-opening knife, the button lock only engages when the blade is open. Similarly, its sliding secondary safety, which prevents accidental lock release, can only be engaged when the knife is open.

Compared to other button-locks, Hogue's mechanism is over-engineered to be more robust and offer smoother operation. Its bearing surfaces mate precisely and engage completely, even when opened dead slow—an important quality for any knife suited for defensive use. Lock-up is rock solid with absolutely zero vertical or lateral blade play.

Just as importantly, the lock releases smoothly and easily, and the knife can be safely closed without placing your fingers in the path of the cutting edge. The sliding safety engages and disengages with a distinctive "click" of the detent and, when engaged, makes unintentional release of the button lock impossible.

Although combining a flipper-style opener with a button-lock mechanism is not an entirely new idea, it has never been done as well as the Hogue X5. An effective flipper mechanism is all about balancing the detent engagement - the mechanical pressure that keeps the blade closed—against the leverage of the flipper to create a sudden release that launches the blade reliably into the open position. Most flippers do this by using the lock mechanism itself to generate pressure for the detent. 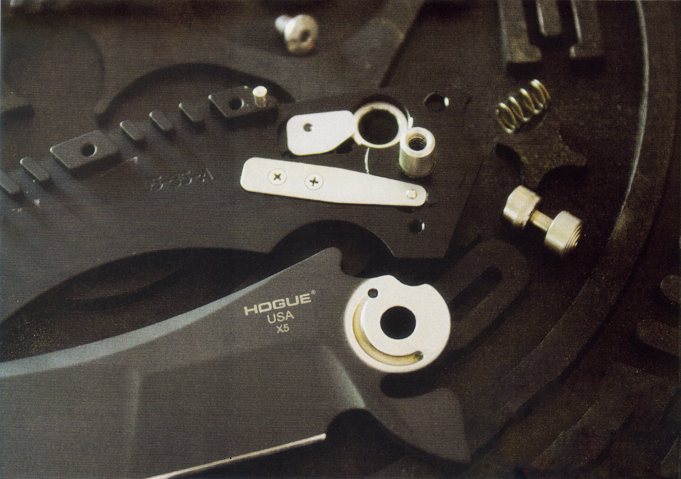 ABOVE : This disassembled view clearly shows the X5's separate detent spring bar. The detent hole and the "drag relief channel" that prevents the detent ball from dragging on the blade during the opening arc. Note also that the Cerakote coating has been removed from the tang to ensure smooth operation.

Unfortunately, this often requires less-than-ideal placement of the detent ball and also causes highly focused friction of the ball against the tang of the blade during its opening arc. If you've ever disassembled a flipper (or other liner or frame-lock knife) and seen the arced scratch mark of the detent ball on the tang, you know what I'm talking about. This focused friction of the ball, which occurs when the lock spring is under maximum tension, inhibits the motion of the blade and is the most common cause of failed openings and incomplete lock engagement.

Hogue's patent-pending approach to ensuring optimal detent tension is brilliantly different. Rather than using the spring tension of the button lock, they use a dedicated ball detent spring plate nested into the obverse handle scale. It contains the detent ball and a tension screw that allows them to perfectly calibrate the detenl tension during assembly. 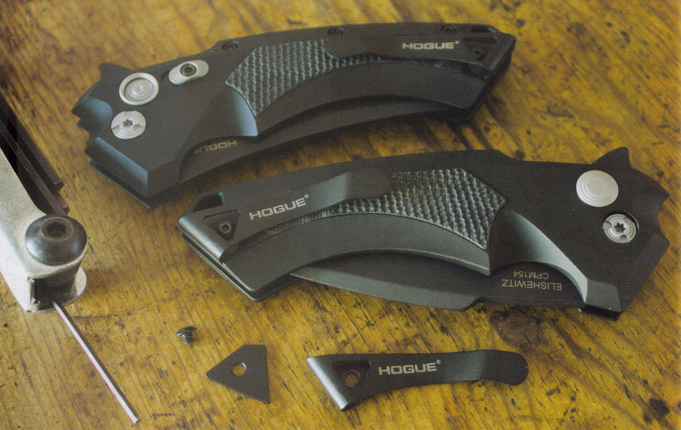 ABOVE : Despite its curved handle shape, the X5 is still capable of left - or right-side tip-up carry because it comes complete with two mirror-image clips. A filler plate is also provided to fill the unused clip recess. Note that unlike the Torx screws used to assemble the knife, the clip screw is a hex configuration.

The combined effect of all this engineering magic is a flipper opening that feels more like the surprise break of a custom gun trigger than the opening of a knife. 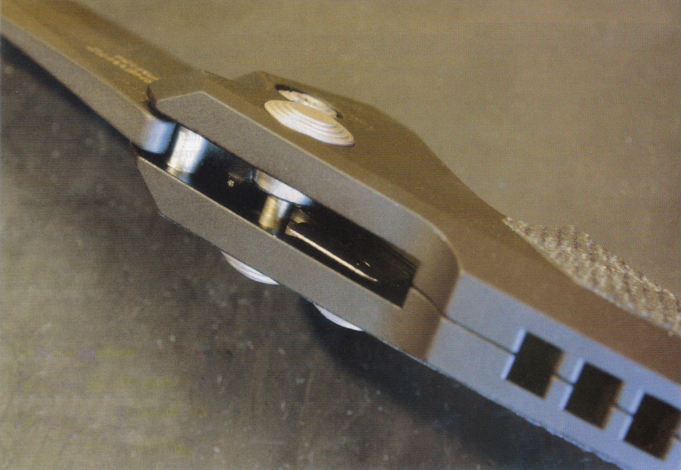 ABOVE : This close-up view of the X5's lock shows the robust construction of the button, the sliding secondary safety and the separate detent spring bar. The lock-up on this knife is rock solid without a hint of play.

However, as it does, the detent ball then drops into the drag relief channel, completely removing its friction on the tang of the blade and ensuring a smooth opening and positive lock-up.

I received review samples of both versions of the X5 while I was deep in the process of packing to move to a new home. Sorting through 20 years of accumulated stuff, packing the good stuff into boxes, and organizing those boxes into a moving pod gave me countless opportunities to draw, open, cut with, and close the X5.

From a carry perspective, its deep-pocket clip truly lives up to its name. In fact, the angle of the butt end of the knife matches the angle of a typical pocket so well that the knife is almost invisible. Initially, that made drawing the knife a bit more challenging, until I started hooking my index finger on the tip of the clip to lift the knife out of the pocket. 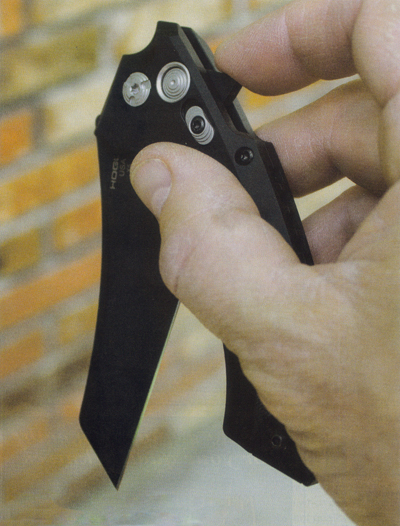 The flipper action of the X5 offers an outstanding balance of leverage and detent tension for reliable, consistent one-handed openings.

This technique relieved the tension on the clip, allowing a smooth draw that left the knife perfectly positioned for a flipper opening. Unlike a thumb opening using a stud, hole, or disk that requires you to "choke up" on the handle to have enough thumb extension to open the blade fully, the rearward pull on the flipper is also more forgiving of a shallow grip.

The outstanding flipper action of the X5 proved extremely reliable and consistent, and in hundreds of openings I experienced no "short stroke" failures. The blade opened and locked solidly every time. Cutting performance was excellent and the edge geometry of the high-ground bevels of both blade designs cut cleanly on tape, cardboard, rope, twine and anything else I put in the X5's path. When the cut was done, safe one-handed closing of the blade was a breeze. With very little practice, the combined act of draw, open, cut, close and pocket flowed seamlessly.

From a defensive standpoint, the X5 was extremely secure in both standard grip and reverse grip and cut very well on a variety of test targets.

The flipper makes a highly effective guard that, along with the refined ergonomics of the handle, literally locks the knife into the user's hand.

The only minor issue I noticed was that the transition point from the index-finger choil to the long concave arc of the handle was a bit pointy and created a minor "hot spot" when gripped hard.

The Hogue X5 is an impressive synergy of innovative design, advanced engineering and world-class manufacturing quality. If you're in the market for a stylish, full-service flipper folder that's ready for anything, look no further.

One of the challenges of manufacturing any quick-opening folding knife is ensuring that it complies with the knife laws in as many jurisdictions as possible. For manual folding knives, one of the primary concerns is making sure that they have a bias toward closure and cannot be too easily opened by inprtia or the proverbial "flick of the wrist."

Interestingly, a number of common lock mechanisms that serve as both the blade lock and the detent to keep it closed walk very close to the edge of legality per the definition of the federal switchblade act. Specifically, that language reads:

Locks that also serve as the detent to keep the blade closed can often be opened inertially by applying pressure to the lock release when the blade is closed. This pressure functionally removes the detent pressure on the blade, allowing it to swing freely and making an inertial opening a breeze.

To my knowledge, this legal vulnerability has never been challenged, but that potential is certainly there Hogue's use of a separate detent spring bar makes the X5 impossible to open in this way. Even if the lock release button is depressed with the blade closed, that action has no effect on the detent mechanism and the blade remains solidly closed. if you like the idea of stacking all the odds—including the legal ones-in your favor, the Hogue X5 is a great choice.