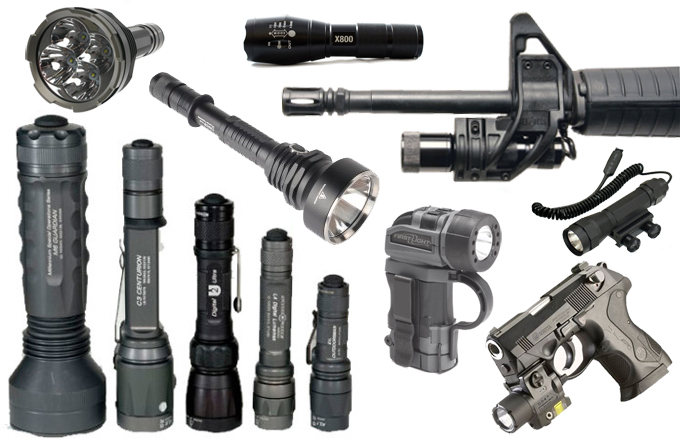 A selection of tactical LED flashlight reviews to assist you in choosing the right flashlight for your particular tactical purpose.

The DLC was designed to meet the modern and unique demands of both the police and military. Now Brite Strike has become the tactical LED flashlight choice of many professionals and security agencies. The compact (weighing approximately 12.3 ounces and measuring 7.5 inches long) rechargeable duty light with built-in video recorder and audio provides the ideal light and video resolution needed to capture engagement while providing light on the subject. The Brite Strike DLC 200 Flashlight video recorder holds up to six hours of recordings.

The DLC LED flashlight has High, Low, and Strobe settings. Recharge the lithium battery with the included 12-volt vehicle charger. Inside the body of the DLC LED tactical flashlight sits a vibration-isolated microphone for clear audio recording. A removable rubber cap covers the microphone when not in use, keeping dust and water out. Optional colored flashlight lenses are available for the DLC and sold separately. There is also a belt mount (ROTO-LOC Holster) for the LED flashlight allowing hands free operation, much like the police sholder mounted cameras (body worn cameras), but the benefit of having the bright light far enough from your face as to not disctract concentration. Suggested retail price of the Brite Strike DLC 200 Flashlight is $500. 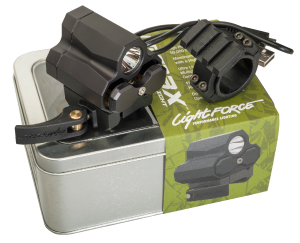 Lightforce have recently released a new, compact mini-spotlight system which will quickly and simply attach to a rifle or shotgun for night hunters, that doesn't require any leads or a separate battery packto operate. Referred to as the PRED-3X its extremely lightweight and made of high grade 6061 aluminium. Featuring a toughened, ultra-clear glass lens and specially treated aluminium reflector for focused beam and maximum light transmission, it offers a 220 Lumen LED with 50,000 hours life span via 2 x rechargeable batteries housed within the unit. This light has been fitted with authentic CREE chips Color Rendering Index (CRI), chosen for its ability to produce a neutral, white light, resulting in superior target acquisition and colour definition. 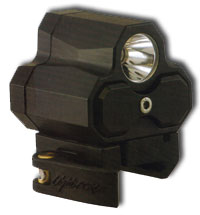 I'm told the two fully charged batteries will provide up to 90 minutes of maximum light intensity, while the unit will also operate using only a single battery for reduced operating time. The Pred3X can also be connected to an external power source via the USB cable provided for extended periods. This cable also acts as a charging unit when the batteries require recharging via any 5 volt supply like a mobile phone charger or computer. The centre of the on/off switch actually features an indicator which turns red when the batteries are being charged and once fully charged the light simply goes out. Re-charging time is approximately 3 hours. To fit the Pred3X to a rifle, the unit comes complete with a quick release mechanism that attaches to a supplied scope ring via Picatinny/Weaver attachment.

Previously we have reviewed and tested several Led Lenser torches with excellent results.

Well here's another new model that promises to outshine any light of its size. The Led Lenser P7 Tactical is equipped with an advanced focussing system that is unique to Led Lenser. The P7 Tactical offers a circular floodlight or a sharply focused spot beam with a range of up to 200 meters I'm told. It's simple three-step cycle switch function is designed for one-handed speed. Simply press for maximum light (130% - turbo mode), click for high light (100% - power mode) or click again for low light (15% - economy mode).

Designed in Germany, the P7 Tactical light comes with 200 lumens of light and it doesn't get much brighter than that. The torch also offers up to 120 hours of battery life via 4 x standard AAA batteries.

Made of high-grade aluminium body, the Led Lenser P7 Tactical is available in either black or titanium finish. Also included is a nylon pouch and well presented in a black, gift box.

Introducing the M3R, a tiny rechargeable torch (weighing only 45g and less than 10 cm long) but big on brightness. With 220 lumens of light (more than the original LED Lenser P7!) and with a beam range of 130 metres, it produces a performance comparable to torches many times larger.

With easy recharging via USB and a low battery warning system, the M3R is technological dynamite in a compact package. For ultimate versatility, the M3R also operates on a standard AAA battery. 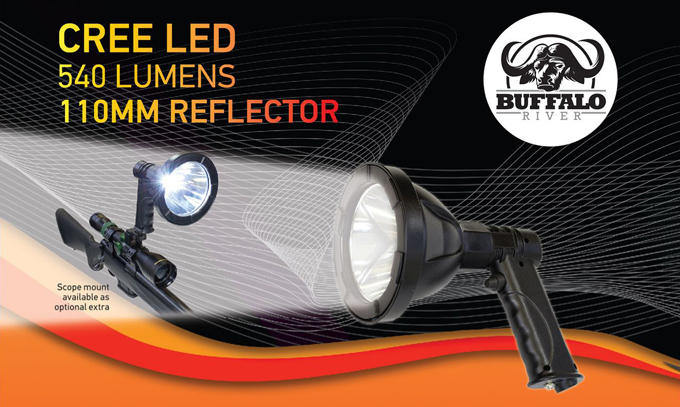 IT’S NOT OFTEN YOU COME ACROSS A PRODUCT THAT REALLY DOES BREAK THE MOULD AND RENDER ALL OTHER SIMILAR PRODUCTS OBSOLETE OVERNIGHT, BUT THE CREE T6, MADE IN THE USA AND MARKETED BY BUFFALO RIVER AS THE BRT61, IS SUCH A PRODUCT.

When I was handed the new Buffalo River spotlight kit I asked if I could have battery to go with it. “You’re holding it!” I was told. And there it was, so discrete that I hadn’t noticed the small black box clipped to the end of the power cord.

The battery fits easily into a shirt pocket – you can put two of them into a jacket pocket.

Measuring just 110mm x 65mm x 25mm, the new lithium battery is about a quarter of the size of a standard spotlight battery, and wait for it – eight times lighter! The 12v motorcycle-type batteries I’ve been using ever since spotlights were invented weigh just over 2kg each, and I normally carry them in a bag hung over my shoulder, whereas the new Cree T6 weighs just 260 grams and fits comfortably into my shirt pocket. There’s no such thing as a free lunch, so I figured there had to be a drawback somewhere – maybe the battery had only enough power to run a good sized light for a couple of minutes, but on the box it proclaims, “2.5 hours of light between recharging”.

I haven’t yet used it to the max, but on a hour-long possum hunting trip it showed no signs of running flat, and considering that the beam the 110mm diameter spotlight throws is tight, bright and strong for over 200 metres (the box says 300 metres, but you can’t expect two miracles in a row), I think this is outstanding performance. Not only is the new lithium battery extremely light and compact, it’s rechargeable as indicated above (a charger comes with the kit), and has one other very useful feature – a small LED display that reveals the battery’s state of charge.

The charger, and an attachment for mounting the hand-held light onto a scope.

Press a button at the end of the unit and the battery’s status is indicated. Five green lights means full charging, four green and one red means you’ve got 80% of charge left, and you can figure out the rest. The light that came with the kit was hand-held model with a pistol grip and an adaptor that allowed it to be clipped onto a scope.

The Cree battery, left, shown beside a standard motorcycle spotlight battery for comparison, has an LED display that indicates its charge status.

This set-up mounts the light very high above your rifle and is a bit cumbersome. I understand that other models and attachments are, or soon will be, available that make fitting the light onto your rifle more convenient. 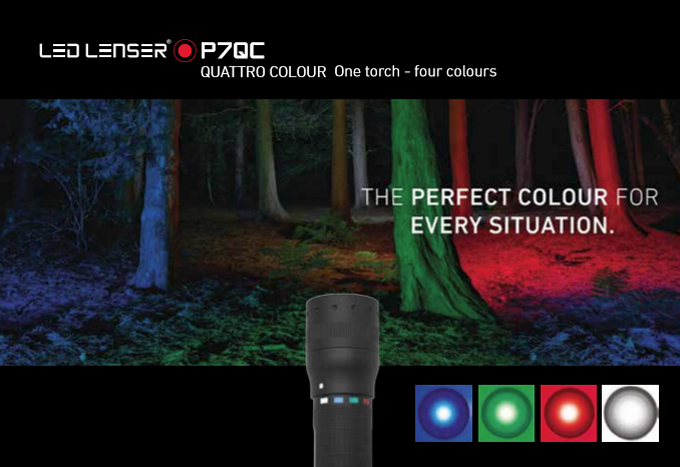 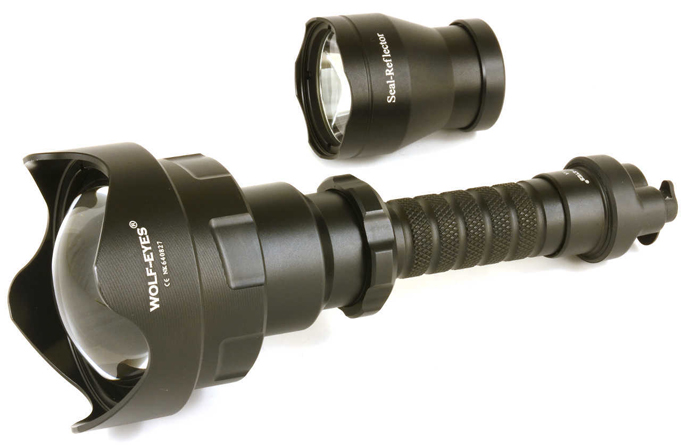 The Seal High Intensity LED torch looks exactly the same as the Seal Original, the only difference is where the Original is rated for 400 metres the High Intensity is good for 500 metres. Of course, a 500 metre light also provides more light when being used at 200 metres! So now there arc two versions of the Seal to suit different users needs.

The Seal High Intensity LED Hunting torch features a more focussed, de-domed LED which is able to project further through the large aspheric head - with the naked eye you can see it light up a white card at 500 metres! This LED isn't compatible with the small reflector head, so this version is for those who want the longest throwing hunting torch, small acreage or professional security torch or a search and rescue torch.