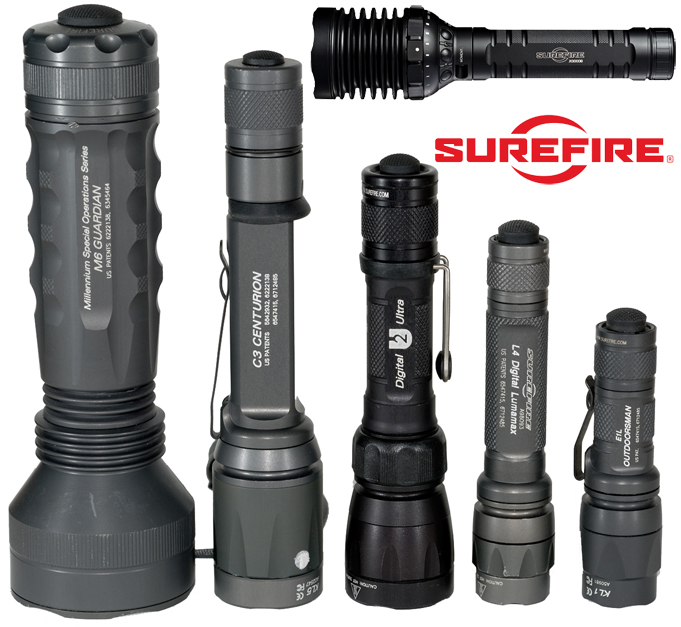 The new Annihilator is a heavy-duty, extended-range, variable output rechargeable LED flashlight that produces a blinding 4,000 lumens at the maximum power setting.

An 11-position power-output selector ring allows lower levels of illumination to be selected. Constructed from mil-spec anodized aluminum alloy, it can be activated from a tail-cap switch or constant on bezel switches. It also features a "fuel gauge" to show remaining power.

The new UDR Dominator is another rechargeable high-variable output LED flashlight that features a "fuel gauge," but it can also be powered by 12 lithium 123A batteries if required.

It produces 2,000 lumens at maximum power, with an 11 - position variable power output switch. It offers momentary or continuous operation, and includes a strobe setting.

Constructed from mil-spec aluminum alloy, it is activated by the new OMNI Switch tail cap that allows momentary on by a light sideways press, in any direction, of the tail-cap switch or continuous-on by rotating the rear switch.

A disable mode is offered to prevent momentary-on due to accidental activation.

Surefire PX2 Weaponlight Kit is a more compact version of the P3X. It offers the same features but uses two 123A lithium batteries to produce 600 lumens. SureFire's DSF (Dedicated Shotgun Forend) weapon light has been redesigned.

Available for Remington 870, Benelli M1 and M2, Winchester Defender 1200 and 1300, the FN F-12 SPX, and the Mossberg 500 with the 7-3/4-inch forend tube, they are lighter in weight and offer an output mode selector that lets the operator choose between a 500-lumen maximum output or a 200 - lumen output setting.

Three new models join SureFire's popular X-Series this year. Like all X-Series weapon lights, they are Picatinny-rail-mounted and compatible with handguns or long guns via the use of optional switch-accessory components.

The X300 V is a dual-spectrum weapon light that allows the operator to select either a 150-lumen white light or infrared illumination for use with NV devices. The self-locking head allows quick switching, with a disable setting to prevent accidental activation.

The new VI Vampire is a compact version of the dual-spectrum V2 Vampire. This LED light offers a 120-lumen white light of 100 milliwatts of IR illumination for use with NV devices via a self-locking head and a two-stage tail-cap switch. This low-profile light features a convenient steel pocket clip.

The Surefire 2211 Luminox wristwatch is a self-illuminating timepiece that features a built-in 180-lumen white LED light with a second, low-power setting.

Designed to automatically align with the handgun in a normal two-handed tiring grip, it uses a simple micro USB port for recharging. A "fuel gauge" confirms charge level.

The new M600IB utilizes SureFire's proprietary IntelliBeam Technology—an intelligent sensor and microprocessor-based system that continuously evaluates the environment where the beam is aimed - to automatically adjust the light output to the optimal level, between 100 and 600 lumens, faster than the human eye can detect.

The M600IB's high-performance LED and parabolic reflector create a smooth, highly useful beam. The tail-cap switch offers momentary and constant-on modes. Like all Scout lights, the light has a hardcoat anodized aluminum body for durability.

In a tumultuous tale that has rocked the tactical lighting industry. The new 6P* LED flashlight,the next generation of the legendary 6P, we given a clean bill of health today in what is being hailed as the first drug test on an inanimate object. Cries of foul play were raised upon the release of the powerful new 6P LED when it dazzled everyone with it's brilliant white light, 20% increase in output, and an 1100% increase on run time. The 6P LED has been undergoing intense steroid testing ever since.

"We were shocked when the Science and Standard Oversight Committee (www.ssoc.eu) requested the 6P LED be rested for performance-enhancing drugs" a company spokesperson for SureFire said.

"Due to it's value pricing, massive 80-lumen output and 11 hour run-time, aircraft grade aluminum, and virtually unbreakable LED with electronic power regulation circuitry, the 6P was an immediate hit with law enforcement and military professionals. Therefore, the accusations of steroid abuse were all the more serious. We were eager to clear our good name and decided to comply with testing. We're glad our good reputation has been restored, and we're beyond these false and upsetting accusations. Now we can focus on what we do best."

After over 200 hours of testing and 40 vigorous tests, the results were that no conclusive evidence of performance enhancing drugs or foul play of any kind could be tied to the 6P LED flashlight.

Key Features Of The 6P Flashlight

Virtually indestructible light emitting diode has no filament to burn out or break and lasts for thousands of hours.
Primary source of steroid allegation.