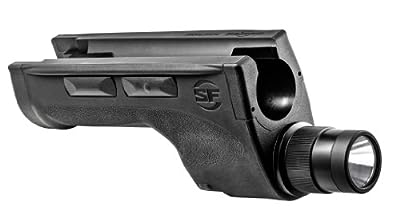 Price: Click Button for Price
As of 2023-01-26 20:52:27 UTC (more info)
Product prices and availability are accurate as of 2023-01-26 20:52:27 UTC and are subject to change. Any price and availability information displayed on https://www.amazon.com/ at the time of purchase will apply to the purchase of this product.
Availability: Not Available Discontinued
Product Information (more info)
CERTAIN CONTENT THAT APPEARS ON THIS SITE COMES FROM AMAZON SERVICES LLC. THIS CONTENT IS PROVIDED 'AS IS' AND IS SUBJECT TO CHANGE OR REMOVAL AT ANY TIME.

With so many competing tactical, combat and survival products on offer recently, it is good to have a name that you can recognize. The SureFire DSF-1300/F12 Dedicated Shotgun Forend WeaponLight for Winchester/FN Shotguns is certainly all that and will be a sound buy for your combat kit or tactical ability.

We pride ourselves to provide the highest quality military gear for all your front line requirements.

For this low price, the SureFire DSF-1300/F12 Dedicated Shotgun Forend WeaponLight for Winchester/FN Shotguns comes highly respected and is a favored choice amongst most like minded people. SureFire have passed on some great touches and this equals good value for money.

The SureFire DSF-1300/ F12 is designed to change the factory forend of the Winchester/FN shotguns. It features an ultra-high-output, recoil-proof LED that generates 600 blinding lumens of white light on its optimum setting and 200 lumens of tactical light with almost twice the runtime on its high setting. A precision reflector focuses the LED's light into a smooth, intense beam with sufficient reach and lots of peripheral illumination for close- to medium-range applications. The slim, light-weight polymer forend is textured for a favorable hold and features an ergonomic output-mode-selector switch, ambidextrous short-lived- and constant-on switching and a system-disable switch to prevent unintentional activation. Setting the LED's output level is just a matter of triggering the light in constant-on mode and then pressing the selector switch until the desired output (600 or 200 lumens) is set-the set output level can then be left in constant-on mode or switched to momentary-on. Supplying unmatched versatility, sturdiness, illumination and control, the DSF-1300/ F12 is the ultimate Weapon Light for 1300/F12 fight shotguns.