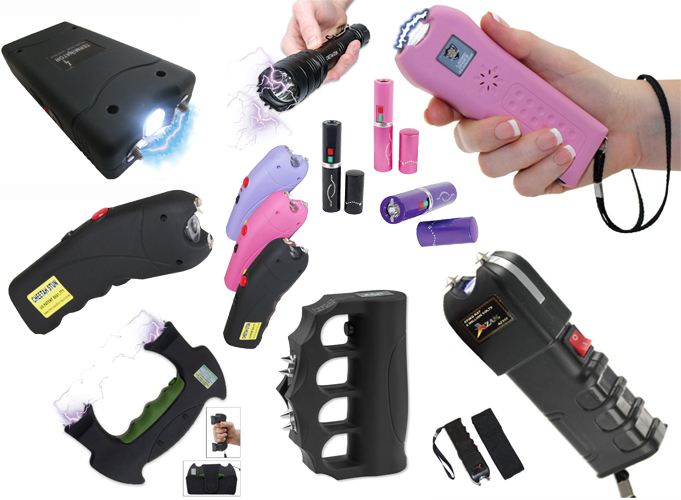 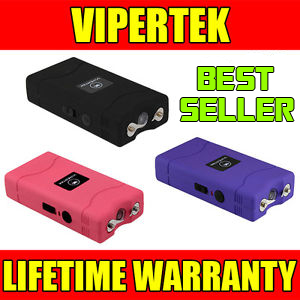 Just test firing this unit into the air is often enough to stop an attacker. As the bright electric current pulsates between the test prongs and creates an intimidating electrical crackling sound, an attacker with any sense at all will be stopped in his tracks.

If the sight and sound doesn't stop him, a jolt from this stun gun certainly will bring an attacker down. When an attacker is touched by the stun gun it will disrupt the message the brain sends to the voluntary muscles.

Simply touching an attacker will deliver a high voltage shock causing loss of balance and muscle control, confusion, and disorientation bringing him to his knees and making him incapable of further aggressive activity.

The STUN MASTER® LI'L GUY 12 MILLION VOLT STUN GUN WITH FLASHLIGHT and Nylon Holster. This little stun gun is small and compact with 4.4 milliamps depending on the charge of the batteries. It has a super bright LED flashlight, built-in charger, and comes with a nylon case. Don't let the name Stun Master* Li'l Guy fool you, It has a beast inside just waiting to be released. Just press the shock button and the Li'l Guy unleashes 12 Million volts out of the metal probes. The safety switch is off when in the down position, middle position is the super bright LED flashlight, and in the up position the shock is turned on once the trigger is pressed. Available in 9 colors: Black, Pink, Purple, Red, Blue, Green, Snake Skin, Animal Print, and flower Design. Matching leatherette holster sold separately. LIFETIME WARRANTY

If they touch anywhere near the screws on the barrel of the stun baton they will be shocked and forced to let go. 4.4 milliamps depending on the charge of the batteries. LIFETIME WARRANTY.

STUN MASTER® 12 MILLION VOLT STUN BATON - The rubberized coating ensures a firm grip and the strips down the barrel of the stun baton release a hellish shock to anyone trying to take the baton from you. It is rechargeable and has a super bright 3 function flashlight with 3 modes: a high beam, low beam, and strobe. The baton has a wrist strap with disable pin that prevents the stun gun from functioning if the baton gets taken away from you during an attack. Includes wrist strap disable pin, wall charger, and nylon holster. 4.6 milliamps depending on the charge of the battery. Available in 3 colors: Black, Pink, and Purple. LIFETIME WARRANTY.

The STUN MASTER® HOT SHOT is only 3 inches long and looks like a Blackberry or other hand-held mobile device. With a dazzling 11 million volts, it has the effect of a baseball bat, combined with the element of surprise. This uniquely designed stun gun is equipped with a safety on/off switch and an illuminated red light that tells you it's ready to unleash pain on your attacker. Uses 3 Lithium CR123A batteries (included free), a $10.00 value. Comes with a free nylon holster with belt loop. 48 milliamps depending on the freshness of the batteries. LIFETIME WARRANTY.

STUN MASTER® 20 MILLION VOLT BAD ASS METAL STUN BATON and FLASHLIGHT - Blind, Buzz and Bash! Introducing the all new Stun Master* Bad Ass! This 3 in 1 baton is the first combination of its kind made out of aircraft quality aluminum. It features a high end tactical flashlight and a powerful 20 million volt blast of electricity that will put the biggest, baddest attacker on well.... his ass.

Often imitated but never quite duplicated, the Bad Ass Baton is made of some of the strongest material known to man. The 120 Lumen super bright LED flashlight will provide that beacon of light in a dark and scary world. With its firm rubberized grip and wrist strap, the Bad Ass Baton can easily be used as a heavy duty clubber. At the front end of the baton is a jaw dropping 20 million volt stun gun. The baton emits an electrifying shock with the simple ease of pushing a button. 4.9 milliamps depending on the charge of the batteries. The baton includes charger cord. LIFETIME WARRANTY.

The STUN MASTER® 15 MILLION VOLT MINI BADASS FLASHLIGHT STUN GUN is made of high quality aircraft aluminum and delivers a shocking blow when used as a stun gun, flashlight, or baton, You can carry 15 million volts of stopping power almost anywhere with no one even knowing because the stun gun is concealed in the flashlight. Light up any attacker and leave them wishing they had never approached you. 4.7 milliamps depending on the charge of the batteries. LIFETIME WARRANTY.

The STUN MASTER® COVERT STUN GUN FLASHLIGHT is a great addition to your arsenal for self defense. The hidden probes make it look like it is just an ordinary flashlight. If given the chance this ordinary looking flashlight will pump 9 million volts right into any attacker, it is rechargeable in two different ways. It can be charged with the supplied wall charger and a cigarette lighter adaptor so it can be charged on the go. It comes with a standard wrist strap and has a rubberized coating to help secure a firm grip. 4.7 milliamps depending on the charge of the batteries. LIFETIME WARRANTY.

The STUN MASTER® 18 MILLION VOLT FLASHLIGHT STUN GUN with MOBILE CHARGER is made of high quality aircraft aluminum and delivers a shocking blow when used as a stun gun, flashlight, or baton. You can carry 18 million volts of stopping power almost anywhere with no one even knowing because the stun gun is concealed in the flashlight.

It has a built-in USB charger to charge iPods, iPad, iPhone, iPhone 5S, and a mini USB to charge most other smart phones. It also comes with a wall wall charger. Light up any attacker and leave them wishing they had never approached you. 4.6 milliamps depending on the charge of the batteries. LIFETIME WARRANTY.

The new and improved MULTIPURPOSE 10 MILLION VOLT STUN ALARM FLASHLIGHT is rechargeable and has LED bulbs in the flashlight. It features a stun gun function, 150 db alarm with steady red light, bright led flash light, led red flash light, led red flashing light for signaling, and shoulder strap. This is a great item for police, security, and for self defense. 4.8 milliamps depending on the charge of the battery. LIFETIME WARRANTY.

The KNUCLE BLASTER is a 950,000 Volt stun gun designed to give you a punch with power. Just touch your attacker to instantly repel them and give you time to get away. Longer contact will cause further disorientation and after some seconds may drop them to their knees.

designed to allow quick access and deployment of this amazing stun weapon.

Blaster stun gun you can flip off the safety and fire with the same hand. No need to use two hands. One year warranty

THE RECHARGEABLE 20 MILLION VOLT RUNT STUN GUNS now has an LED flashlight and wrist strap disable pin. It's easily concealable, and virtually undetectable in the hand of a woman or a man. The Runt uses a new cutting edge micro-technology to deliver super powere d protection. You can carry the Runt in your hand or pocket. It also has a rubberized coating for a better grip. If you would like to wear it like a cell phone there is a heavy duty nylon belt loop holster included. Available in 6 colors: Black, Pink, Red, Purple, Green, and Blue. Specifications: 4.5 milliamps depending on the charge of the batteries, 20,000,000 volts, Rechargeable.

TASER (not for sale)

The TASER Electronic Control Devices are non-lethal, self-defense alternatives that are almost 100% effective.

They combine the injury reducing benefits of traditional stun technology with a quantum leap in stopping power via new Electro-Muscular Disruption (EMD) technology. In police studies, TASEP®electronic control devices have a higher instant incapacitation rate than a 9mm hand gun.

The TASEP® control devices use replaceable cartridges which contain compressed nitrogen to deploy two small probes that attach to the main unit by insulated conductive wires with a maximum length of 15 feet. 50,000 volts travels over the wires and overrides the central nervous system providing incredible take down power. The energy can penetrate up to two cumulative inches of clothing.

These devices can stop a threat up to 15 feet away, allowing you a safe distance to protect yourself and your family from an attacker.

If a dose quarter defense is warranted, TASEP® devices double as contact stun devices to repel someone as a powerful and unexpected backup capability.

Cartridges for TASER® devices have a unique serial numbers and are equipped with an Anti-Felon Identification system, which discharges 20-30 serialized paper tags when deployed. Law enforcement can later retrieve this confetti from the scene and contact TASER® International to get the name of the owner of the device, allowing police to track any potential misuse. Lifetime Replacement Guarantee included with each device.

The TASER® C2 GOLD KIT™ has everything a user needs to carry and practice using the TASER® C2™ device. Utilizing the same technology as their proven law enforcement models, the C2™ has incredible take down power. Dimensions of TASEP® C2™ device: 5-1/2" x 2-1/10" x 1-1/4" 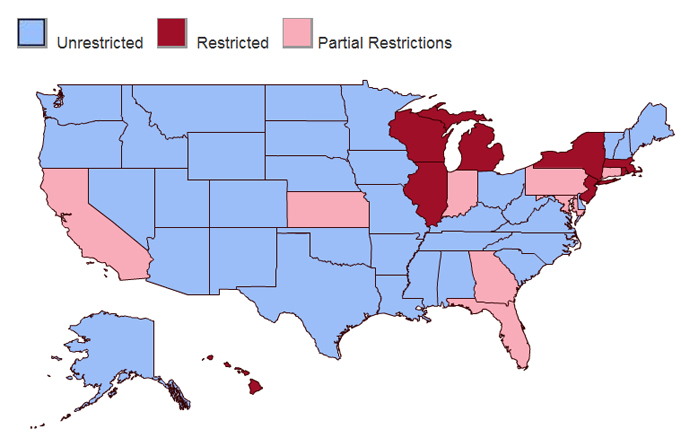 Absolutely no sales to minors under 18 years of age or any person who falls in one of the following categories: convicted of a crime punishable by imprisonment for any terms; fugitive from Justice (requires interstate flight to avoid prosecution or testimony in a criminal case); drug users or addicts (may be shown by recent conviction for use, recent possession of drugs, or recent arrest for use of drugs, or positive drug tests); aliens illegally or unlawfully within the US or those lawfully admitted in non-immigrant status (i.e. aliens without permanent residence status); mental defectives or persons committed to a mental institution; formally renounced US citizenship; dishonorably discharged from the military; subject to a court order prohibiting harassing, stalking, or threatening of an intimate partner or child of an intimate partner or placing such persons in reasonable fear of bodily injury; and convicted of a misdemeanor crime of domestic violence.

It is the responsibility of the buyer and not the seller (tactical-survivalist.com) to ascertain and obey all applicable federal, state and local laws in regard to the possession and use of all products on this site. By placing an order the buyer represents that he/she is of legal age, he/she does not fall in one of the above categories and that the products will be used in a legal manner. Tactical-Survivalist.com will not assume any liability for the use of these products and recommend the buyer become familiar with the laws in their city, state, province, that regulates the use and possession of these products. Consult your local and state authority before ordering if you are in doubt.