Every year, rangeflnders take a stride forward with features well beyond simply displaying a distance. SIG Sauer's KIL02400ABS Laser Rangefinder is one such innovative electro-optic rangefinder.

Pairing the rangefinder with a tablet or smartphone and SIG's Applied Ballistics application, information is keyed in to create a ballistic profile that can determine hold-over to compensate for bullet drop, hold-off to counteract wind direction and velocity in milliradians or minutes of angle (MOA) for a specific cartridge.

The SIG KIL02400ABS Laser Rangefinder can simply be used as a rangefinder by pushing its ranging button and reading the distance to a target This mode worked well in conjunction with a .22 rim fire rifle and a scope with a bullet-drop compensation elevation turret.

The KILO is a 7x25mm monocular that SIG states will range deer up to 1,400 yards, trees to 1,800 yards and reflective objects up to 2 miles. On a partly cloudy morning just after sunrise, I ranged objects in the open foothills with the KILO.

With a tree or large rock in the circular aiming reticle and pushing the ranging button, yardage for 550 to 1,300 yards instantly appeared in the display. Several times the KILO failed to register on objects when I did not hold it steady enough. 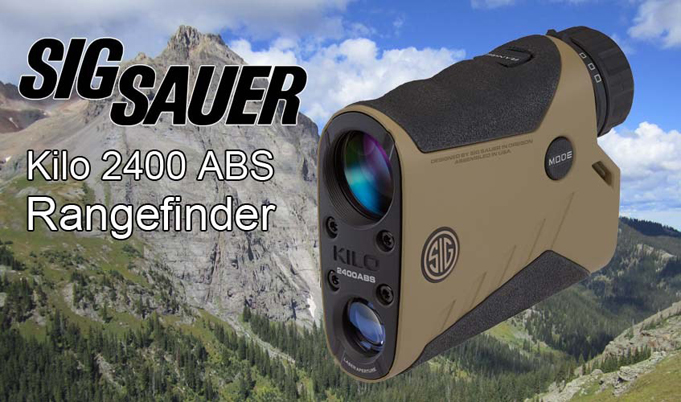 A steady hold, though, provided distances up to 1,500 yards. While I was sitting on a hill, a white-tailed deer stood up from tall brown grass in a creek bottom below. The rangefinder showed 714 yards to it.

The deer went into a stand of cottonwoods, and was tracked at 740 to 788 yards as it walked through the trees.

A snow squall blew in, and I doubted the rangefinder would work at all through the snow, but it provided readings out to 345 yards.

I headed down to the creek to start my spring gopher campaign, pairing the KILO with the discontinued Redfield Battlezone TAC.22 2-7x 34mm scope mounted on a Ruger 10/22.

Ballistic information can be downloaded to a KIL02400ABS rangefinder so it also displays compensation for distance and wind at a specific range.

The Battlezone elevation dial is a pop-up with resettable V4-MOA adjustment and a bullet drop compensation (BDC) dial calibrated for distance from 50 to 150 yards set for .22 Long Rifle cartridges shooting 36-grain hollowpoint bullets with a muzzle velocity of 1,260 fps.

Shooting showed bullet trajectory and the BDC dial meshed within a ground squirrel's eye out to 150 yards.

With a weight of only 7.5 ounces, holding the rangefinder steady enough to obtain an accurate reading on the little target of a gopher was difficult. Bracing my elbows inside my knees or leaning against a fence post helped. Pushing the SIG's ranging button instantly displayed a distance.

Holding down the button put the optic in Hyper-Scan mode that provided four distances every second; that helped compensate for a less than steady hold. Gophers standing up on their mounds looked like tent stakes, though the SIG provided exact readings on the skinny targets. 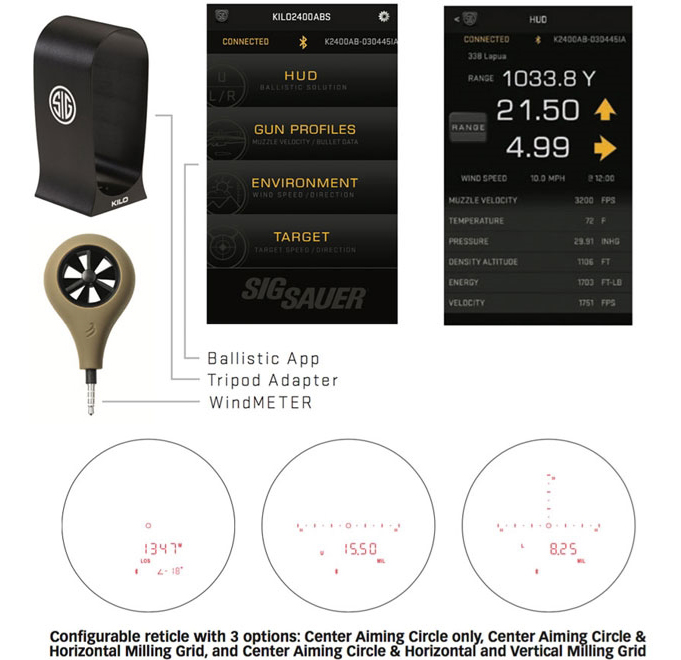 The KILO also provided exact readings to gophers in narrow openings in the sagebrush and when aiming it at gophers just over the top of sagebrush.

Using the rangefinder was slow compared to eyeballing the range - aiming so much high or dialing the scope to the estimated range and firing.

Often, a gopher had ducked into its burrow or disappeared into the grass before I could exchange the rangefinder for the rifle. The KILO showed its value when shooting at 75 yards and farther.

It delivers distances to a tenth of a yard, and I turned the elevation dial on the TAC.22 scope to match the readings.

The KIL02400ABS can be used by itself or synchronized with a smartphone or iPad to display its readings.

One after another, four gophers were shot at 125 yards. The longest first-shot hit was at 134.7 yards. That's about like hitting a deer at 700 yards.

An erratic wind came up, about enough to stir the peach fuzz in my ears. The scope's reticle has hash marks with 2-MOA spaces on its horizontal wires with the scope set on 7x. One hash mark provided the correct spacing to compensate for the wind at 100 yards.

The KILO's advanced setting can be arranged to provide exact wind adjustment and much more. Programming electronic devices is above my paygrade, but it was easy to download the SIG Ballistics application to my iPad and synchronize the iPad to the rangefinder with Bluetooth.

From the "Gun Profile" menu displayed on tKe iPad, I typed in information about my .223 Remington load, such as bullet diameter, ballistic coefficient and muzzle velocity and sent the profile to the KILO.

Once a load's ballistic profile is matched with the rangefinder, there is no need for the iPad or smartphone. Selecting the .223's profile in the KILO, I advanced through the menu to configure wind direction and velocity, holdover and wind compensation in MOA values.

Those settings can be adjusted on the application by overriding them with new numbers and pressing the "sync" button.

The rangefinder was now set to calculate wind and elevation holds. With the rangefinder aimed at a tree trunk, I pushed the ranging button; a distance of 561 yards immediately appeared.

The heads-up display (HUD) on the SIG application on my iPad is configured to display current range, holdover and environmental conditions from the paired KILO rangefinder.

With the KILO mounted on a tripod and aimed at a target, pushing the ranging button on the HUD remotely fires the rangefinder.

That removes human error. I mounted the rangefinder on a tripod and aimed it at a board fence on a far hill. Pushing the ranging button on the HUD displayed a distance of 915.7 yards after a few seconds. The rangefinder displayed 913.8 yards.

The SIG app also calculates and sets muzzle velocity and bullet drop from actual shooting at known distances by entering your actual shooting results in the "Custom Profile" in the "Gun Profiles" submenu.

The SIG rangefinder instantly displays distance with a push of a button. Minimizing complexity and maximizing functionality for fast target acquisition.

The "Environment" sub-menu shows the temperature, pressure and humidity data coming from the rangefinder's sensors. These figures can be updated and controlled by an iPad or smartphone.

A Weatherflow WINDmeter is included with the KILO. My iPad and many new smartphones have no jack to plug it into, but that's okay. Wind changes speed and direction from one second to the next along a bullet's path.

From watching instructors at rifle shooting schools, I noticed they do not solely rely on a wind meter to judge wind. Mostly they study vegetation and mirage movement, run the figures through the computer between their ears and pronounce an amazingly precise hold adjustment.

When a rangefinder is developed to see mirage and vegetation movement and apply and display a compensating hold-off, rangefinders will have taken their final steps forward.