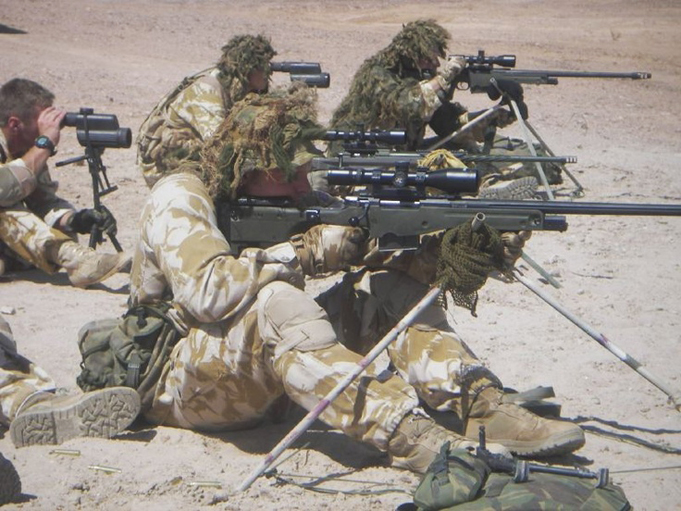 You don't particularly have to like your spotter/shooting partner, but it helps. Typically, there is a mutual respect between the two on a sniper team, and hopefully compatibility.

Each has a job, and each should easily be able to flip from spotter to shooter as duties rotate. The shooter/spotter relationship is built on trust and communication. The shooter needs to trust what his or her spotter says, and in turn, the spotter needs to provide the best possible information. Neither wants to let the other down. You share information constantly in a fast, terse manner since some targets may only show themselves briefly. One person can't do the job alone. It is a team effort, win or lose. Even in non-military situations like shooting with your pals at the range or hunting, the spotter/shooter team can be invaluable for success.

The hardest job is not pressing the trigger to take a shot, but spotting and calling the correct adjustments. If you see your impact as a shooter, you can make adjustments; a spotter's job is to watch for impacts, and that is easy with a dirt bank behind the target. Learning to spot a trace, or the bullet's vapor trail in the air as it heads toward the target, takes a bit of effort and good optics.

Calling wind takes experience, and the better spotters are really good at it. Brezny called wind change corrections quickly and precisely, One trick is to watch mirage drift, which can help both the shooter and spotter judge wind speeds at the target. 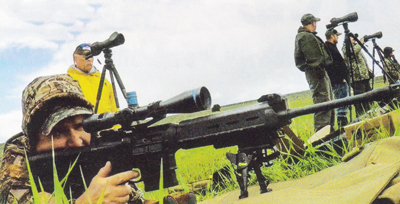 Push your rifle against its bipod and place your thumb alongside the receiver, not behind the grip, for a steady shot.

The spotter determines the change and feeds the shooter the correction. If the shot is high or low, using "push" and "pull" terms keeps terminology consistent with no room for interpretation. If the shot was low, say 3 mils, the spotters tells the shooter: "Pull 3 mils." The shooter then knows to "pull up" and dial the elevation turret counter-clockwise 3 mils or use the mil dots on the vertical strata of the reticle to correct the shot. "Push" means just the opposite, telling the shooter to dial clockwise to adjust aim. Part of the reason for the terminology is that it allows the shooter to adjust the elevation turret without taking their eye out of the scope and off the reticle. For a wind change direction, "push right" means to push right into the wind.

Hits and misses are all due to communication. Trust your partner's skills and it will soon become much easier to shoot out to long distances.

Briefly speaking, the shooter's responsibilities include spotting a target, estimating target distance, adjusting the optic on the rifle for the shot and engaging the target. The spotter also detects targets and shares range estimation. Communication rapidly goes back and forth between the two, especially in windy situations when conditions can change quickly, and it is up to the spotter to estimate wind direction and speed and give the shooter the green light to engage the target or stop and adjust their aim given new information. After the shooter sends the bullet, the spotter observes the impact and calls it either a hit or miss, and if the target was missed, gives the shooter aiming corrections.

Compatibility with your partner is important, and at a recent NRA Outdoors Level 1 Long Range Hunting course, I was fortunate to click with my partner, LP. Brezny, the noted author and long-range varmint hunter. Both of us have spent similar trigger time after varmints—though he has shot his weight in bullets many times over—hunting woodchucks and ground squirrels essentially alone. We may have been with other hunters but never really partnered up with one.

At the NRA Outdoors course, we were partnered and put in a situation where we were firing a new platform at known and unknown distances. So, in a sense, the playing field was leveled. The course made it easy to understand the general theory of long-range shooting, but the hands-on shooting at known and unknown distances proved how valuable the partnership between a spotter and shooter truly is. 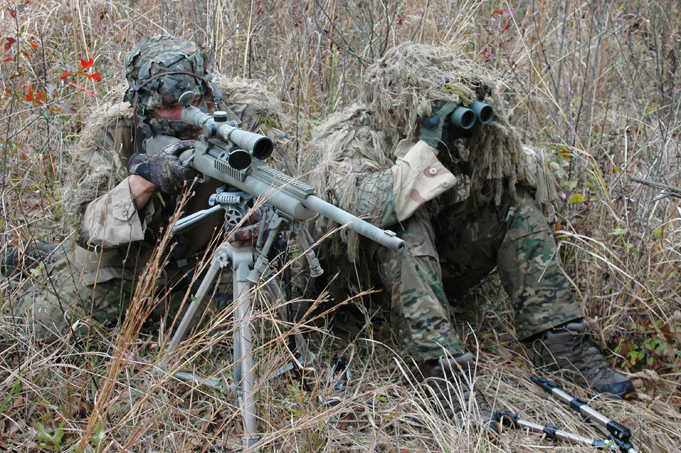 In the real world, there are no excuses for a poor shot. Assuming your gear - rifle, optic and ammo - is in order and you know your dope, the responsibility falls on the shooter to send a bullet downrange with precision. Here are three basics tips that can help turn you into a better shooter.

FROM INSTRUCTORS IN THE FIELD

Based on my LE experience and personal preferences, a couple changes were in order. The vast majority of police deployments require marksmen to stay in prone, often for hours. I like a stock with simple adjustments and no levers, so I installed the Magpul PRS on the rifle's receiver extension. I also added an ATI grip and a Blue Force Gear sling.

Officers generally look for something to rest their rifles on for enhanced accuracy. While the Samson Evolution handguard on the rifle is a high-quality piece of equipment, Seekins Precision's SP3R handguard features M-LOK slots and a flat bottom for use on all kinds of surfaces. Seekins makes an excellent adapter and barrel nut to install the SP3R to the Ruger so it fits flush and mates perfectly to the rifle's top rail.

Next, I needed a bipod, so I chose Elitelron's Revolution. It places the barrel inside a rotating ring that can turn 360 degrees. The bipod's steel legs hold the rifle securely, and the legs fold to multiple positions. The Revolution bipod mounts to a rail, in this case the top rail of the SP3R, eliminating any loose attachment issues.

It's important for LE marksmen to keep some kind of cleaning equipment with their rifles, not in their cars. Sain Defense's new Firearm Cleaning System comes with a .30-caliber cleaning rod that breaks down easily for quick, compact storage. The rod's solid T-handle is very sturdy and can be used as a wrench. It all fits in a customizable pouch that will last a lifetime. There's also a mat for cleaning along with a place for bore brushes, jags and other items.

When it comes to optics, Nightforce and Leupold are two of the biggest names in the industry According to Nightforce, the company's most popular model for law enforcement is its 5-25x56mm ATACR scope using a lighted, second-focal-plane MOAR reticle and 0.25-MOA adjustments. I had a mil version of the same size on hand (I prefer mil measurements for competitions), so I used it to test the Ruger Precision Rifle.

Leupold stated that its most popular law enforcement optic is the 3-18x44mm Mark 6. Compact and lightweight, this is an incredibly versatile scope. I've used several over the years, and they've never let me down. Most buyers choose the Mark 6 with Leupold's Tactical Milling Reticle (TMR) and M5B2 knobs.

Losing the ball and chain of department policy has allowed me to move forward, and years of testing has showed me that the 6.5 Creedmoor can do everything a .308 can do but with less recoil and smoother operation in an AR.

Even with barrels as short as 18 inches, the 6.5 Creedmoor holds its own at typical engagement distances and reaches out farther. It's an excellent option for competition, hunting or virtually anything requiring pinpoint accuracy. You can get factory-loaded match ammunition for about the same price as .308 ammunition, too.

This scope has ample magnification for the 6.5 Creedmoor. This glass is excellent; the knobs are large, easy to read and easy to set.

The final additions were an AXTS Raptor charging handle and an Atlas bipod with Tactical Supply talons that dig into dirt nicely and still work on stable structures. Now it was finally time to hit the range.