REGARDLESS OF THEIR PRICE, MOST SPORTING .22LRS SHOOT REMARKABLY SIMILAR GROUPS...

I’ve been a fan of .22 rimfire rifles ever since my father let me borrow his single-shot, bolt- action Savage when I was a schoolboy, way back in the middle of the previous century. I shot my first rabbit with it on a prarie outside Denver.

Later at college I competed in the school shooting championships with a BSA .22lr, a Martini-action target rifle with an aperture sight. The BSA would shoot one-hole groups at 25 yards using Eley match ammunition.

That was enough to get me hooked on rimfires – I’ve owned at least one .22lr hunting rifle ever since. These days I have two .22 semi-autos, a pump- action, a .22 Magnum semi- auto, and a .17 HMR bolt-action.

Not a big collection, but I don’t need dozens of rifles – you can only shoot one gun at a time and mine are not wall-hangers – they do get used. 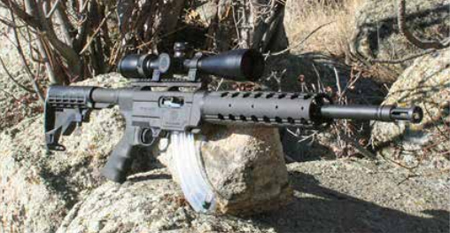 The tactical-style Ruger SR22 is a consistant .75” 50-yard shooter.

Recently, in contemplating my next move, I asked myself which of these hunting rifles had been the most accurate and functional, and which one I would buy now if I was back in the market.

radually it dawned on me that in practical terms, none of them had been the most accurate. As far as straight shooting goes their performances were almost all the same. Give or take, regardless of the scopes installed on them and the ammo I was using, they had all turned in 50-yard groups of between .6 and .75-inch, sometimes a bit tighter and sometimes a bit larger, but generally the differences in group sizes would be less than the diameter of a bullet.

I’m talking sporting-grade accuracy, the kind you measure by thumb or with a ruler, not the hundredths of an inch that target shooters measure with their micrometers. Out in the field it doesn’t really matter whether you hit the rabbit in the centre of its eye, or slightly towards the edge of its eye. 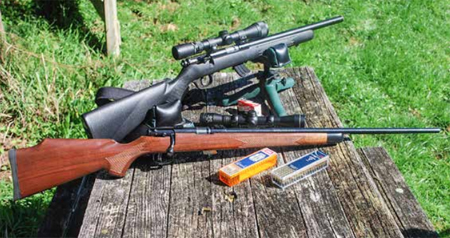 These two Savage bolt-action .22s turned in .75” groups at 50 yards with hunting ammo. Very few standard sporting rimfires will do much better than that.

Why was it that when it comes to accuracy, so few brands or models stood out from the bunch? Some of them were cheap, mass-produced rifles, some were almost custom made, and some European brands cost twice as much as the American-made guns. There should have been obvious differences in their levels of performance.

Was it the scopes they were fitted with? Then I recalled that I had tested that theory years earlier. I remembered that once I’d put a very powerful, high- quality scope onto a cheap .22 hunting rifle to see how much straighter it would shoot.

The answer was, not a lot. I could hardly tell the difference between groups shot using the $1200 vari-power and those shot with the budget-priced, fixed-4x scope retailing for around $120.

It took a while for the very obvious light to dawn on me. It’s this – .22 rimfire sporting rifles all shoot more or less the same because they’re all shooting the same kind of ammunition – that is, ammunition manufactured to the same standard.

“Today’s .22 hunting ammo typically delivers .75” (3/4-inch) accuracy at 50 yards, and it will do that in every rifle it is shot in, regardless of the rifle’s cost, brand, or country of origin.” 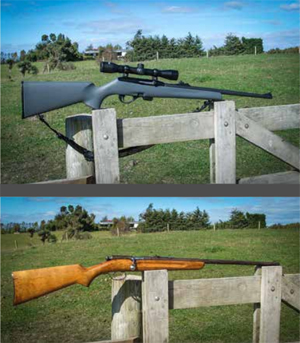 TOP : The Remington 597 is a budget-priced rifle, but its .75” groups are just as good as those shot by more expensive rigs.
ABOVE : A single-shot .22 from a bygone era, but this Springfield Model 82 is still a .75” shooter like the others.

Today’s .22 hunting ammo typically delivers .75” (3/4-inch) accuracy at 50 yards, and it will do that in every rifle it is shot in, regardless of the rifle’s cost, brand, or country of origin. Unlike centrefire ammunition that can be handloaded and tuned to suit your rifle, rimfire ammo all comes off the shelf. There’s no way you can improve it.

To qualify what I’ve written above, the scope on your rimfire rifle can make a slight difference, but only if you’re comparing high-grade optics with a very cheap unit. Even then, unless the cheap scope is actually faulty in some way the differences in accuracy will be minor.

The experiment above not withstanding, the majority of scopes I’ve put on my .22s have all been similar, particularly in regards to parallax. The scopes were mostly either 4x fixed- power or 3-9x40 centrefire models, not parallax-adjustable, and not rimfire-specific. This means they were factory set to be parallax-free at 100 yards, not at the 50 or maybe 75 yards I was typically shooting them at.

The combination of factors – shooting bulk sporting grade ammunition, and using scopes with their parallax settings not optimised for the distances I was shooting at, resulted in accuracy always being similar in any of the .22 rimfire rifles I was testing. Once again I am talking average accuracy. 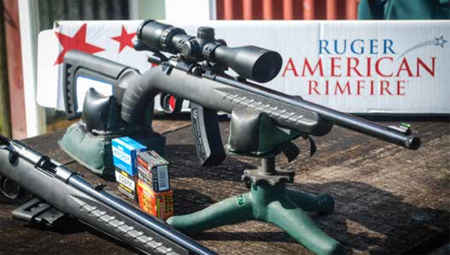 The Ruger was one of the exceptions – it shot groups of .6” at 50 yards (see target photo).

Generally speaking though, what I’ve said above holds true. Over the years the level of accuracy delivered by sporting .22lr rifles shooting hunting ammo is markedly similar.

Off a bench the Norinco shoots accurately enough to consistently knock rows of empty 12 gauge shotshells off a log at fifty yards, in other words, about .75” (3/4”). Later at a gunshow I came across an original Browning in exceptional, new, out of the box order. I bought it on the spot. Now I had the real thing, made in Belgium by gunsmiths with genuine old-world expertise. 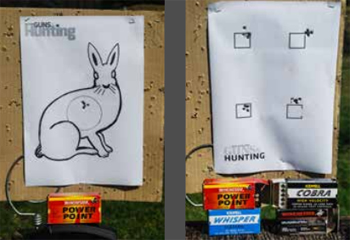 ABOVE LEFT : Accuracy with .22lr hunting rifles and ammunition doesn’t get much better than these 50-yard groups shot with the Ruger American Rimfire.
ABOVE : If your .22 shoots groups like this it’s a keeper...!

To my surprise though, it didn’t shoot any better than the Chinese copy! This disappointed me at the time, but looking back, of course both rifles shot the same – I was shooting them using the same ammo out of the same packet.

I’m not saying that experimenting to find the right brand or type of ammunition for your particular .22 rifle is a waste of time – it is not. Some ammunition will shoot better than others in a given gun, and some will shoot much worse.

What I’m saying is that there are limitations to the improvements you can expect. By carefully selecting your ammunition you might get your 50-yard groups to shrink from the average of .75” to around .6” or maybe close to .5” if you’re lucky, but that’s about it. And like I said, the difference between .5” and .75” is only a fraction more than a .22 bullet’s diameter.

“Generally speaking though, what I’ve said above holds true. Over the years the level of accuracy delivered by sporting .22lr rifles shooting hunting ammo is markedly similar.” 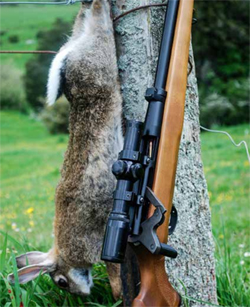 Like so many others, this straight-pull Izhmash Sobol shot .75” 50-yard groups.

I saw now that the quest I had been about to embark on – the search for the most accurate .22 sporting rifle – wasn’t likely to get me anywhere. Instead, I told myself this: Pick a rifle you like the look and feel of, a rifle you will enjoy carrying, and provided it shoots the standard .75” at 50 yards with the bulk of the ammo you have on hand, forget about its accuracy.

There’s nothing wrong with the rifle. Spending twice as much on another rifle and putting a top-dollar scope on it won’t make any significant difference.

I’m not knocking shooters who choose expensive, high- quality rifles and optics. Top grade gear is certainly a pleasure to own. I’m just saying that because of the limitations of the ammunition, in terms of field-grade accuracy expensive rimfire rifle and optics are unlikely to shoot measurably better than run of the mill rigs.

When I fitted the high-quality scope to my .22lr, as mentioned above, I was tempted to try for longer and longer shots because I could see the targets so much better. Nice try, but it didn’t work – all I got was a very clear image of things I couldn’t hit!