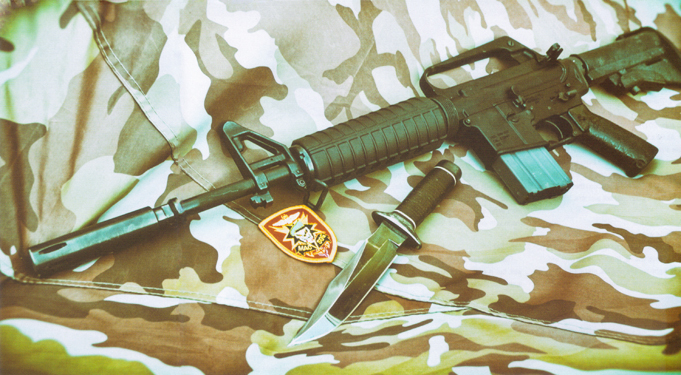 They don't make ARs like they used to, and that's both good and bad. The modern AR 15 offers improved rifling, piston operating systems, more calibers, better materials, integrated scope rails, and thanks to innovations like KeyMod arid M-LOK, 99 percent of the accessories are plug 'n' play.

Today's rifles are a breed apart from what initially sprang from Eugene Stoner's mind over 60 years ago. Still, the author cut his teeth on an M16A2 as a 17-year-old Marine, and sometimes we kind of miss carry handles or find ourselves lusting after one of the short XM177s that a generation of operators before us carried, as they slogged through the rice paddies and jungles of Southeast Asia.

We wanted to roll a retro carbine build and went on a nostalgic hunt for an AR receiver with a fixed carry handle, and there were virtually none to be found. Every assembled rifle for sale at the local gun shop/gun show circuit seemed to be a railed, 16-inch barreled wonder with Magpul furniture. Not that there's anything wrong with those, but we wanted to go retro!

The few we did find were older Colts that have value as collector items in their own right, and we didn't want to "Bubba" a fine factory piece for our own amusement. As a builder, I found myself challenged by the authentic M16 kits that were abundant just a few years ago, but are now drying up. The few parts that you can find seem to be more spurious than anything else.

We turned to Brownells, which makes it safe and easy to source a retro build — you pretty much get one-stop-shopping with the added benefit of trusting the source.

Black Cerakoted receivers with Spartan helmets, Gadsden flags, or pirate ships may be cool on a personal AR, but are completely wrong for a retro build of any type. Likewise, integrated trigger guards, checkering on the front of the magazine well, and other forms of customization have no place on a retro build.

Brownells is producing their receivers as close to period correct as you can get without jumping into a time machine and snagging some hippie's draft card before he burns it to take his place at INDOC.

Pouring over the Brownells M16A1 Upper Receiver, we found that it matches the original A1 profile. That means there's no shell deflector for southpaw shooters, the A1 rear sight housing and carry handle have identical contours to the "ARs of old," and obviously there are no M4-type feed ramps.

The BRN 16A1 Lower Receiver has a front takedown lug profile and profile surrounding the receiver extension that are identical to those found on the M16A1, versus the more commonly found "A2" profiles, making them correct for any M16A1 reproduction build.

Nodak Spud (the manufacturing leader in retro receivers of all types) provides the 7075-T6 aluminum forgings on both upper and lower receivers, and then Brownells has it machined to Mil-spec dimensions. After machining, each receiver is coated in a matte-black, hard anodized finish.

Our suggestion is to not cheap out on the build with another lower or upper that may not match up with either of these for a retro build.

One of the unique looks of the XM177 comes from the "grenade ring moderator." This muzzle device was intended to reduce the loudness of a short-barreled rifle by making it sound like a full-length M16. Because of the change in sound signature, ATF classified these moderators as silencers requiring the $200 transfer tax.

There are lookalikes without the grenade ring, allowing mounting of the XM148 launcher, the precursor to the M203 grenade launcher. We wanted authenticity above all else, though, and Brownells makes a repro XM177 flash hider complete with grenade ring with a total length of 4.5 inches.

When looking for a barrel, we wanted to go short. Unfortunately that proves to be a problem with a retro build as most of the improvements to function come at the expense of authenticity. We definitely wanted the aforementioned moderator, but went with a Brownells AR-15 12.7-inch barrel as opposed to the sexier 10-inch version. An added benefit was the ability to pin and weld the moderator, saving us the $200 tax stamp for an SBR.

This barrel came with the "Skinny Minnie" profile and the old-school l:12-inch twist rate. While it's not our favorite configuration for heavier match bullets, it's fine for the standard 55-grain projectile — and it's the one you want for historical accuracy.

The handguards on XM177s are round and short. These are very unlike the fat M4 - style handguards with dual heat shields that became popular in the 1990s. We like the version that Brownells is currently offering.

For the pistol grip, you need the no-finger-groove original A1 type. These can actually be relatively easy to find, but Brownells is working on a classy reproduction that fully looks the part. The version we used is a prototype, but it should be very similar to what they roll out in early 2017.

As for a buttstock, a true XM177 would never use a plastic CAR stock! The original stocks for these rifles were made from aluminum coated with black rubber, which can be hard to find. We found a plastic reproduction that got the job done, but it's currently not available.

While your plastic mags, drum-style magazines, and other favorite AR-15/M16 magazines will fit, the only ones that will look right are the original metal Gl types.

Experimental 30-round magazines were in use in the early years of the XM177, but the standard capacity 20-round mags work just fine.

We have a small stash that were made in the 1960s that stilt see use to this day, but you can pick up new 20-round magazines from Brownells that look authentic and are made with an improved follower and spring.

The matte-black, hard anodized finish works well, but is a little too black to be entirely authentic. If you really want the ultimate in authenticity, you rattle-can it with Brownells Aluma-Hyde II (Parkerizing Gray 083-002-212) to give it a true "old-school" look that matches the original finish.

An imaginative builder could also send the carbine out for a Cerakote paintjob. No Boba Fett or Iron Man themes, but a nice old-school tiger stripe camo pattern would do this type of build justice — and give it the protection of modern chemicals.

You might say, "Add a sling and a flashlight and you could run any modern tactical course with this rifle." While you'd be right, the main problem with that statement is that the retro style does not lend itself well to adding lights or optics.

We found a Midwest Industries rail that attaches easily to the front sight blade and works well for mounting a flashlight. Purists will shout, "Heresy! Thou shalt not mount any tactical accessories to thy retro build!"

We aren't advocating it as such. We merely put it out there should you want to run a low-light carbine or other tactical course with your build. Although unlikely, if this is the only AR that you own and want to use it for personal defense, that mount beats using hose clamps and a mini Maglite. Just remove the rail section and light when you want to look like you're leading the raid on Son Tay.

For guys who want to run optics, if you want to keep it somewhat retro your only decent option might be an Armson OEG (Optically Enhanced Gunsight). You might have to do some digging to source one, but last time we checked Trijicon will still service these original tactical sights.

As for an optic for actual use, our favorite has always been the Trijicon ACOG with a crosshair tritium reticle. Most, if not all ACOGs, will mount in the carry handle. It may affect your cheek weld a bit, but our LEOs and warfighters used them long before all the cool kids switched over to flat tops. That's the uppers, not the haircuts.

If you don't care for the ACOG, another option is a Picatinny carry handle mount by Smith Enterprise (available from Brownells, 851-000-071 ) or a variety of others that mount to the carry handle and hover the sight over the top of the handguard. Personally we prefer the extended eye relief to an awkward cheek weld.

When you need to make your rifle look like it belonged to a LRRP (Long Range Reconnaissance Patrol) Team slogging it through Cambodia, you simply remove the mount from the mounting hole in the carry handle.

Our own stance is that if you learn to correctly use your irons, it will make you a better over-all shooter, but some shooters prefer optics.

IT'S PRETTY, BUT CAN IT SHOOT?

Nailing the look on any historical build is one thing. Putting it through its paces on the range to measure its accuracy and reliability is another. Brownells was kind enough to send us 200 rounds of PMC M193-type ammunition, and we enjoyed shooting it so much we dipped into our own ammo hoard when we ran out.

Was it the most accurate AR we ever fired? Probably not, but it was definitely one of the most enjoyable. The lightweight and handy design made us not want to put it down. Our groups ran from 2.75 at 100 yards and 4.2 inches at 200. This was while shooting in a standing position with no sling, rest, scope, or bipod.

If you're a builder and want to put something together to resemble a Vietnam-era build without the hassles and heartbreaks of crawling gun shows and scouring online ads for questionable parts while you listen to Credence or the Stones on your iPod, then Brownells has you covered. We started out with the intent of putting together an XM177, and once that building bug bites, we found ourselves thinking of the next project.

The good news is Brownells is committed to the "retro" market, with a line of about 10 retro/military-style barrels already out, and the company is looking to develop more period-correct furniture in the future. They're committed to seeking out additional parts for other retro builds as well.

So if building an old-school AR really trips your trigger, it looks like there will be plenty more to come in the future from Brownells. We think the world would be a better place with some M16A1 rifle clones, with a l:12-inch twist on a 20-inch A1 barrel, but we're silly like that.