New Cooking Gear For Your Pack 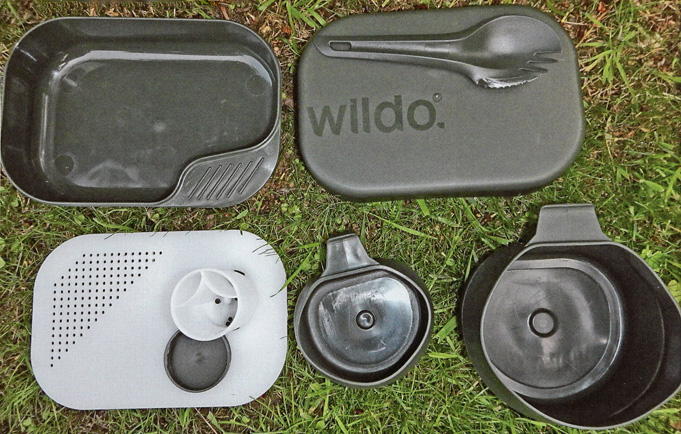 We all establish our own ways of sorting out our lives when camped out. Some like to prep full meals.

For others, like me, it is a case of heat water, pour into freeze dried food such as Bla Band (also supplied through New Heights) or add a boil-in-the-bag, and job done.

Whatever your way is, you will need certain 'tools' to do this. WildO from Sweden (and we can take it that this now has credibility as the Scandewegians spend a lot of time in the great outdoors) produce a range of light and robust camping utensils.

With the CAMP-A-BOX they are offered in one compact set, but all are supplied individually as well if preferred.

Here you have two folding cups, two bowls, a chopping board that doubles as a strainer, a multi-function eating device, and a salt/pepper/spice pot.

The whole lot packs down to the size of a small mess tin. It is plastic, so quieter, and is robust as well as lightweight. Neat. 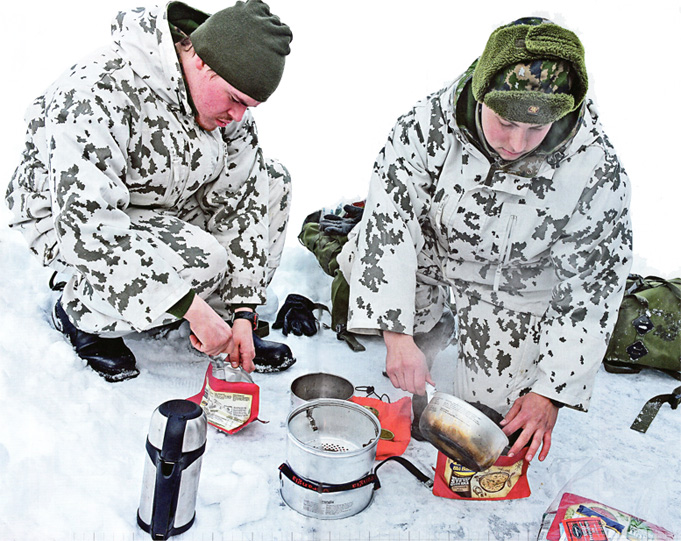 The military rations we are looking at this month are not only one of the lightest 24-hour packs we have tried out in this long-running occasional series, tipping the scales at just 1.026kg, but they also provide more energy than most equivalents, giving 4,156kcal if every edible item is consumed.

The reason for this light weight is that the main meals are freeze-dried, which makes sense as just a quick look at the map shows that Finns are seldom far from a freshwater lake in summer and in winter much of this Subarctic climate nation is covered by quite easily thawed snow.

The Finnish word Taistelumuonapakkaus may look a little exotic to English speakers, but a straight translation just works out as Field Ration and as for the contents, they are actually no more exotic than those found in a UK Forces operational ration pack; I know, as I have scoffed them all (though I had to strictly ration myself with those chocolate bars on account of my diabetes).

Okay, the Boiled Rice With Raspberries pouch for breakfast in the pack Carl proffed for me on Ex. SWIFT RESPONSE '16 was a bit unusual but, in my opinion, I would rather have this than the dried muesli with milk pouches found in many NATO ration packs these days - and this would definitely be a tasty and comforting starter for the day if soldiering in near Arctic conditions.

The three main course pouches are all produced by Bla Brand, the Finnish commercial outdoor meals specialist that Mike Gormley, our Gear Tester and Adventurer, raves about.

I have tasted the occasional freeze-dried meal example from this manufacturer before and the simple fact that I scoffed these three over two consecutive days straight after photographing the pack contents should tell you something.

Each resealable pouch tips the scales at around 150 grams, which is about a third of the weight of a conventional retort pouch and, when 300 to 400cc (or dl if you prefer) of boiling water is added, mixed and allowed to stand for ten minutes, a nourishing meal providing 650kcal of energy is the result.

The bread component is six thick slices of crispbread - probably to be expected as Finland is a Scandinavian nation - and a tasty 125g tube of ham paste is provided to spread on this.

The one thing which slightly surprised me about the Finnish ration pack is the lowish number of drink options.

There is the expected 2x coffee and 2x tea sachets, plus 4x creamer (though only 2x sugar), but the only other powdered drinks are a single sport energy sachet and a single hot chocolate sachet; however, as this ration pack is not geared for arid theater operations, that most likely the explanation.