HOW ONE BALLISTIC PROTECTION COMPANY IS TRANSFORMING THE LAW ENFORCEMENT WORLD

Lieutenant Brian Murphy wasn't even supposed to be working that Sunday morning. He had traded days with a sergeant who wanted to attend his son's graduation ceremony, and he was looking forward to a quiet shift.

He received a call around 10:20 a.m. about a disturbance at the local Sikh place of worship. As he approached the scene, he learned that shots had been fired.

He turned off his lights and sirens as he rolled into the complex, then he saw the first sign of trouble—two bodies lying one on top of the other.

Murphy grabbed his weapon, stepped out of his car and approached the two males. Both were deceased, and as he called for an ambulance, he saw movement out of the corner of his eye.

"His first shot hit me in the chin and went straight down my throat and into my neck. The bullet tore through my voice box and larynx before lodging itself in my trapezius. It's still stuck there, and it'll be there forever," said Lt. Murphy.

Lt. Murphy was the first responding officer to the 2012 Sikh temple massacre in Oak Creek, Wisconsin. He was ultimately shot 15 times during the altercation with the assailant. Thankfully, his body armor absorbed three of the rounds due to its high-tech innovations and craftsmanship.

Over the last year, the term "American made" has taken on new meaning as a resurgence in American craftsmanship and engineering retakes the industrial landscape.

No place is this more apparent than in the Midwest, where factories, including those in the high-tech arena, are starting up and rebuilding a strong economy. One of these realms is the modern ballistics industry.

In the heart of the automotive world lies one of the world's largest armor companies, working to reshape the armor world. This is appropriate since the first ballistic fabric, Kevlar, was originally created to make a better tire.

Taking it a step further, Armor Express applies a "quad compliant" protocol so that its gear is tested and certified to meet NIJ, DEA and FBI protocols as well as special threats.

Armor Express' mission is "to save lives by providing superior-quality body armor with unparalleled protection, comfort, wearability and service." From head to toe, Armor Express can do that by equipping an operator with ballistic-resistant products that can keep them safe and help first responders save lives.

Armor has come a long way. It used to be a ballistic vest was a ballistic vest. When you purchased it, you got a carrier, vest panels and maybe some strike plates as a package. Thankfully, with some innovation and advancements, armor has become more "a la carte."

To that end, Armor Express has a new line of helmets that are not only certified in the U.S. to NIJ Level IIIA requirements but also to VPAM, the gold standard of ballistic testing within Germany, Austria and Switzerland. These advanced helmets add an element of innovative protection to law enforcement officers in close-quarter situations.

The AMP-1 TP is the lightest and first composite (non-metal) helmet to achieve multiple ballistic certifications through independent testing in Europe and the U.S.

The helmet is also made of fully composite material. The AMH-2 training helmet is a non-ballistic solution weighing less than 2 pounds. This helmet offers impact protection, ventilation and comfort.

Its shell is certified to EN 397 standards for impact attenuation, and combined with the Comfort Protection Pad (CPP) suspension system, the helmet protects against multiple impacts and shock. According to Armor Express, "The AMH-2 is designed with the user in mind, providing first-rate modular protection, ventilation and comfort for prolonged periods of use." 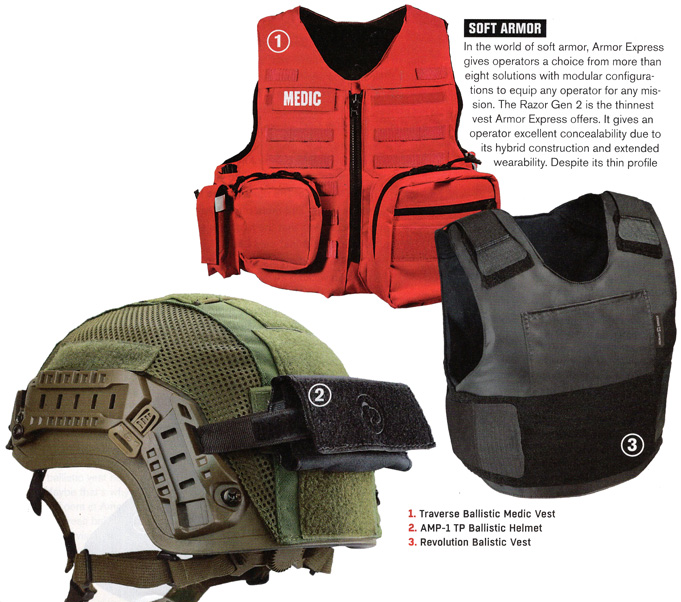 In the world of soft armor, Armor Express gives operators a choice from more than eight solutions with modular configurations to equip any operator for any mission. The Razor Gen 2 is the thinnest vest Armor Express offers.

It gives an operator excellent concealability due to its hybrid construction and extended wearability. Despite its thin profile (this NIJ Level IMA vest is 0.21 inches de thick and weighs in at a light 0.93 pounds per square foot), the armor is capable of stopping some of the most advanced rounds available today.

The Seraph is "for officers who want it all: thinness, low weight and excellent flexibility." The Level IIIA model is only 0.275 inches thick and weighs 1.12 pounds per square foot.

This vest's unique blend of Twaron and Dyneema is capable of stopping some of the most advanced ammunition, including the 5.7x28mm sporting round (Level II and IIIA) and lead-free 5.7x28mm (Level IIIA). 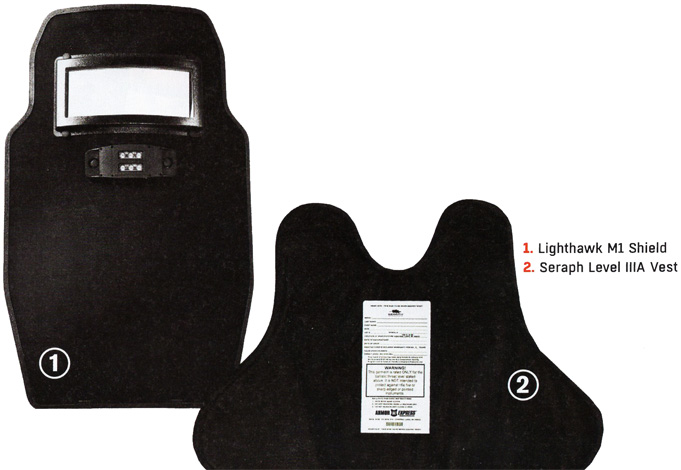 To protect the rest of the body, Armor Express has developed the Lighthawk series of ballistic shields to meet most operator needs. The new Lighthawk M1 uses hybrid ballistic technology along with a new shape for greater coverage.

The rear of the shield is covered in hook-and-loop fasteners to place mirrors, entry tools and other needed equipment within arm's reach while still being able to remain behind the protection of the shield.

The Lighthawk R1 is rated with Level III ballistic protection. This shield was also constructed with hybrid ballistic technology and comes in two sizes. The 18-by-24-inch shield tips the scales at approximately 13.5 pounds, while the 20-by-30-inch shield weighs 18.2 pounds.

After the initial hit, Lt. Murphy ducked behind his police car to take cover from the additional rounds and to orient himself. During a lull, he popped out and looked in the direction where he expected to see the shooter, except the shooter had maneuvered behind him and opened fire again.

"The next shot took off half of my left thumb and knocked the gun out of my hand," Lt. Murphy said. "Then I got hit in the leg and arm before I took shelter underneath the car. At that point, everything started to feel a little bit heavy. The firing had stopped and I thought about getting cozy, getting comfortable."

As he lay there under the patrol car, the shooter continued firing at a helpless Murphy. "There was no anger, there was no excitement in his eyes. It was like he had already planned the whole thing out. I just kept .trying to move quickly and told myself that I'd grab him if he got close enough."

The last of the rounds to strike Murphy went through a layer of the ballistic-resistant material on his vest and into his skull and brain. "I have two rounds from the incident still physically in me. They're like souvenirs because they remind me of what happened," said Murphy.

But thankfully, they didn't. Murphy's will to survive and Armor Express' U.S.- made ballistic vest helped keep him alive. Maybe that's why one in every five police officers in America is wearing an Armor Express ballistic vest. For more information, visit armorexpress.com. ® 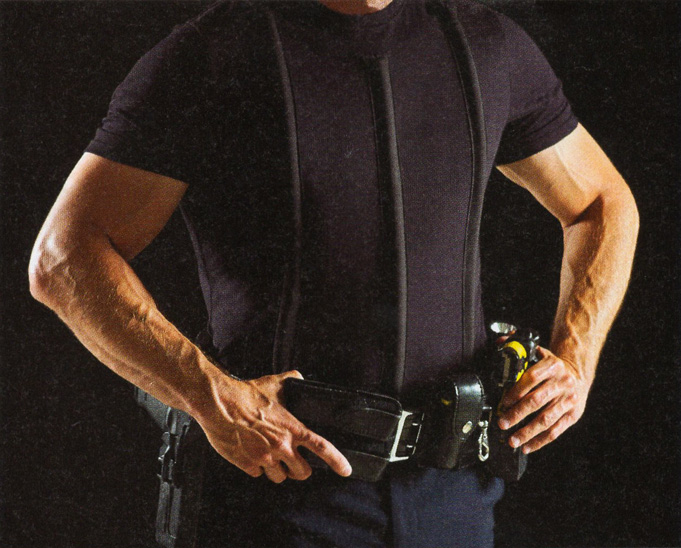 It's important to stay cool when it's hot, especially in a combat or tactical situation. Overheating is the quickest route to degraded performance. Body armor exacerbates this, and studies have shown that body heat can increase by close to 20 percent.

That's why United Tactical Gear researched and developed the CoolShield vented tactical shirt. Craig Tymofy, the inventor of the CoolShield, said, "In my other business, I fix police cars. When talking to the police officers who would come in sweaty on a 60-degree day, I asked them, 'Why?' Their answer was always because of the body armor. That's when I started working on the idea of CoolShield, a shirt that would help keep law enforcement officers cool."

CoolShield shirts are designed with vertically elongated ribs that hold the vest away from the torso. The ribs improve the likelihood that officers will wear their vests longer and more often. "During testing, the only complaint from officers was that the heat was escaping so much they felt it under their chins," said Craig.

The CoolShield's polycotton fabric allows for heat regulation while wicking away unwanted moisture and reducing body surface temperature by as much as 4 degrees. Unlike regular T-shirts, the CoolShield removes moisture and also reduces L chafing, clamminess and odor. The CoolShield also recently I received the National Tactical Officers Association seal of approval, (unitedtacticalgear.com) —Donald J. Mihalek