The name Meopta has been around for some time now, and we have previously been impressed with both spotting scopes and riflescopes from this European Czech Republic manufacturer.

We recently received a shipment of the new range of Meopta Meostar scopes, including the R1 series and the Meosmart. With the huge array of riflescopes now available on the American market, we were keen to see just how good these scopes were, and where they would fit into the all-important price/quality/value-for-money stakes.

Meopta claim to have combined old-world craftsmanship with state-of-the-art technology and materials. Aircraft-grade aluminium alloy is used for the Meostar R1 range and the one-piece body tubes are of 30mm diameter. The overall finish is achieved by bead-blasting the exterior surfaces, and then coating them with the 'Elox' anodising process.

This creates a tough, non-reflective matte-black surface. All Meopta scopes are nitrogen-purged, and sealed against intrusion by water.

Meopta's catalogue also claims that light transmission through lenses has been improved dramatically by using a proprietary IMB-5501 anti-reflective coating, which employs a unique ION application process. This results in a claimed light transmission of 99.8 per cent per glass surface.

In the Meostar R1 series, the reticule is placed in the rear focal plane, that is, in front of the eyepiece. This is important with variable-powered scopes, as it means that the reticule thickness will appear to remain the same size no matter what the magnification.

It should be mentioned that with all of the above features, these scopes are not in the inexpensive range of optical devices - if it's a cheap scope that you want, the Meostar is most probably not for you.

A first impression of the 1-4x22 was to think, 'What a great scope for a rimfire, or a large-calibre centrefire for shorter range work.' With power range of one to four magnifications, crystal-clear optics and an eye relief of 80mm, it would certainly fit the bill for those applications. It weighs in at 480g, and is 306.5mm in length. The field of view at 100m, through the power range, is 8.6 to 37m. A quick-focus ring with a rubber leading edge is located in the eye-piece, and rubber lens protection covers are standard issue.

This model featured the K-DOT, which looks like the letter T' with a small dot where the three lines come together.

The RD in the name means that this scope has an illuminated reticule. This changes the color of the reticule from the normal black to a bright red. The intensity of this can be adjusted with a power ring situated on the left-hand side of the adjustment turret. It has a cap that conceals a Panasonic CR 2354 3-volt battery, which can be of great assistance when operating in lowlight situations.

If it's a lower-powered high-quality scope that's required, then the Meopta Meostar R1 1-4x22 RD rifle scope is certainly worth a look at, but it's not cheap at around $1065.

This Meostar featured the Z-Plex reticule, which is more commonly known to us as the common duplex. The power range of three to 10 magnifications will cover most of the hunting requirements in this country for centrefire rifles.

This scope has a solid appearance, but it is in fact only 330.5mm in length and weighs in at 595g. The 50mm objective lens means that scope ring selection must be done carefully to ensure that the front lens clears the rifle barrel.

As with the previous scope, there is a quick-focus ring at the rear, and rubber lens protection caps are supplied. The click adjusters have a movement of 0.7mm at 100m, which is the common half MOA for imperial types.

We did some viewing with this scope in the last hour of daylight, and were impressed with the outstanding clarity of the Meopta lenses. Anyone who thinks that 50mm optical lens diameters are a gimmick really needs to have a look through one in failing light. Cost of the Meopta Meostar R1 3-10x50 rifle scope will be around $895. 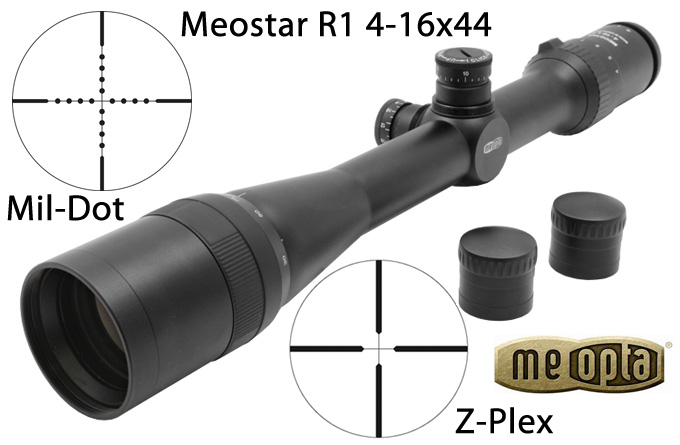 This scope differs from the previous two in a number of areas. Immediately obvious is the adjustable objective, for correcting parallax error. This is graduated from 10m to infinity. Parallax correction becomes more critical as magnification increases.

The click adjustment for this scope is 0.7mm at 100m or half MOA. Naturally, it is a bigger scope than the previous two, with an overall length of 386.5mm and an all up weight of 630g.

The scope we reviewed was fitted with the Z-PLEX reticule, but we understand that it is also available with a Mil-Dot, for those that prefer this style.

We took this scope out to a range on a warm Adelaide day, to see how the R1 handled the heat and mirage. Some field rifle targets at 200m were set up and viewed at increasing powers. It was a murky day mirage-wise and predictably, the image became more difficult as the power increased. At 16x, we could not make out the numbers on the target on the Meostar R1, but by reducing the scope power to 14x, things became a lot clearer. This is one huge advantage of a variable-power scope. Later in the day, when the range was in shadow, the Meopta Meostar R1 4-16x44 rifle scope came into its own and gave a very clear image at the highest magnification.

For anyone seeking a quality scope for longer range use, the Meopta Meostar R1 3-10x50 Rifle Scope model would fit the bill admirably. Expect to pay around $1175 for the 4-16x44.