Make Your Own Survival Sun Glasses

For the hunter, care of the eyes is probably more important than exercising the trigger finger. I had never thought much about the importance of eye protection to shield the eyes from brilliant reflections until I suffered my first bout of sun-blindness in snow country. Imagine both eyelids stuffed with sand grains that scratch and irritate with each movement the eye makes; you will have some idea of the effects of this crippling ailment.

Prevention is always better than cure and in this case, prevention is best accomplished by wearing sunglasses. Shooting glasses are not really a satisfactory substitute. A hunter needs glasses that block harmful solar radiation. Well-prepared shooters probably carry more than one pair of their favourite shooting glasses with them on a trip, but what about when the inexplicable happens and you are completely without sunglasses? Do you know how to make your own survival sunglasses?

A little improvisation can solve the problem. I remember reading that the Inuit people of the northern tundra carved specially shaped eye-shades from soft wood. These had narrow slits cut into them that effectively reduced the amount of light that could enter the eye. They also coated their eyelids and the interior surface of these 'sunglasses' with soot to reduce the reflected glare in their interior. It is unlikely that a survival situation during a hunting trip would provide enough time for the hunter to carve such items, even if one had the necessary skills and suitable sharp. knife. However, there are some reasonable alternatives.

Imagine a band of paper-bark stripped from a tree, a piece of material torn from a shirt-tail or a section of seat belt webbing about seven centimetres wide and 15 to 20 centimetres long. A hole punched at either end will accept a bootlace that fastens the shades around the head.

Ears can come in useful here to help support the project, especially if paper-bark is used. This material is rather fragile, but the holes for the headband can be reinforced with a pellet of gum from a wattle tree. Eye slits are best cut in the bark strip and in pieces of fabric by using a sharp pocket knife. It can be difficult to cut neat slits with the normal sheath knife that most hunters favour, but as we have discussed previously, it is recommended that you carry a secondary small and very sharp knife with you at all times.

To cut the synthetic material that seat belts are made from, a hot wire is best. Even a small flame will heat a wire sufficiently to enable holes to be punched in the ends, a notch to be cut out for the nose and two narrow slits burnt for the eyes. Don't use a hot knife blade to perform these tasks as the heat will destroy the temper in your knife and you never know when it will be needed for some other delicate cutting task.

Keep these suggestions in mind, but best of all, remember those sunnies!

You only get one set of eyes, fortunately in a modern society, health and safety is being recognised not as an option but rather a requirement. Recreational shooters, hunters and combat soldiers alike are now routinely wearing some form of eye protection guard from the effects of gas and brass particle blowback from incidents like split case necks of case head seperations.The additional benefit for field operatives are UV protection, amber enhanced filtering or simple tinting for glare reduction.

There are many shooting glasses available for the occasional and professional shooter which will give a good level of protection in the event of venting gasses, metal particles or other shrapnel. The recreational shooter will be well catered for with the basic single lens unitin yellow lens tint. Many shooters like yellow because on overcast days targets are sometimes hard to distinguish and warm color tinting like yellow or pink can kick up a contrast, allowing faster and more accurate target acquisition.

Deluxe shooting glasses can come with interchangable lenses such as clear, smoke, yellow and smoke grey (to cut down strong glare) and mirror finish. They can come with various frames including the addition of small, clear "stand-off" frames that fit inside the standard glassesto keep the lenses a short distance from the shooter's sweaty brow, thereby keeping lenses clearer for extended use. They would also act as an additional buffer in the event of a ruptured case - or worse! 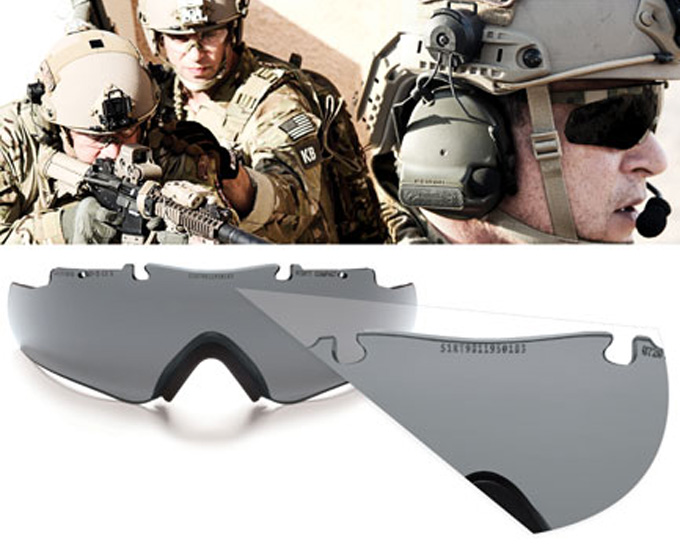 Smith Optics Inc. is based in Idaho, U.S.A. and were founders of the first ever goggle featuring a sealed thermal lens and breathable vent. This invention revolutionalised goggles for skiing and later with other developments by its founder Dr. Bob Smith, set a standard for high performance eye wear. Today, Smith Optics produces a large range of eyewear for Law Enforcement, sporting, motorcycling and general wear and distributed world wide.

One range that caught my eye was the Tactical Range available in several series including the Hudson, Prospect, Director, Hideout and others. Although all offer a winning style and functional designs, the Hudson offers an outdoorsy touch to them as they are now available in a camo pattern.

The Hudson Series feature a stylish, classic frame in the choice of several lens colours including grey, brown, igniter and even clear for the shotgunner/target shooter. Available with Polarized protection, the Hudson Tactical feature s tapered lens technology in proprietary high impact lenses that meet high standards for impact. While most of the frames in the Tactical range are black, the Hudson series offer hunters the option of AP and Max4 Camo frames with grey lenses as well, so camo wearers can now go all the way when out bush.

While the Hudson/Tactical is classed as a small fit pair of sunnies, their Prospect, Director, Hideout and Lockwood series are of medium size and fit, however, style and size/fit comes down to personal preference. Smith Optics are now available through gun shops world wide.