LEFT : The new XL100 Maglite sat alongside a .30-06 cartridge indicates how compact it is.

RIGHT : The XL100 is powered by three AAA batteries that give over 500 hours of walking light.

THE INTRODUCTION OF LED technology has made traditional hand- held flashlights with conventional bulbs obsolete; LED is superior not only in terms of high intensity performance and efficiency but greatly extended battery life.

Mag-Lite's new generation XL100 is a high performance utility torch which will prove ideal for general use around camp and in the bush. Serious hunters, particularly deer stalkers hunt right up until it s too dark to see game.

They carry a flashlight in their daypacks which they use to find their way back to camp. For several decades I've carried one or the other of the tiny Maglite torches, and they've ail seen a lot of use. On many occasions whilst overseas, my companions and I stumbled down off a mountain as late as 9 o'clock in the night. Needless to say, we all used Maglites to see where we were walking.

Early Maglites were old fashioned torches with no bells and whistles, unlike the latest Maglite XL100 which offers more worthwhile features than any outdoorsman could possibly desire. This advanced flashlight is driven by the next generation of MAG- LED technology and includes the "Advanced Flashlight User Interface."

The new Maglite has five modes plus "Lockout" which prevents accidental operation. This last feature is important since most hunters carry their flashlight in a pack along with a lot of loose items of gear which rub against it and could cause the Maglite to get switched on accidently. 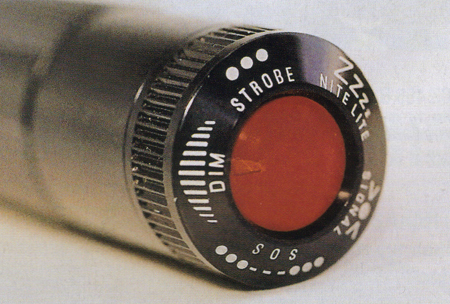 Various functions of the XL100 are controlled by a push switch which rotates from one to the other.

Getting caught out overnight in sub-zero temperatures because your flashlight had flat batteries is no picnic. But in any event, the wise hunter always carries a spare set of batteries in his pack.

A flashlight for outdoor use must be made tough to withstand hard use and some abuse such as being dropped on the ground. The \L100 is ruggedly built to be water and shock resistant with machined aluminium construction, anodized inside and out for improved corrosion resistance. It comes with three AAA batteries and a ten year limited warranty.

It is not unknown for a hunter to take a spill in rough terrain and injure himself, especially when travelling in the dark. In the event this did happen the new Mag-Lite allows him to send an SOS to his mates who may be ahead of him or somewhere within sight.

All of these modes can be instantly accessed through the rear tailcap switch which rotates left or right for variable power level and strobe rate settings - maximum to minimum. The LED beam can be focused to make a tighter spot by rotating the front lens.

The "Dim" setting is bright enough to light your path and the Strobe can be used to navigate, discover and avoid any obstructions on the track ahead. The highest Strobe setting projects the beam to a range of 134 metres, but reduces battery life to 5 hours 15 minutes. The dim setting extends battery life to 201 hours! That's a lot of walking in the dark.

If there's one thing the XL100 lacks, it's a nylon pouch, preferably one with a belt loo, to prevent damage inside packs and for handiness sake. Neverthess, the Mag-Lite XL100 sells for $99.95 which appears to me to be low-cost insurance, not only against getting lost but also for signalling your companions that you've suffered an injury.