How To Buy Binoculars

HOW TO BUY BINOCULARS 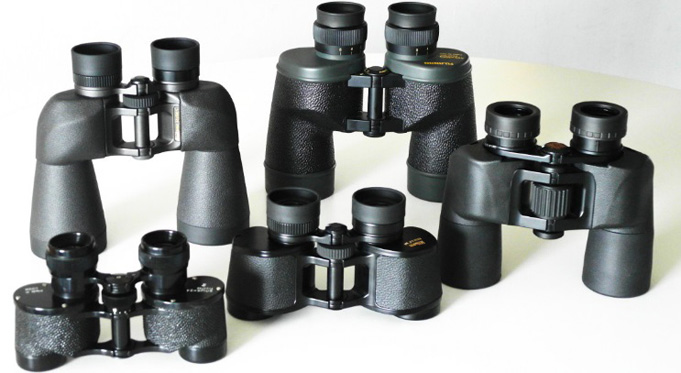 Buyers of binoculars are among the lost souls of the outdoors; if a shopper really delves into the subject he’s apt to be hopelessly submerged in optics and figures.

The optics of a pair of glasses are described by two figures, appearing as 7x35 for example. That figure would mean the magnification is seven times, and 35 rates the bright­ness.

That’s all you need to know. If the glasses were 7x50 the magnification would be the same but the image would be brighter, making the “fifties” better for dull light. In fact, 7x50 (popular with the U.S. Navy) is a good night glass.

The disadvantage of extra brilliance is in extra size and weight, unimportant to a boat­ man but decidedly a factor for a short-winded big game hunter.

I suspect that 7x35 is the most popular glass of all with hunters, although glasses up to 10-power can be held steadily enough if you’re careful.

Above that, they’re hard to use without a rest, and too much power is tough to handle in a bouncing small boat. Unless you’re planning on a lot of night use, I’d not worry too much about the brightness.

You get about what you pay for in workmanship, although some of the less expensive glasses, costing less than a C note, are quite adequate for long, hard use. Of late, some of the better glasses are being built in very compact form with new prism arrangements.

Seated position, with elbows on knees, will enable hunter to use his binoculars to the best advantage. The glasses are steadied by forefingers pressed against forehead.

Very cheap glasses that seem fine in a casual store window test can give you a splitting headache after a few hours’ steady use in big game hunting.

Eyeglass wearers should get binoculars with retractable eyecups so they can see the entire field or buy them especially made for eyeglass wearers.

Wide-angle glasses simply show a larger field of view, and consequently, are a bit more bulky. In hunting, I’ve never found that feature necessary although it really makes scenery look impressive. For nature study, of course, high-magnification glasses are a decided help and some veteran bird watchers carry whoppers.

Two-hand use with the forefingers pressed against your forehead makes for steady binoculars. Sitting down with your elbows on your knees makes it much better. I have caught myself subconsciously gripping my cap visor together with the glasses when I’d been using them for long hours.

There have been numerous gadgets built for holding glasses against your chest when they’re suspended by a neck strap, thus keeping them out of your way. They’re well worthwhile if you use a long strap.

I simply wear my glasses around my neck with a very short strap so I can barely get these up past my chin for use. I can wear them every day, all day, for weeks at a time without discomfort. They don’t bother me in that position—and I have been accused of sleeping in them!

In rain or snow, I lengthen the strap slightly so they can be put under my shirt or rain gear. Leather cases, fine for storage, are a nuisance in the field.

"You can't hit what you can’t see, and nowhere does that statement take on a more bold meaning than in the bearwoods. Among all big game species, black bears are notoriously nocturnal."

"A bear's round figure rapidly' becomes a distorted blob when the sun prepares to kiss the horizon good­ night. If a nervous bruin is circling your bait, unwilling to commit, the razor-sharp glass and internal laser rangefinder of a Swarovski EL Range binocular will allow you to identify' your trophy and its distance from your gun barrel instantaneously, from 33-1,500yards."

"When you’re stuck with a swift decision to shoot or not shoot in low light, now or never could be the difference between a trophy and tag soup."