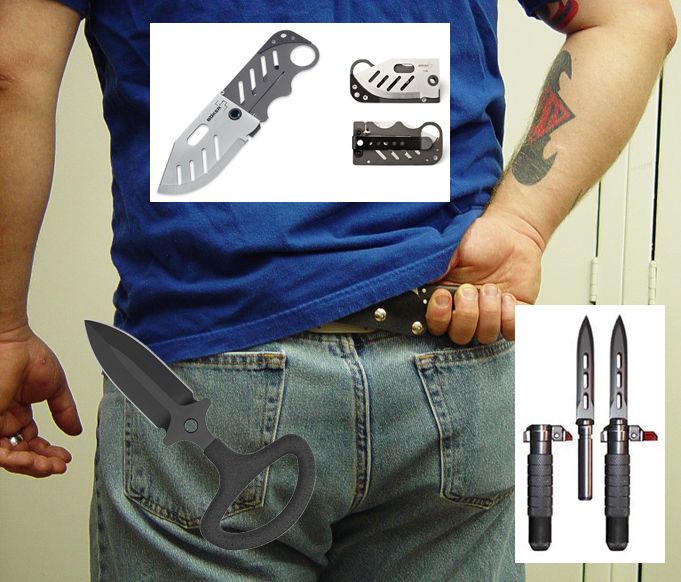 These concealed weapons can be used in a last chance fight for survival.

The undercover deputy finished Scotch-taping the boot knife upside down to his calf. There was no need for a sheath, he explained, since under normal conditions the point would not dig into the skin.

To draw it all he had to do was reach under his pants cuff and twist the handle so that the edge cut through the tape. A few hours later he was to need that knife when a drug buy went sour.

He didn't have time to reach the .25 automatic concealed in his crotch, and it was only the knife that kept him from being overpowered. He held his assailants at bay till his backup arrived to take them into custody.

Most police departments do not have a policy on knives. Generally speaking, knives are permitted since they are essential to a variety of utilitarian functions. SWAT teams carry them, usually pilot survival knives, in order to cut rope, wire, or other materials.

Patrolmen and detectives use knives to cut through screens, cut down suicides, collect paint samples and other evidence, etc. Used as weapons they would be appropriate in the same circumstances as firearms or other deadly weapons. Bo Randall is now producing a special undercover knife called the "Guardian."

It has a one-inch, double-edge 440C stainless blade. The last inch toward the guard is unsharpened and provided with thumb notches. The handle is mi-cart a with a flange at the butt to assist in drawing.

Instead of a quill on there is a small nickel silver guard, so the knife will not catch on clothing at the draw. Also, knives without quillons are more compact, easier to conceal. The sheat his designed to be worn around the neck or concealed in boot or sleeve.

The sheath has a clip for use in the boot or inside the waistband. The knife is retained in the sheath by a special tab of leather that is pushed aside by the thumb during the draw.

Pat Crawford makes a variety of tiny hideout knives. Two examples are his brass-handled push dagger and his Mode 112 toothpick. Both have 3-inch 440C blades and form-fit sheaths that can be clipped into a boot or pinned into a jacket lining.

Mike Franklin has just brought out three new boot knives, smaller than his past versions. All have three to four-inch blades made of 440C, 154CM, or Stellite 6K. His favorite handle material is Dall sheep horn, though he provides many other materials at customer choice. Handle mounts are brass.

Howard Viele has just put out a minimum-size boot knife called the "Wellington," with a 3-3/8-inch blade of 440C. The stag handle has stippled nickel silver bolsters. Perhaps his most interesting new knife is the "Demon's Claw."

This knife was adapted from an Asian "tiger claw" fighting knife shown in my book, Secrets of Modern Knife Fighting. This Viele knife has a curved 3%-inch blade sharpened on the inside edge. Integral with the 440C blade is a round blackwood handle, 1% inches in diameter.

Included is a unique snap - on belt sheath. Kuzan Oda has a couple new concealment knives based on the medieval Japanese tanto. As weapons buffs and martial artists know, the tanto was the last ditch defense weapon of the samurai class, both for the warrior and his wife.

If all defense failed they could still be used for seppuku (ritual suicide) so that honor would be pre - served in death if not in life. The warrior would use the knife to cut his abdomen while a wife would cut her carotid artery (after binding her legs to prevent an immodest display in death).

Oda makes a standard tanto boot knife with five-inch 154 - CM blade and micarta handle. His other knife is based on an armor - piercing tanto with reinforced point. This knife has a six-inch 154CM blade, with an ivory micart a handle and brass mounts.

He also makes a larger "Beavertail" dagger with a seven-inch blade, but this requires more effort to conceal. Bob Lum has a conventional clip point boot knife.

He also makes a "Utility Boot" with a "Gaucho knife" Mediterranean style blade with a 154CM blade and stainless bolster. The handle is stag, wood, or micarta.

Dan Stranahan has a guardless boot knife similar to the "nonfolding folder" made by Jess Horn. Like the other knives mentioned that have no quillons this one is fast on the draw, and since parrying another man's 50 combat illustrated blade is not really possible with a small knife a full quillon is not required.

All of the custom knives described make excellent hideout knives for the police officer or protection-minded citizen.

Obviously not everyone can afford such knives, or they want to put most of their money into their firearms, burglar alarm, guard dog, or other deefnsive devices.

For these people there are several new commercial boot knives available. The Gerber Mark I and the Ninja are probably well known to readers.

Two very interesting boot knives are now made by Bench Mark. These are the "Natchez" and the "Argonaut." The Natchez is a four-inch 440C single-edged knife with micarta handle and brass double guard.

The Argonaut is an underwater or bad weather version of the Natchez with sawteeth on the back of the blade, stainless mounts, and a water-proof sheath. Both are well designed factory knives that make use of the ideas developed by custom cutlers.

In choosing a concealment knife the purchaser should decide whether he will use it for utility or field sports as well as last ditch defense.

A utility or field boot knife should be single-edged with a substantial handle. The weapon-only knife can be of minimum size with stiletto blade and small handle.

Since a hideout knife will be carried close to the skin and perspiration, the blade should be stainless — 440C, 154CM, or nonferrous Stellite 6K. The mounts should be nickel silver or stainless steel. The handle should be all steel, aluminum, or micarta.

Most sheaths are made of leather and are meant to be carried on the belt or clipped in the boot. Some sheaths use velcro or stitching for attachment to the boot or inside the belt.

The famous belt buckle knife, such as that made by Bowen, fits into a flap behind the belt while the handle forms the buckle.

Some knives, like those made by Pat Crawford, are light enough to pin upside down in the jacket lining.

One man had a piece of velcro stitched under the arm of all his shirts so that when he dressed all he had to do was press the velcro-backed sheath against it, then put on his jacket. The knife was suspended like in a crossdraw shoulder holster.

Speaking of shoulder sheaths, I don't recommend them since with all the leather straps involved you might as well carry a gun.

Jerry Price makes a hideaway dagger called the "Last Friend." It is made of a single piece of 440C blued to cut down on reflection. The knife is curved to fit inside the waistband.

The special sheath is made of nylatron GS, Kydex, and polyethylene rather than traditional leather. It velcroes out of sight inside a heavy belt.

One of the best places to conceal a knife is horizontally at the back of the belt. This can be done with velcro or two loops can be stitched to the sheath so that it runs horizontally onto the belt. Dan Dennehy of Del Norte, Colorado, uses the latter arrangement on his triangular boot daggers.

A forearm sheath can be devised with leather or elastic straps. A more comfortable arrangement is to velcro the sheath to the inside of a jacket sleeve.

The "hook side" velcro is stitched to the back of the sheath, then pressed against a "woolly" piece of velcro sewn into the sleeve (in the case of a boot knife, this woolly velcro is epoxied into the boot).

Another good place is inside the right pocket of pants or jacket. The sheath should be pinned or velcroed inside so the knife can be drawn directly.

This is a good way to walk down mugger-lined streets, with your hand inside your pocket on the handle of a knife. This method also works with pistols, but these may weigh down the pocket creating an obvious bulge.

The object of a hideaway knife is self defense. It is a deadly weapon, although defensive cuts to an opponent's extremities are not likely to be lethal. It should be displayed or used only when the owner is willing to go all the way in defending his life and physical integrity.

The purpose of this article is the instruction of police officers and responsible citizens acting within the framework of local laws, and is certainly not meant for the edification of teenage criminals who are already carrying a variety of straight razors, scissors, daggers, and pruning hooks on our streets and in our schools.

One man in Texas wrote me describing an incident in which he used a Ninja four-inch, Lexan-handled boot knife to defend himself. He was with his girl in a park late at night. Suddenly a youth armed with a derringer confronted them demanding money.

Knowing that there was nothing to prevent the youth from committing rape and murder as well as robbery, the Texan waited till the gun was pointed away for a moment, then drew the Ninja from the back of his belt. He slashed the hoodlum's gun hand, which caused him to pull his arm back.

Without hesitation, knowing in another second the robber would be back on target, the Texan stabbed him till he fell. Then the man and his girl fled the park.