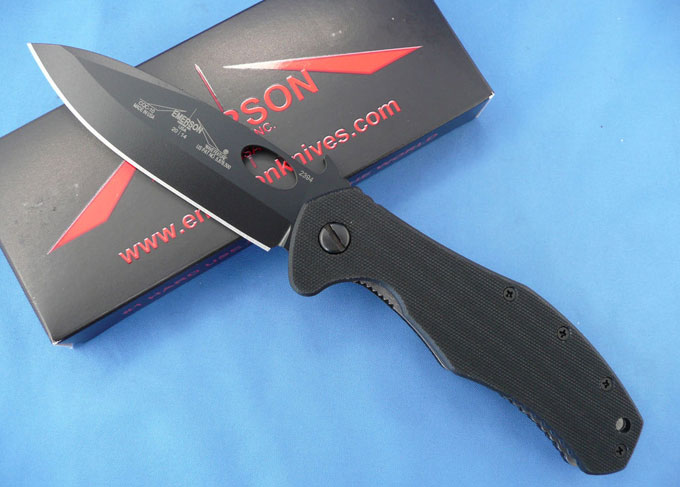 The CQC-10 knife features Emerson’s unique, patented Wave™ opening feature. The Wave allows the knife to be automatically opened as it’s drawn from the pocket by simply catching the Wave on the edge of the pocket. Note both HK and Emerson logos on the blade.

Heckler & Koch (HK) is one of the world’s premier manufacturers of police and military weapons. Emerson Knives is one of the world’s premiere makers of tactical knives. As with HK firearms, Emerson knives are held in very high esteem in the Spec Ops community, having proven themselves around the world in the field under very demanding conditions. The two companies have recently collaborated for the first time to introduce the newest knife in the Emerson CQC (Close Quarters Combat) series the HK CQC-10 or HK Emerson Bullnose Knife.

Designed by award-wining custom tactical knife maker and martial artist Ernest Emerson as a fighter/utility knife, the HK CQC-10 measures 4.9inches overall when closed and weighs 4.8 ounces. The knife is large enough to be of real utility, yet small enough and light enough for convenient pocket carry. The HK CQC-10 has a 3.7-inch blade of aunique, reinforced “bullnose” drop-point design. The 0.125-inch thick blade is partially serrated with Emerson’s Dragon’s Teeth ™ serrations.

It has a conventional V-grind. The utility and penetration characteristics of the blade make it well suited for the myriad of tasks that a tactical folder will be called upon to perform. Made of 154 CM stainless steel, the blade is hardened to RC 57-59. Made in the U.S. by Crucible Mate-rials Corporation, 154 CM is one of the better stainless blade steels. 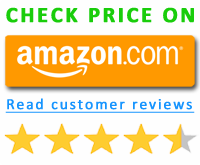 It’s comparable in performance to Hitachi’s ATS-34, holding an edge very well. Originally developed for use in jet engine fan blades, 154 CM is a high molybdenum modification of 440C that offers improved wear resistance (edge retention) and better corrosion resistance. Popular with custom knife makers, 154 CM has an extremely fine grain structure and is known for its toughness. It may be hardened to relatively high hardness levels without becoming brittle. It contains less chromium and isn’t quite as rust-resistant as 400-series stainless steels.

The blade is finished with black Teflon ®. Teflon provides optimal protection against rust and corrosion. It also decreases the coefficient of friction on moving parts for smoother operation and less wear. The exceptionally low coefficient of friction also allows the blade to slip through materials with less resistance, enhancing penetration and cutting capability. The Teflon finish is very durable but, like any finish, it can scratch if it’s subjected to abrasives. The blade on the HK CQC-10 has an oval blade opening hole and Emerson’s unique, patented Wave ™ opening feature.

The Wave allows the combat knife to be automatically opened as it’s drawn from the pocket by simply catching the Wave on the edge of the pocket. It’s no gimmick and could be a real lifesaver in an emergency. The Wave also works with Emerson’s Kydex Rapid Deployment Sheath. Available as an accessory directly from Emerson Knives, the Rapid Deployment Sheath provides a variety of mounting options. The blade of the HK CQC-10 pivots on a stainless steel pivot pin. The pivot pin is oversized for enhanced strength. The blade on the sample knife pivots very smoothly, with a crisp and secure lockup. The knife has a large heat-treated stop pin for additional strength. There isn’t any wobble (side-to-side play) in the blade when it’s closed or locked open.

The HK CQC-10 tactical knife has double liners that are made of aerospace-grade 6AL-4V titanium. Titanium is durable and doesn’t corrode. It has a better strength-to-weight ratio than steel. The HK CQC-10 has a spring-liner tang block (liner lock). Although I didn’t attempt to test the HK CQC-10 lock to the point of failure, it has proven to be quite sturdy. NASA chose an Emerson folder(SPECWAR A) to be the official issue knife to astronauts and the international Space Station Freedom after thorough testing at the NASA JSC White Sands Test Facility in New Mexico. The scales (handles) on the HK CQC-10 are constructed of black G-10 laminate and have a non-slip surface. G-10 is a high pressure epoxy resin and woven glass composite.

Originally developed for use in circuit boards, it has an incredible 55,000 psi tensile strength, making it nearly indestructible. Standard screws are used in all Emerson knives for ease of maintenance and field stripping. Emerson doesn’t use Torx-head screws in his knives since they require special drivers. The ergonomics and balance of the HK CQC-10 are excellent making it one of the best knives available. The handle provides a very secure grip and can be comfortably employed with either a forward or reverse grip. The knife has a deep finger cut-out/guard. Finger treads are machined into the bottom rear and top front liners. The rear of the blade’s spine has a grooved thumbramp for greater purchase of the thumb and better control when applying cutting pressure.

Other features include a partially open-backed, self-cleaning design that simplifies the task of removing any debris, and a lanyard hole. The HK CQC-10 combat knife is equipped with a removable, blackened stainless steel pocket/belt clip. The clip is mounted at the butt for tip-down carry. This carry position provides the easiest access and allows the blade to be opened more quickly. To sum it all up, the HK CQC-10 is a very impressive tactical folder knife. The knife is manufactured in the U.S.A. and comes with a limited life-time warranty on materials and workmanship. Each blade is individually serial numbered and bears both the HK and Emerson Knives logos. The HK CQC-10 is available exclusively through HK. Production of this semi-custom knife is limited and demand is certain to be high, so it’s likely to be in short supply - so Emerson have released their own version of the best tactical knife - the CQC-10 Knife.