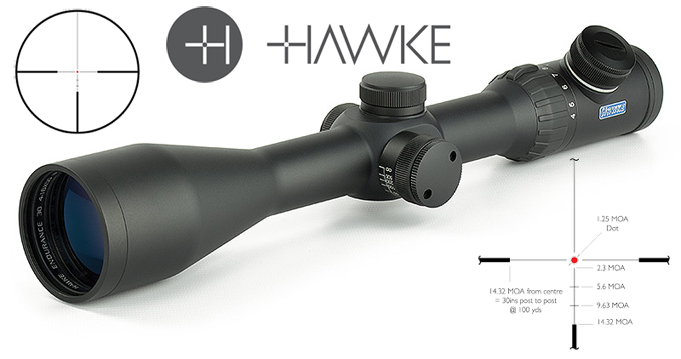 Yes, I know there are lots of good scopes out there and that I'm often described as hard to please, but that's a fair description of a man looking for equipment that meets his highest expectations.

The model on test is the Endurance SF 5-15 x 50 IR, which is a very versatile specification that should allow me to adjust it for any hunting scenario I might encounter.

The SF designation tells us that it features side-focus parallax adjustment, which leaves the ocular bell (the front of the scope's body) clean and tidy.

Often, side focus can add a lot of weight to a scope with the extra mechanism and lenses needed compared to an objective-mounted one, but this weighs just 626 grammes, which I consider modest for such a technically advanced model.

Windage and elevation adjustment drums are low, hunting types, rather than the more fashionable, tall 'sniper' turrets, which I don't like.

Once I have my zero perfected, I lock everything down and leave well alone. I make my corrections for range and the wind by eye, rather than 'dialling' for them.

The thing that I hoped would lif t this scope above the merely excellent was the LF dot illuminated reticle. This is a bold design that's easy to find in almost any light conditions.

Many of today's reticles are ideal for target shooting, such as hunter field target competitions, but are much too fine to be useful in the hunting field.

Many's the time that I've lost reticles that are as fine as a spider's web, against bare branches of a winter tree, or in the shadow of the summer woodland canopy.

The intense frustration of having my quarry in range, just in front of me and not being able to shoot has been burned painfully into my memory all too many times. 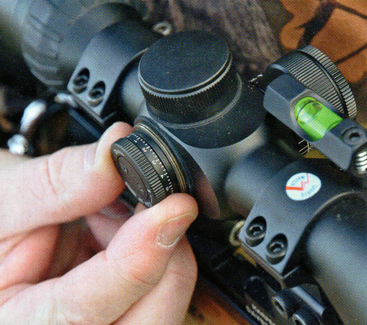 ABOVE: Despite the low dimensions, the adjusters are finger-friendly.

Hawke's LR Dot reticle has thick, bold arms at 3, 6 and 9 o'clock with finer elements coming together in the centre where a small dot creates the final aim point. It's only the dot that illuminates, which is just how I like it.

It creates a sharp, clear aiming point without overwhelming your low light vision and is just perfect. My most recent hunting trip emphasised to me in the boldest way how my scope choices pay off when it really counts.

On my number one permission they have two problems with the grey squirrel. Number one - they're trying to regenerate old woodland and the squirrels damage so many trees that their work at times feels futile.

Secondly, they have a pheasant shoot and the squirrels damage the grain feeders so badly that they believe almost 50% of the food they supply to the game birds never sees their beaks.

Estate enemy number one is the bushy-tailed rat, and their pest controller - me - had start earning his keep. No pressure then...

Pressure or not, the bare limbs of the winter trees excite my blood and I simply could not wait to get into the woods. Fully kitted out, camouflaged to the max' and armed with my number one rifle and scope combination, I was champing at the bit.

As luck would have it, my first day afield greeted me with some clear skies mixed with dark sullen clouds now and then. As I searched the upper limbs of the trees with my binoculars, I soon began to see fluffy tails and think about 'shooting solutions'.

Height, range and wind all need to be factored into any shot, and when those decisions have been made I need a clear, sharp image of my quarry and a reticle that allows me to apply the adjustments I've calculated. The LR Dot has a clear centre aim point, backed up with two hash marks on the vertical element to help with corrections for distance.

The Endurance SF delivered time and again in tricky, mixed lighting conditions. When looking at oblique angles to the sun I noted no flare on the objective lens and was able to see my quarry clearly every time.

I was simply able to view the squirrel, make my calculation, and press the trigger - oh, and watch the squirrel fall from the branch.

Earlier, I alluded to weight being an issue. Over four hours, I shot lots of squirrels, all taken from height as they scurried from branch to branch. As they hesitated, the chance of a shot was offered and when I did my bit, they began their journey to earth.

Despite the impressive spec' the Endurance SF is compact and light.

After using binoculars and the rifle for hours on end, every gramme counted. My arms, neck and shoulders were screaming for a rest, but when the squirrels are on the move we need to do what's right - right?

The Huntsman Regal XL with its Endurance SF delivered all the performance I needed to bag some 15 squirrels, two pigeons and a jackdaw. The shoot's vermin walk around day, that had 12 men with 12 bore shotguns, delivered two squirrels and a pigeon and looked pretty silly by comparison.

The quality, design, optical clarity and reticle type, mark this superb scope out as a benchmark in the world of high-quality hunting scopes of the modern era. It's a truly superb optic and is a worthy partner to the best airguns on the market today.