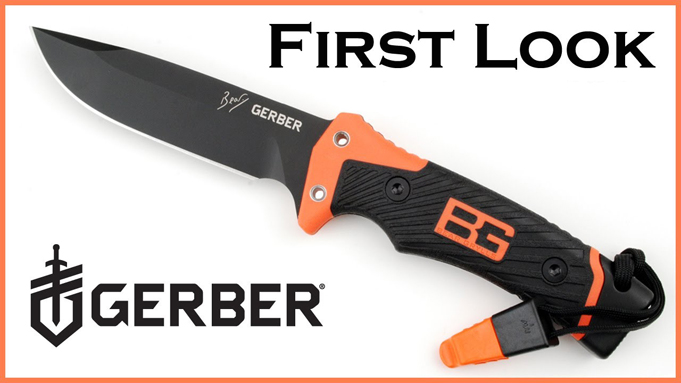 When Gerber's Ultimate Knife, designed in part by survivalist and TV personality Bear Grylls, hit the market in 2011, emblazoned with his initials in bright orange, many thought it would be less of a success and more of a gimmick. The knife then went on to sell nearly a million units.

Was it because of Bear's popularity? Hardly. At some point, even hardcore knife nuts had to admit it was a fine piece of gear—but it wasn't perfect.

In April, Gerber introduced the Bear Grylls Ultimate Pro Knife, an updated version of the Ultimate. It's not just a new color scheme—both the knife and sheath have been completely redesigned, according to Jared Schoening, manager of the survival and outdoor category at Gerber.

A choil has been added to the base of the blade. In tandem with a reshaped guard, it allows users to sharpen the entire edge and to choke up on the knife for finer work.

The old wraparound handle has been replaced with scales, proving to critics that it is, indeed, full tang, and the steel has been upgraded from 7Crl7MoV to the more robust 9Crl9MoV.

The sheath sports many improvements as well, including a pull-through carbide sharpener, a repositioning of the fire starter rod, and the addition of a drainage hole. Unlike its predecessor, the Pro is only available as a smooth blade.

Schoening says fans of the knife may see another updated version of the Pro in a couple of years. The Ultimate Knife will continue to be available at an SRP of $62. Ultimate Pro Knife SRP: $105.

As with all Bear Grylls equipment, they exhibit the quality and strength you'd expect an SAS soldier to be carrying. Each item is built with purpose and usability in mind assuring you the best possible product available at affordable pricing.

After leaving school, Grylls briefly considered joining the Indian Army and hiked in the Himalayan mountains of Sikkim and West Bengal. From 1994–1997, he served in the British Army with 21 SAS.

In 1996, Grylls suffered a freefall parachuting accident in Zambia when his parachute failed to inflate.