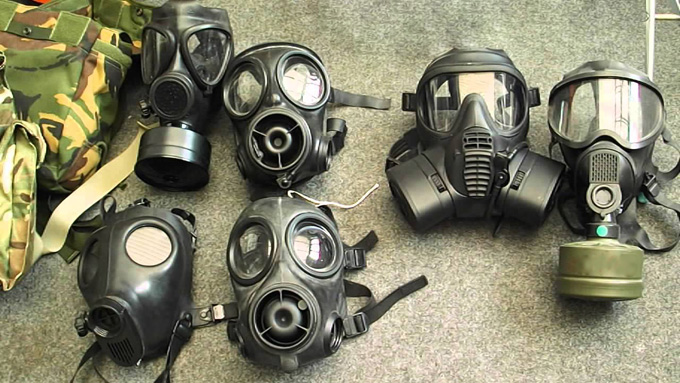 The gas mask was made famous during world war one, unfortunately for all the wrong reasons. While countries were trying to develop ways to best defeat their enemies they came across very efficient yet gruesome and inhumane use of poisonous gasses dispersed via different means, primarily; explosive devices. The gas mask became an essential piece of military equipment. Through it's development, the German gas mask and Israeli gas masks were the most advanced.

During world war two, there was a move away from the open use of poisonous gasses use in the field as it was seen as grossly inhuman and almost an underhanded way of fighting a war. In later wars there has been tactical use of specific gasses by some forces requiring the re-introduction of the gas mask as standard military equipment usually carried in a drop leg gas mask pouch.

Today the army surplus gas mask is seen as not only an essential piece of survival equipment now including the child gas mask for events such as an environmental disaster such as a chemical plant emergency or similar, but also for the ever increasing likelihood of a homeland terrorism attack. A situation where the gas mask is often overlooked.

We stock a huge range of approved gas masks to buy, gas mask filters, gas mask bags and don't forget the child gas mask, which is sized appropriately to avoid leakage on smaller people. Always carry spare gas mask filters and keep protected in an appropriate gas mask bag to avoid deterioration - our best selling being the " Israeli Youth Gas Mask Drop Leg Pouch...". CHECK OUT THE VIDEOS AT THE BOTTOM OF THIS PAGE.....

ALICE Shoulder Strap Made in USA from Fi...

You can rely on the modern gas mask to protect you from all current Nuclear, Biological and Chemical threats at home or abroad - (biochemical gas masks). We carry the Israeli gas mask, German gas mask, Russian gas mask, and one of the most popular selling, the Czech M10 though today's best gas mask, and the most effective would have to be the Israeli M15 gas mask along with its civilian equivalent version.

The best gas mask need not be the most expensive, only the most effective. You can even get a family gas mask kit at huge savings for a survival kit situation containing two childrens gas masks and two adults gas masks. Homeland terrorism has continued to create the need to protect ourselves at short notice from the defensive view of the military grade gas mask to our right to bare arms and actively protect ourselves. This is why it is so important to be prepared. It is not an extremist point of view, but rather a realist as these threats are not make believe. We have many different military gas masks for sale cheap!

Our gas mask catalog also contains a range of industrial HEPA mask filters and bio-hazard gas masks and military surplus gas mask bags. Included is the emergency services - fire brigade style smoke respirator masks that cover anything from the face only to the entire head with a protective hood. SWAT gas masks and special OP's gas masks are always in stock.

Below is a brief introduction to the army's new gas mask, the M50 gas mask - not currently available for sale to the public. It embodies simple technological advancements that make for more comfortable and reliable usage in a military gas mask.

An Overview Of The Military Grade M50 Gas Mask 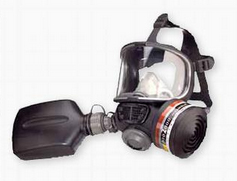 The elastomer compound of the face piece features excellent high temperature, chemical and ozone resistance as well as impermeability to gases, civilian and military. 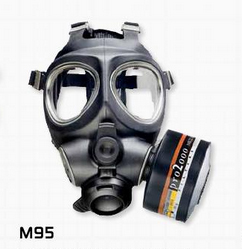 The M95 respirator is a well proven and widely used CBRN full face gas mask. Providing reliability, durability, long wearing comfort and usability, it is designed to meet the most critical hazards and stresses encountered in all combat situations.

This is the perfect gas mask for a bug-out pack or to keep stored in an underground shelter should there be conflict requiring hibernation for safety.

The standard 40mm thread makes them suitable for use across the entire Full Face Mask range. Selected types are approved for use on the Proflow and Autoflow PAPR systems, and those weighing 300g or less can be used on the Half Mask range. Standards: EN 14387 & EN 143. 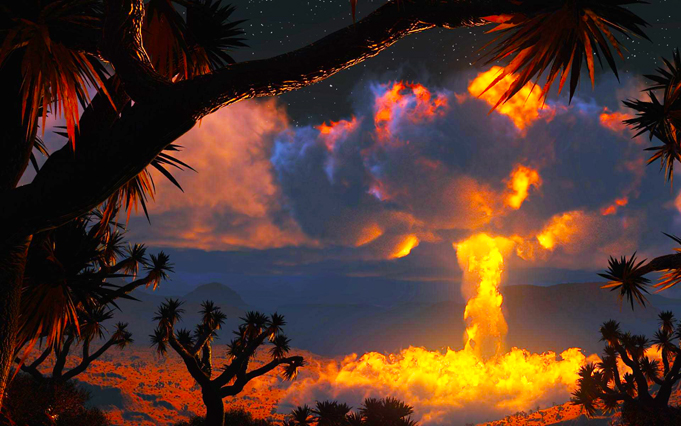 A nuclear device detonated in a populated area kills through its immediate blast effect, heat and fallout. If you are above ground and too close to the bomb when it detonates, there is just nothing to be done about it - if its not instant, it's just a matter of time. It just wasn't your day.

The subsequent heat released will create firestorms that, while undeniably horrible, are at least easy enough to understand. Fallout is the persistent component of these filthy fissile designs wherein tiny particles of radioactive material combine with atomized dirt and debris to saturate an area downwind of the initial blast site.

Getting this stuff on you or breathing it in contaminates your body with radioactive material that can cause burns and radiation sickness in the near term and a veritable cornucopia of cancers downstream. This is where you need to be sure your gas mask is NBC rated.

To guard against radioactive fallout, you just don't want to get any of it on or in you - primarily you need a gas mask. Impermeable outer clothing that can be sealed when worn and then safely discarded, combined with a quality protective mask, is about all that can be reasonably done.

Wash exposed skin with uncontaminated soap and water as soon as possible. Discard contaminated clothing and equipment in such a way as to minimize your contact with it. In a pinch, rain gear sealed with duct tape will do. Also pay particular attention to removing and cleaning your gas mask! 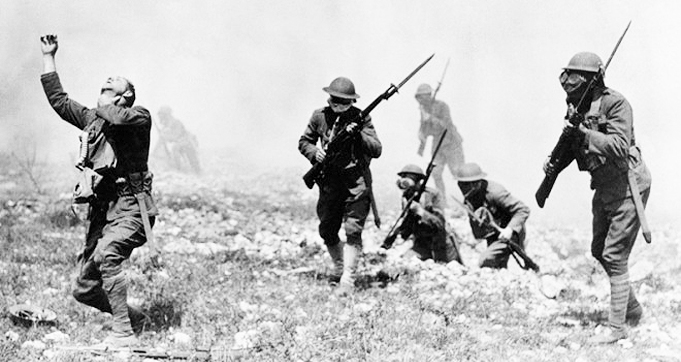 Chemical warfare agents are some of the most toxic compounds known to man. Tiny amounts of this wretched stuff on exposed skin or inhaled can quickly kill you. While there are plenty of variations, nerve, blood and blister agents are the most common types of chemical weapons. Use of these weapons saw the introduction of the military gas mask as standard issue to soldiers.

Nerve agents are a class of phosphorus-containing organic agents called organophosphates that work by interrupting the pathways by which the brain communicates with various organ systems. These sinister compounds were actually developed as part of insecticide research by the Germans in 1936, and a variation on this theme drives most modern insecticides.

There are two broad categories called "V" and "G" agents, and there are antidotes available. However, these antidotes are not commonly stockpiled for civilian use, and they carry substantial risks in their own right. Most are avoided by method of a simple gas mask.

Basic precautions against all chemical agents involve keeping it off of your skin and avoiding ingesting or inhaling it. Doing so requires impermeable clothing and a proper gas mask.

Blood agents are poisons pure and simple, and are typically based upon arsenic or cyanide. They are disseminated via aerosols. Protecting yourself involves using a good gas mask. You wouldn't want to get any of these blood borne agents on your exposed skin, either as they are absorbed quickly.

Some chemical agents are persistent enough that certain areas of Europe are unusable even today, a full century after their employment in World War I.

A mayonnaise jar full of VX nerve agent upended in the ventilation system of a subway, from atop a tall building in a city or at a packed sporting event would create havoc literally beyond measure.

WMD proliferation is a much larger problem now than it ever was during the Cold War and the probability of an attack grows by the day. As with most things, the wisest approach when faced with something truly horrible is to be educated and prepared. At the least, a small - portable gas mask should be considered as a daily necessity. 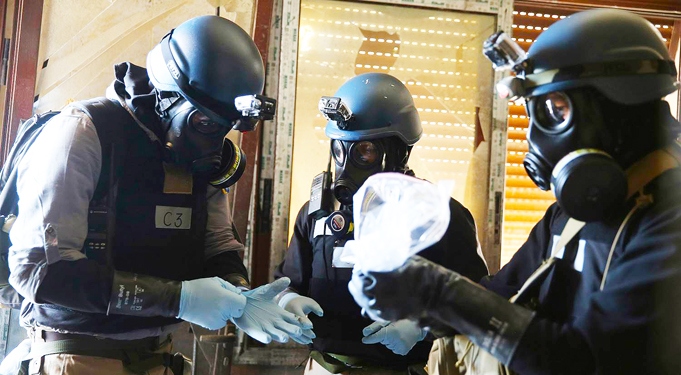 Both NATO and the Warsaw Pact were aware that while modern technology would allow a soldier (and his transport) to move and fight in even the most hellish of environment, their effectiveness in combat would be massively downgraded as men struggled to breath in cumbersome respirators and sweated in hot and restrictive protective suits.

Nearly all armored vehicles would be fitted with "overpressure" systems - raising the internal air pressure of the vehicle to one greater than that outside to prevent harmful fumes entering the vehicle - but even so, crew would be required to Wear their suit |if not their masks) in case they were forced to bail out.

In the late '80s land today) some of the vilest chemical weapons could kill within nine seconds of the smallest particle making contact with unprotected skin, or being breathed in. in situations such as this, no one was prepared to take chances and an NBC "threat level" would be decreed for the battle area.

This would govern whether the suit was needed and, if so, whether protective over-boots and gloves were also needed. Suffice to say, in most exercises most (armies spent considerable time preparing for the worst wearing their NBC kit for days at a time!

While NATO trained its individual soldiers to defend themselves with excellent NBC equipment (as part of a defensive doctrine the infantry would prepare to fight dismounted from slit trenches in their NBC suits), the Russians and their allied states had a wholly different approach!

The Soviet Union expected and planned for any future war to be fought almost entirely in a hazardous chemical environment.

They knew they could bombard NATO airfield and supply routes with lethal toxins and slow troops down by forcing them into their protective gear and fully expected NATO to reciprocate.

To this end the entire Soviet Doctrine was based around fighting a mobile battle from NBC-protected vehicles, from which the infantryman did not have to even leave his seat.