That is typically how much time the average knife buyer will look at a knife's design or its mechanism and decide whether or not to purchase that product. Understandably, they may not realize the story behind the design and mechanics that come with its production, but every new product development team has stories of "taking two steps forward and one step back."

Teams talk about concepts and engineering for hours and have bins filled with scrapped parts from design attempts that never even made production. However, with purpose, grit, inspiration, and a little luck, new designs featuring state-of-the-art technology and cutting-edge innovations are still made and brought to market, innovations such as Field Strip Technology from CRKT.

More than 10 years ago, Ken Onion, a world-renowned knlfemaker from Hawaii, was frustrated that he could not easily clean debris from his folding knife. Dirt, muck, mud, sand, dust, lint and even peanut butter caused the knife to not function properly and sanitarily boot.

Being a retired Marine, Ken thought about all the guns he easily disassembled without tools for cleaning and maintenance while in the military. He resolved to come up with a solution for this problem. That is how the concept of Field Strip Technology for knives was born.

Developing a knife to take apart without field tools is a formidable obstacle, so challenges arose with CRKT's innovative tech that needed to be addressed. First, the knife needed durability to hold up to constant daily use.

Second, there couldn't be any loose parts to lose when the knife wa s taken apart.

Last, the knife needed to be easy, simple and intuitive enough for anyone to disassemble and reassemble.

From this, specific questions arose in the engineering and development of Field Strip Technology:

Ken solved the first challenge by developing a hex-headed pivot tha t fit through the pivot hole in the blade and secured at the front handle. He also added an adjustment screw to the backside pivot, which eliminated excess play in the pivot area. 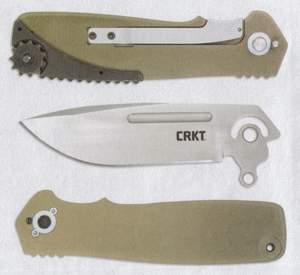 When developing the technology, CRKT a nd Onion wanted to make sure it was simple enough that anyone could field strip the knife and reassemble it without any tools.

The security of the tolerances for proper lock engagement is critical in the production of "strip locks." Securing the stop pin may sound easy, but it had to be perfectly perpendicular for the knife to properly fit. This wa s a challenge Ken and CRKT's product development and engineering team solved with fixtures to assure the stop pin was pressed in perfectly perpendicular every time.

Securing the washers was just a matter of tooling up a custom washer that pressed fit into the aluminum of the handles.

Holding the back end of the knife together presented a security challenge in that the handles had to be secure from separating and easily returned together tightly during reassembly. After researching and testing different variations and ideas, Ken and the CRKT product development and engineering team settled on a wheel lock.

Two key components were crucial in the decision to move forward with the wheel lock: It was easily manufactured and secured the knife handles from separating while bringing the handles tightly together. The wheel lock appealed aesthetically to Ken's design. It is important to CRKT that the custom knifemaker's vision, including aesthetic appeal, is properly executed in the production model coming to market.

The most obvious challenge Ken and the CRKT team encountered was the reassembly of the knife. Early iterations were easy to take apart, but the handle halves had to align perfectly for the knife to properly reassemble. 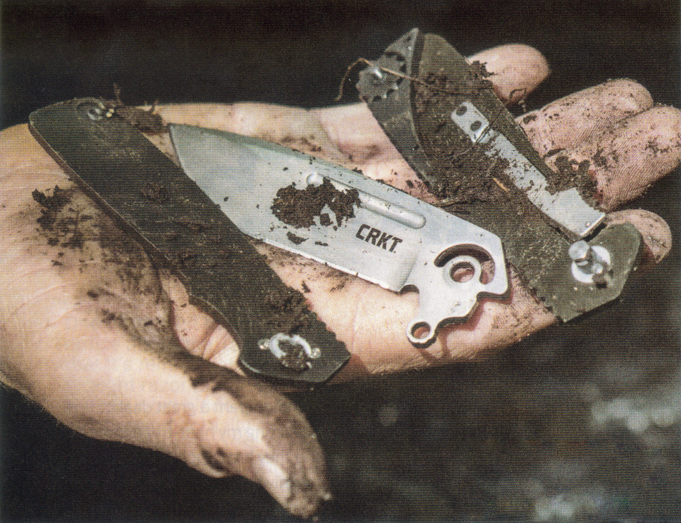 ABOVE :This technology resulted from Ken Onions frustration that he couicl not easily clean debris from his folding knife.

After extensive field-testing, brainstorming and research, Ken and the CRKT discovered that the hexagon pivot needed to float freely under the pivot, which misaligned the handles, making it easy to reassemble. The handles needed not be perfectly parallel for the pivot to seat into the top handle, but squeezed on both sides to lock the lever down. Once locked, the pivot stabilizes and the knife is ready for action .

CRKT In the Marketplace

It took years and great teamwork , but Field Strip Technology is now available to the masses-with new designs to arrive in 2017. With such positive reactions, it has been exciting to dawn a new horizon of innovation with the potential to create an entire new category.

When the knife is in closed position, press the release lever that is located by the upper pivot. Loosen the rear wheel until you hear a distinct click. The handles should release from each other. The knife releases in three sections for easy cleaning and maintenance.

The Homefront is now fully assembled and ready to take on any next task.