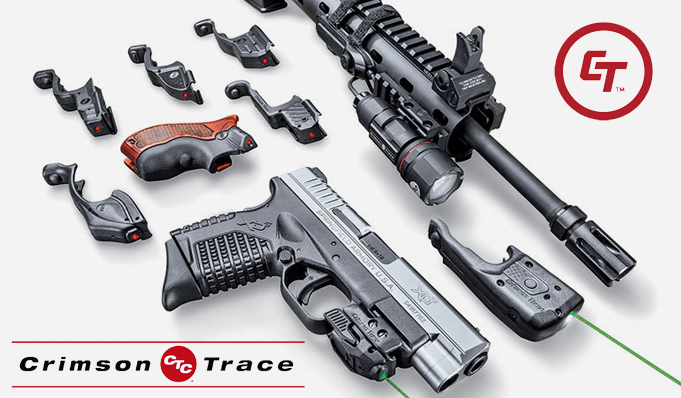 WHEN YOU THINK OF THE WORD “LASER,” it invokes word association with adjectives such as “precise,” “exact,” and “accurate.” This is what we expect when discussing aiming lasers mounted on firearms. When we use Crimson Trace laser sights, we expect that we’re enhancing our skills with these qualities.

A laser means that we can accurately aim in the worst lighting conditions without the need to be able to see our metallic sights. During a critical incident, one doesn’t have to shift visual focus from the threat to the front sight, and back and forth. Nor does one have to be able to keep the front sight centered in the rear notch.

Of course, a laser is much easier to detect, as well. Lasers are quicker to identify and faster to correct than traditional sights (even night sights), especially for those with aging eyes. For many, a Crimson Trace laser sight will out perform red dot sights because the laser-equivalent “red dot” (or green dot) is placed on the same focal plane as the target. 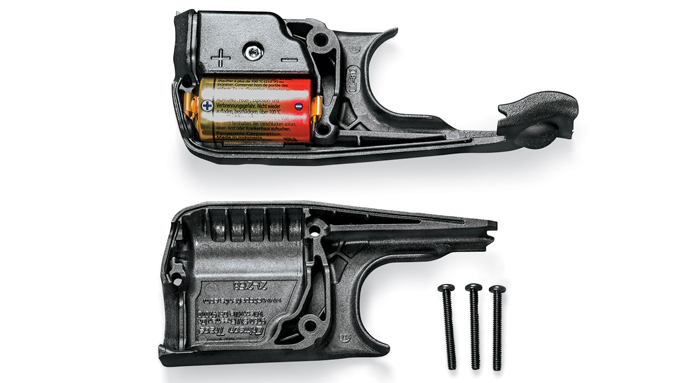 Additionally, a shoot­er’s eye doesn’t need to be properly positioned behind the sights or optics to see the laser or use it to shoot the firearm effectively. Unlike slide-mounted red dots, Crimson Trace’s laser sights can be ordered to fit almost any firearm without permanent modification, and they have a 24-year reputation of enduring a pistol’ harsh recoil, well beyond the life of slide-mounted red dots.

My point is, despite the growing popularity of attaching mini red dot sights atop the slides of pistols, the concept of placing an aiming dot on a target isn’t new, and there are many advantages to using a Crimson Trace laser sight. For example, cost.

Consider the price of a Trijicon RMR. One with an adjustable LED will cost $700. A dual-illuminated (fiber optic and battery) RMR retails for $577. A Leupold DeltaPoint Pro reflex sight is priced at $520. These prices don’t include any machine work that may be required to adapt a pistol to one of these if you don’t already own an optic-ready pistol. And once you have a red dot optic-equipped pistol, you have to consider what holsters fit it. Conversely, if you shop Crimson Trace’s Lasergrips, most will fit your existing carry rig. If you prefer a Crimson Trace Laserguard or universal Rail Master sight, you’ll find that most of the holster manufacturers offer a solution.

Though Crimson Trace’s name implies they specialize in red lasers, they began incorporating green lasers a few years ago and already have nearly 300 products in this category. Green lasers appear brighter to the eye, thus making them easier to see in high-­noon, daylight conditions, but the tradeoffs are that they consume batteries faster than red lasers and they cost a bit more. (Note that Crimson Trace offers customers free batteries for life.) This year, the company debuted a new line of high-­output, single- and dual-cell, firearm-­mounted white lights.

Laserguard Additions I recently installed a Laserguard Pro LL-­810G on my Glock 36 Gen3, which does not have an accessory rail. Installation was a cinch and took only a couple of minutes. The unit attached securely to my Glock by sandwiching each half over the triggerguard and tightened with three Phillips-head screws. It mounted solid and flowed seamlessly with the contours of the pistol as if it were engineered by Glock as original equipment. Windage and elevation adjustments were quick and easy using the supplied Allen wrench. The LL-­810G is also compatible with other Gen3 models including the G26, G27, G33 and G36, as well as Gen4 models G26, G27, G33 and Gen5 G26s.

The LL-­810G features a green laser emitter and a 150-­lumen, white LED light. The unit is powered by a single CR2 lithium battery and offers a runtime of 2 hours. It can be operated in the following user-­selectable modes: laser and light, laser only, light only and laser and light strobe. The standard 5mW green laser is pressure activated by Crimson Trace’s proprietary Instinctive Activation technology at the undercut of the rear of the triggerguard. 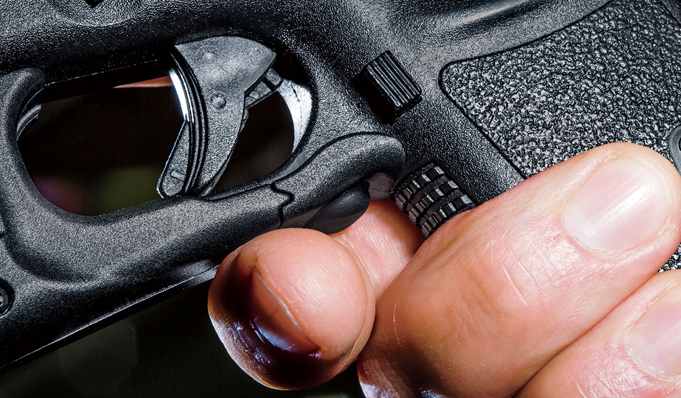 Instinctive Activation allows the user to activate the unit ­simply by obtaining a firm, natural, firing-hand grip. Pressure from your middle finger closes the circuit on a pressure switch that activates the laser, and you’ll notice that you have more control over the pistol because you’re applying more pressure to the grip. Relaxing your grip deactivates the unit. 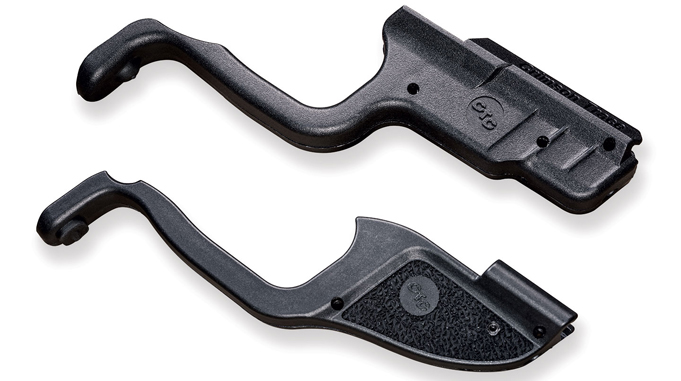 Being able to precisely control the duration of the laser or light is critical in a dynamic environment where a light that’s constantly ­on may compromise your position and draw fire if left on throughout a gunfight. There’s also a master on/off switch option to ensure the unit is not activated unwantedly.

With a suggested retail price of a dollar less than $380, the LL-­810G has been the perfect companion to my subcompact G36. Don’t carry a Glock? No problem. The following new Laserguard offerings feature red lasers with a price of $230:

Master Series Lasergrips If you assumed lasers were just for semiautomatics, you’d be mistaken. The new LG-­952 is a classy, rosewood-colored Lasergrip for the Kimber K6s revolver. This pressure-activated red-laser grip features Crimson Trace’s ShockStop rubber overmold construction that actually helps to dampen felt recoil, which is often an issue with magnum, snub-­nosed revolvers.

CMR-­206 Rail Master Universal Green Laser Sight Designed to fit a variety of handguns, rifles and shotguns with Picatinny or Weaver rails, the polymer CMR-­206 is a compact green laser that is activated by serrated, ambidextrous control pads. A single 1/3N lithium battery will power the unit for 2 hours in constant-­on mode, although the CMR-­206 can be used longer in momentary or strobe modes.

For this evaluation, I installed a CMR-­206 on SIG Sauer’s P226 Select easily. The unit attached with an insert that fit into the rail’s lug and clamped over the rail. Crimson Trace’s Secure Lock Technology (SLT) features two screws that lock the unit in place. Priced at $230, the CMR-­206 is a reasonably priced option that’s versatile for any firearm with a rail.

CWL-­100 Light for Long Guns Lights on black rifles are nothing new, but a quality, high-­output light with a price tag of only $60 is rare! Crimson Trace’s CWL-­100 features an anodized aluminum housing that mounts to a Picatinny rail. The new CWL-­101, features a hybrid mounting system that mounts directly to both KeyMod- and M-­Lok-equipped forends. Both models feature Cree XPL LED technology that produce 500 ­lumens of intense white light on high and 50 ­lumens on the low setting. There’s also a disorientating strobe mode. 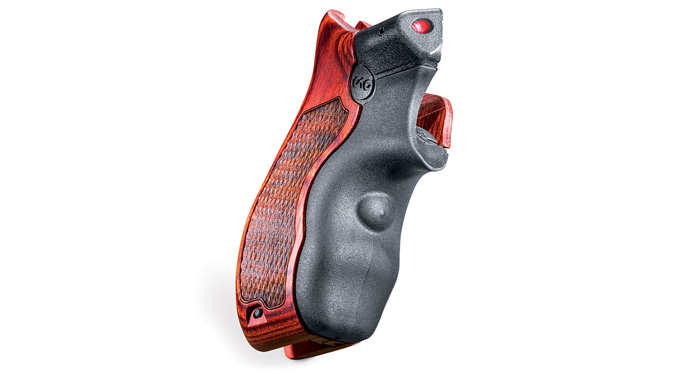 The unit is powered by a single CR123 lithium battery and has a run time of a little over an hour on high and just under 4 hours on low. If more output is needed, Crimson Trace offers a two-­cell unit that boasts 900 lumens on the high setting.

Two activation devices are included with the CWL series: a push-­button clicky rubberized tailcap and a remote pressure switch. The remote switch can be mounted in a variety of positions on a long-­gun’s forend thanks to the included hook-and-loop straps and cord that connects to the light. This setup is convenient and intuitive. It can be positioned and integrated around your support-­hand grip. By using your support hand’s thumb, press and hold the long pad for momentary on, or press and release an elevated button for constant on or off. 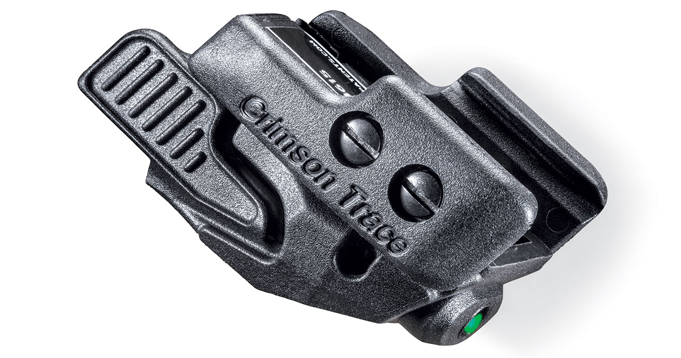 Coming Soon Scheduled to be released is the value priced CMR-­208-­S Rail Master. This is a two-mode — 110- and 420-­lumen — white LED light with compatiblity for most pistols, rifles and shotguns that have Picatinny or Weaver rails. It can be operated in the following modes: high beam, low beam, strobe and momentary.

Constructed of anodized aluminum, the CMR-­208-­S uses Cree XPL LED technology and runs on one CR123 battery. The runtime is a little over an hour on high and a little less than 2 hours on low. At $100, the CMR-­208-­S is certain to be popular for people that don’t want to spend several hundred on a light.

Consider adding a laser! To me, a laser-equipped defensive firearm makes a lot of sense. A laser makes it easier to aim, which translates to faster aiming and increased accuracy. You should still become proficient with traditional sights, but when life hangs in the balance, why not afford yourself the advantage?

Holster compatibility can be an issue, but Crimson Trace’s recent partnership with CrossBreed Holsters (crossbreedholsters.com) means that you’ll find quality holsters that accommodate several of Crimson Trace’s products. This one-­stop-­shop option is a convenience that will take the hesitation out of your purchase.

Whether you’re looking to equip a pistol, revolver, rifle or shotgun, Crimson Trace’s extensive product line likely has a laser sight and/or light to meet your needs. Since we never know when trouble will come our way, now is the time to add one of these potentially life-­saving accessories to your firearm.