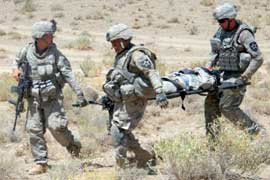 Sore or tired feet can cause you to stumble or become more susceptible to ankle injuries becoming a burden rather than an asset to your team. Make the effort to wash, clean and dry your feet and socks every day plus always carry a spare set of socks without fail! Report ANY concerns to your closest medic as a simple case of foot fungus is capable of rendering you immobile and may be easily fixed with a simple medication or cream. Confirm your combat boots are in good condition before any missions or patrols. 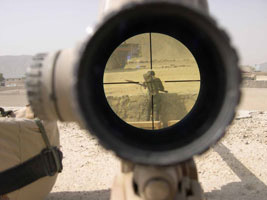 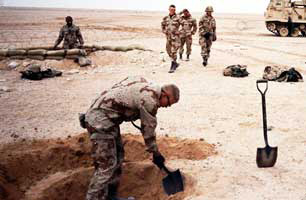 Mortars are an extremely effective and portable battlefield weapon becoming more popular with modern war conflicts. They inflict devastating effects on the body if caught in the shrapnel blast from severe lacerations to instant death.

9. Although a tempting scenario, never dig in or sleep under trees, thin roofing or by solid walls. This can turn the typical ground burst mortar fire (usually less of a worry with it's predictable blast pattern and spread) into an unpredictable air burst explosion sending shrapnel in ALL directions.

When the mortar contacts anything above you it will detonate causing shrapnel and debris to shower down on you - even while in a hole. If you want to sleep inside any structure, ensure it is adequately strengthened with sandbags both on the roof and surrounds.

The enemy play on an unprepared mindset that is typically predictable in the human psyche where you are already winding down in anticipation of the end of a mission. Stick to your standard operating procedures and don't give them the chance. When in battle or at war, remember - you are a soldier 24/7 - act like one, follow proceedures and you are more likely to return successful from your deployment.