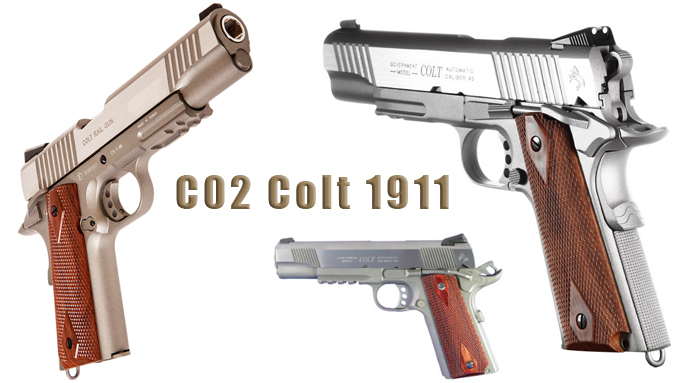 IN ALL THE HISTORY OF MISLEADING GUN NAMES, THIS HAS TO TAKE THE BISCUIT. WE'LL SET THINGS STRAIGHT BEFORE EXCITEMENT SETS IN. THIS IS NOT A RAIL GUN, WHICH IS SOMETHING TOTALLY DIFFERENT AND OF A SECRETIVE MILITARYTESTING KIND OF NATURE. NO, THIS IS SIMPLY A 1911. DISAPPOINTED? YOU SHOULDN'T BE BECAUSE IF YOU LIKE 1911S, THIS IS ACTUALLY A PRETTY DAMN FINE EXAMPLE!

The 1911 is basically the USA personified in a handgun. It's a firearm equivalent of a hamburger, the Statue of Liberty or only being able to buy bottles of Coca Cola that are so big you could drown in them.

Firearm luminary, John Browning designed the 1911 around the turn of the 20th century and Colt were one of the first selection of manufacturers to produce the semi-automatic .45 caliber pistols under license.We'll spare you the history lesson as it's one of the most well known stories in all of firearms and there are plenty of books and other information that cover the subject. It suffices to say that the 1911 design is about as important to firearms as the Ford model-T is to motoring.

Now, in this day and age, many variations of the original 1911 design exist and although the core of the weapon is the same, modernisation has enhanced the weapon over it's considerable service period.

This official replica of a Colt railed 1911 design combines classic looks with just the right level of updates to keep things competitive with the likes of today's new polymer handguns. The rail being the reason for the odd naming convention... Well, that combined with some slightly awkward marketing blurb.

So what do we have in terms of a replica here then? Well, as you can see from the accompanying imagery, the 1911 is actually a real looker. Personally, I'm not a 1911 fanatic but if I were to own one, this one certainly has the aesthetic I'd be after.

As we have come to expect from manufacturers outside of Japan, the Cybergun 1911 is all metal externally, or at least what you would expect to find made of metal on the real thing, is made of a metal on the replica. We say "a metal" because it's not the steel or aluminium you'd find on a real weapon, instead a lower grade alloy.

That's not to say the gun is made from pot metal though, it's just not a $2,000 worth of machined steel which is probably a good thing. What you do have though is crisply shaped and finely finished with pleasing hard edges and defined lines.

The gun is finished in a two-tone steel effect with the lower allegedly being Cerakoted in a dusky, matte silver and the slide having a sleek, brushed stainless effect. I don't personally like the dusky - silver as much as some might as I feel it looks a little "cheap" but alas if it is actually a Cerakote finish, it's the same as that used on real pistols.

The lower is a standard modernised 1911 design featuring a rounded trigger guard with the dust cover forward of this featuring a 2 slot, picatinny accessory rail that's ideal for fitting a light or laser module. The lower also feature s bolt on pistol grips, in this instance a checkered patterned part made from plastic but convincingly finished to look like wood.

This gives the gun a great "classic" look, the back of the grip features a familiar gnarled pattern and a grip safety that depresses and releases the trigger when a positive grip is maintained.

There's also a mid sized beavertail guard at the top of the backstrap that serves to guard the hand and protect the hammer mechanism. Additionally there's an ambidextrous thumb safety that's also finished in the same dusky silver as the rest of the lower.

The hammer and trigger are also the same matt silver colour, the hammer being a skeletal design and the trigger being a curved design with three holes drilled through, presumably for style points as much as they are for lightening the weight.

The only submissions to restriction on replicas are the F marking, the Cal 6 MM marking and a Made in Taiwan marking discreetly layered in to the lower. These are to adhere to the law in some EU countries and are tastefully applied.

Overall, the gun is externally very, very close to the real thing and looking at images the only distinct difference we can find is the rail itself. On the real weapon, the rail is a multi-slot offering and since the Cybergun product presumably uses OEM parts, it's a shorter design. Other than that though, this thing really does urge you to pick it up and have a play.

If you are familiar with 1911s, the Rail Gun won't throw up any nasty surprises in terms of handling and manipulation. It's fundamentally identical to most 1911S and Hi-Capa type handguns out there making for a consistent experience.

Personally I find the 1911 slide catch to be positioned in a less than optimal spot and the ambidextrous thumb safety often causes me issues as I have large hands and often tend to nudge the catch up accidentally. If you are a more proficient user, you will no doubt find the gun easier to use.

It's impossible to criticise Cybergun's choices of parts and assembly here, the whole things is very well put together and ready to operate straight out the box with no adjustments of tweaks required. Even the magazine and slide operate smoothly from the word go without any "running in" to speak of. 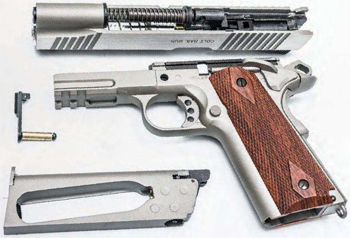 Traditionally all metal GBB 1911s suffer from the issue of "cool down" more than most. This is basically because they have small, slim magazines that don't contain a huge amount of gas and that lose heat rapidly. This means the gas inside them produces less pressure and you'll struggle to empty the magazine of BBs before it runs out of puff.

Additionally the Cybergun 1911 features dual recoil springs, one which shrouds the outer barrel, also acting as a stabiliser but also speeding up the return of the slide.

This Cybergun 1911 instead uses 12 gram CO2 sparklets to propel the BBs instead of gas refilled from a can. C02 guns have their foibles of course, some being a little bit to aggressive in certain conditions and also the capsules being a little more tedious and long-winded to replace.

Generally though, they tend to leak less and in this instance, actually give the gun plenty of grunt to clear the magazine and lock the slide back on empty, with the temperatures we tested the gun in, the velocity stayed well under the magical 340fps mark too, making it a solid choice as a winter gas pistol, something that metal 1911s generally don't excel at!