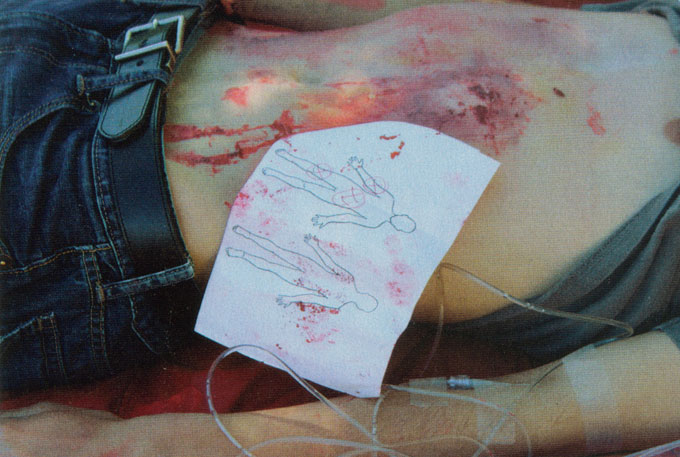 ABOVE : Practice settings are always perfect venues to allow for development of instinctive medical skills. First time you open a chest seal shouldn't be when you are looking at a bullet wound.

The tool bag of the tactical medical first responder includes a finite and easily mastered collection of devices. In tactical medicine, each piece requires not just an understanding of how it is applied and for what indication, but also facility of the application while under duress.

In order to master care under fire, practice and repetition are essential. Without practice, any one of these life saving items can become not just a source of anxiety, but also a liability if incorrectly applied.

Chest seal devices are used for the treatment of sucking chest wounds (SCW). I will examine the different types of chest seals, and how and why they are applied.

An SCW occurs when the chest is penetrated by a projectile or object, resulting in a defect (hole) that allows air to move between the chest cavity and the outside environment. When an SCW victim breathes in, air is drawn through the SCW into the chest cavity. This air may accumulate in a space between the lung and its lining called the pleural space. When breathing out, some portion of that air can escape. 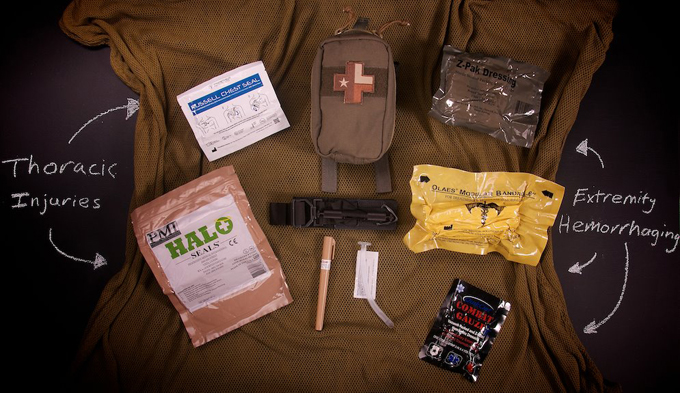 An SCW not only decreases a victim's ability to breathe, but also puts them at risk for imminently deadly consequences. If air drawn in through an SCW remains within the pleural space, over time it can accumulate under pressure, resulting in a deadly condition called a tension pneumothorax.

So an SCW is no more than a hole in the chest through which air moves in and out of the chest cavity. The intuitive treatment of simply plugging the hole is exactly what combat first responders have done for hundreds of years. In World War II, the use of petroleum gauze packing or an occlusive dressing was the mainstay of battlefield care.

Over half a century later, the basic premise has not changed. The general idea is plug the hole. If a first responder has petroleum gauze, a plastic bag, duct tape or a vented or non-vented chest seal, any of these will work to plug the hole and prevent air from moving into the space between the lung and the chest cavity.

As with all trendsin medicine, the initial approach of occlusion versus using a three-sided dressing has vacillated back and forth. In field use, simple dressings taped on three sides to theoretically create a one-way valve are time consuming and functionally unreliable. Today, using traditional three-sided dressings in treating SCWs has largely been replaced with valved or non-valved chest seal devices. By placing a chest seal over an SCW, entry of air through the SCW is stopped, improving breathing and reducing the risk of fatal complications.

Modern chest seal devices are occlusive chest dressings that have evolved to optimize the treatment of penetrating chest wounds. All chest seal devices have a sticky adhesive on one side that comes attached to a peel-off release liner. They are very simple to apply and, in many ways, not much different in application than a simple band-aid.

The challenge of chest seal application is not in the complexity of the device, but rather the austere circumstances in which it may be applied. Under stressful circumstances, something as simple as the application of what resembles a band-aid can become quite a harrowing task. For this reason, the key aspect of being prepared to apply a chest seal while under fire is training to do so in a similar practice environment. In the case of chest seal devices, the first time you open one shouldn't be when you are looking at a bullet wound.

Currently, there are close to 20 different chest seals on the market from almost as many manufacturers. Medical chest seals are typically of two general classes: valved (vented) or non-valved (non-vented).

Vented chest seals, like those made under the trade names Asherman, Bolin, Hyfin and SAM, are constructed with centrally located valves that allow one-way movement of air out of a sucking chest wound (SCW) but eliminate air entry into the chest cavity.

Charles Bolin developed the Bolin Chest Seal. Bolin developed his three valve design from valves that he saw being used in coffee bags to allow one way movement of air, which was ideal for keeping coffee fresh. Using three of these "coffee bag" valves in each of his chest seals, Bolin's design upped the challenge to create new approaches to one-way chest seal valves.

The Hyfin Chest Seal was developed using a one-way flap and channel aimed at achieving the same result of one-way movement of air and blood.

Probably the most evolved valved chest seal design on the market today is that made by the SAM Corporation. The one-way valve found on the SAM device includes a domed valve guard that al-lows the valve to drain in any position even if the casualty is lying directly on top of the device. The SAM device and its packaging are also optimized for use in low-light conditions.

The second group of chest seals are non-vented products that lack a oneway valve and instead use advanced hydrogel or other fluid-resistant adhesives to provide a very aggressive seal around an SCW. This simple approach allows for reduced bulk of the device and excellent adhesion but, due to the absence of a vent, requires familiarity with venting (porting) of the SCW. Porting of an SCW becomes a vital procedure if the complication of a tension pneumothorax is suspected.

Non-vented chest seals are manufactured and sold under trade names that include HALO, H&H, Hyfin, and SAM. In addition to the presence or absence of a valve, chest seals can vary in size, foldability, water/dirt resistance, and adhesive strength.

The pressing question in everyone's mind is which product is best for field or live tissue use.

Gregg Housler with the U.S. Army Medical Materiel Agency has constructed a study to objectively compare all the current chest seal products on the market. Until we have such data, the experience of battlefield medics supports the use of productsthat are easy to store and fold, and have an extended shelf life, aggressive adhesives, dual packaging for addressing both entry and exit wounds, and tabs to allow venting of wounds.

ABOVE : Practice chest seals offer inexpensive and comfortable alternatives to actual medical chest seals in practice environment. Without practice, fine motor movements like opening packaging and peeling the release liner from a chest seal, through simple to perform, degrade rapidly while under fire.

In the venue of training, having a standardized approach to chest seal placement affords seamless casualty care. The approach taught by SWAT Trauma Assistance Training (STAT) of San Luis Obispo, California is the CORPS/PD/EMS approach. The idea behind this acronym is that irrespective of the branch of service, i.e., Military, Police, or EMS, the approach is the same.

In this acronym-driven method, the trainee is instructed to Cut and Open clothing, Remove and Peel the chest seal device, Swipe the skin around the wound and apply the seal (C-O-R-P-S). P-D stands for Prepare to Dart or Port Device. And lastly, E-M-S entails looking for Exit wounds and Moving the victim to a Staging area to Manage Shock.

This simple, regimented approach to torso trauma is easy to learn and retain. Practicing this method at training is key, as it allows for the development of instinctive medical skills when called upon to provide care under austere conditions.

Though true in theory, the adage that the best chest seal to train with is the one you carry into battle falls short in practice. Medical chest seals can be expensive and painful to remove from hair-covered skin. Trainees can end up looking like Steve Carell after being waxed in The 40-Year-0ld Virgin.

In order to train with realism and low cost, and avoid trainees looking like "mano-lanterns," the Practi-seal line of training products was developed by S.T.A.T. Simu-seal and Practi-seal were engineered to simulate chest seal placement while being easily removable from hair-covered skin without discomfort.

These cost-effective practice chest seals improve the familiarity and muscle memory of tactical first responders in opening and applying chest seal devices. Both products display vivid warnings indicating that they are for training use only. They are also endowed with a conspicuous hole in the center of the device to prevent their inadvertent use as a chest seal, while prompting trainees to center the device to an SCW.

The Simu-seal device is a practice chest seal that is color coded in blue, the universal color designation for practice or inert equipment in law enforcement and military settings.

Sucking chest wounds and subsequent tension pneumothorax represent one of the few preventable causes of death in the tactical environment. Being familiar with the chest seal product issued by your agency, as well as practicing with either real or practice chest seals, will assure that your skills are instinctive and reproducible when moments count.

Dr. Rushdi Cader is a graduate of the UCLA Emergency Medicine Program and serves as Medical Director of the San Luis Obispo Regional SWAT Team. Dr. Cader has been an instructor at the FBI Southern California Tactical Medicine Program and has volunteered with the International Medical Corps in several regions of conflict and natural disaster. He currently practices Emergency Medicine in San Luis Obispo, California. 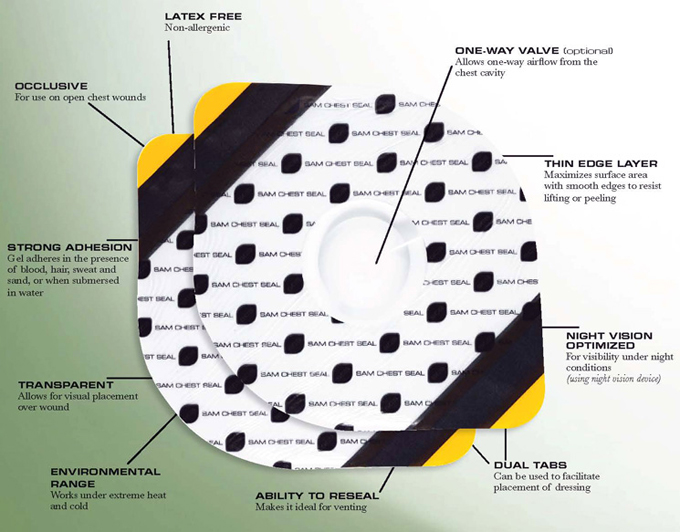