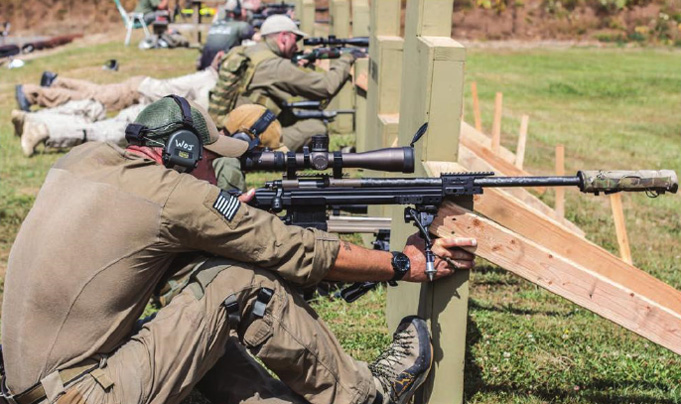 Certain events that take shape in our lives were written before our book was ever opened. If you don t believe it, consider the trail of a 14-year-old country boy who grew up on a farm outside of Niagara Falls in western New York.

Truth be told, he was destined to risk his life to save the lives of others. He was born a thrill-seeker; and at the age of 35, his blood still flows with adrenaline. His name is Caylen Wojcik.

Growing up, Caylen was surrounded by the military mystique of his grandfathers and great uncle. Like many children, he was fascinated by the excitement and dangers of war, and the power of tools that soldiers carry.

When he was handed a rifle of his own, he started shooting it—religiously. By the time Caylen was 15, he started hand-loading his own ammunition and shot at 500-yard targets down the rows of an apple orchard. (Had the setup allowed, he would've shot farther.)

During that same time, a family friend taught him how to hunt whitetails with a bow and a slug gun.

The course of Caylen & fate unraveled quickly. At the age of 17, he enlisted in the Marine Corps with the ultimate goal of becoming a sniper.

After one western Pacific deployment as an infantryman, he returned stateside and tried out for the scout sniper platoon. His skills proved to be a perfect match.

Question: What were your primary motivations for becoming a sniper?

Wojcik: "I wanted to follow in the footsteps of my family. I was attracted to the 'action guy' lifestyle and I love challenging myself. I had a passion for long-range shooting, so I thought there would be nothing more amazing than becoming part of the best snipers in the world."

Question: Did you join the military for patriotic reasons?

Wojcik: "As a young person, I didn't understand the meaning of patriotism. I joined during peacetime, so I really just wanted to do something awesome. The patriotism eventually set in and took its shape after I matured and understood what it is that we fight for, and what it is we do for our country."

Question: You put yourself in a position where your life was on the line. How did you accept that and keep your head straight?

"When a Marine dies on a grenade, they do it so their brothers can live. War is work, and we pride ourselves on doing our jobs and doing them well."

Question: On the flip side, a person in your position must make the conscious decision to take other human lives. How does a guy come to terms with that?

Wojcik: "What you have to understand is that you must have the moral courage to do what's right. That's why we have volunteer units—because not everybody can do what we do."

"From a sniper's perspective, when you take a life you're saving many lives. The guy we catch in the middle of the night trying to place a roadside bomb . . . we kill him because we're saving lives."

Question: It's obvious your actions and decisions as a Marine were selfless, so how do you react when a civilian thanks you for your service.

Wojcik: "It's hugely wanning when somebody thanks me for my service and shakes my hand I view it as very humbling because it makes me feel like I've done something light."

Question: Speaking of being humble, pop culture often depicts snipers who brag about numbers of kills or long-range kills. In speaking with you, this doesn't strike me as being realistic. Is it?

Wojcik: "No. None of us walk around and wear 'confirmed kills' like a badge of courage on our chest. Combat is really weird."

"You could be walking down one street and be completely unimpeded by the enemy, and your comrades could be two blocks away in the fight of their life."

"Either way, you're no less of a man or a Marine. The people who post their kill accomplishments are, in my opinion, doing so for immoral purposes."

"Real snipers pride themselves on being silent professionals. We do our job, we bring all of our Marines home alive and in once piece, and that's the biggest accomplishment we can make."

Question: Let's talk about hunting. How did you become a hunter as a kid?

Wojcik: "I started to show interest in hunting when I was 12 years old. My family didn't hunt, but they knew a local guy named Bill Joseph who was a hunter, so they asked him if he would be willing to take me under his wing."

"Bill was, and still is, a very successful hunter; and he used 'tough love' to teach me how to hunt. He definitely taught me a lot."

Question: Do you remember the first deer you killed?

Wojcik: "Yeah, it was a whitetail doe, with my bow. I just remember wondering, 'What's going to happen after I turn this arrow loose?'"

"For me, the anxiety of the situation wasn't the deer standing there; it was the question of what would happen when I pulled the trigger. It was pretty straightforward—I made a great shot and she fell over and died!"

Question: You joined the Marines at such a young age. Did you hunt while you were in the service?

Wojcik: "I didn't do much hunting when I was in the Marines. I was so busy training that I didn't have time to hunt. There were some deer on our base in southern California, and we spent a lot of time glassing. I saw some nice bucks in some of the training areas, but I never hunted them."

Question: When did you depart from the Marines and start hunting again?

Wojcik: "In November of 2004, I took shrapnel through my right knee from rocket fire during Phantom Fury—the operation to push insurgents out of Fallujah in Iraq."

"This led to the end of my military career. Eventually, I moved to Washington and decided to start bow hunting again. Being from the east coast, the west was so big and intimidating."

"I was totally out of my realm with the spot-and-stalk style of hunting, so I befriended some area hunters in a local archery shop and they showed me the ropes."

Question: What's your favorite type of hunting these days?

Wojcik: "My number one passion is high-country, mule deer hunting. My friend got me into the whole backpack-hunting thing, so that's what I do now. You earn it."

"Anyone can drive a logging road for 12 hours and hope that something jumps out so they can shoot it. I just like doing extreme stuff; and with backpacking, it's all about relying on your own physical abilities."

"I took a couple of animals with my bow in Washington, but now that I teach rifle-hunting courses, it makes more sense for me to hunt with a rifle because it builds credibility."

Question: Where are you a rifle instructor and what/ who do you teach?

Wojcik: "I 'm the Director of Training for Magpul Dynamics Precision Rifle Operations. I lead two different types of hunting courses. One is a two-day Precision Hunter course—hunters bring their favorite rifle and I teach them how to run it to their maximum potential."

"The other is called the Backcountry Hunter course, which is the Precision Hunter course plus three days of backpack-hunting training in the Cascade Mountains. All the details are at www.MagpulDynamics.com."

Question: You're obviously a proficient long-range shooter. Do you prefer taking long shots as a hunter?

Wojcik: "I'm not going to complain about close shots at all. You see a lot of hunters on TV shows, shooting elk at 1,200 yards, but that's not what I do."

"Even with a 500- to 600-yard shot, there's a lot involved. You need to have the observation skills to locate the animal and the ability to get into a shooting position and make a responsible, ethical shot."

Wojcik: "My go-to cartridge is the 6.5mm Creedmoor. It's an awesome mountain-hunting caliber.

"A lot of people might think I 'm crazy, but hunters often substitute improper shot placement for a big caliber. In my personal opinion, shot placement trumps everything."

"It's a flat-shooting cartridge, and I shoot Berger bullets with a high ballistic coefficient and excellent terminal performance. I get virtually the same energy with the 6.5 as I do with a .300 Win Mag, but with a fraction of the recoil."

Question: What's the most hardcore backpack hunt you've participated in? 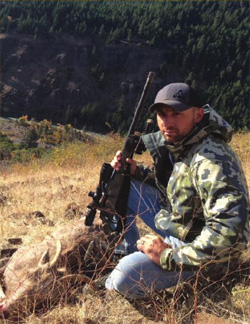 Wojcik: "My buddy, Luke, scored a black bear tag for eastern Washington. We logged 40 backcountry miles in four days. Outside of the military, it was one of the most physically demanding things I've ever done."

"The area where we hunted was very steep, in order to cover any distance, we had to do a lot of climbing. On our fifth day, we packed up 12 shed elk antlers that we had found and we started heading back to camp."

"We had walked only 50 yards when we spotted a huge, cinnamon black bear at 370 yards. Within two minutes, the bear was down. We had to carry the bear out nine miles and about 2,500 feet of vertical elevation to get back to camp."

"I had to be on the road by 11 a.m. the next morning, so we packed our 12 elk sheds and camp gear—easily 120 pounds per man—and hiked seven miles to the truck, grabbed a few hours of sleep, and ran back down the hill the next morning to retrieve the bear."

"I bet we moved about 400 pounds of gear, bone, meat, and hide up that hill. I will remember those five days for the rest of my life."

Question: What's on your plate for future epic hunts?

Wojcik: "Luke and I found an over-the-counter Montana sheep tag. It's over-the-counter because you have to walk 12 miles to get to the sheep, and it's in grizzly country. We're planning that for 2015."

"We'll do a coin toss to determine who gets to shoot the first year; we'll take a year off and then go back the following year, and the other guy will shoot. There's no way we could manage getting two sheep out of that country in one trip."

Question: Do you have any words of wisdom to share with fellow hunters?

Wojcik: "Yeah. Understand why you're out there. Make sure you're doing it for the right reasons—that you're doing it because you love it. Don't take it so seriously that you'r e not having fun."

"Hunting is a right we enjoy as Americans. However; without the selfless service of men such as Caylen Wojcik—a real 'Celebrity Hunter'—our favorite sport would undoubtedly be nothing more than a privilege."