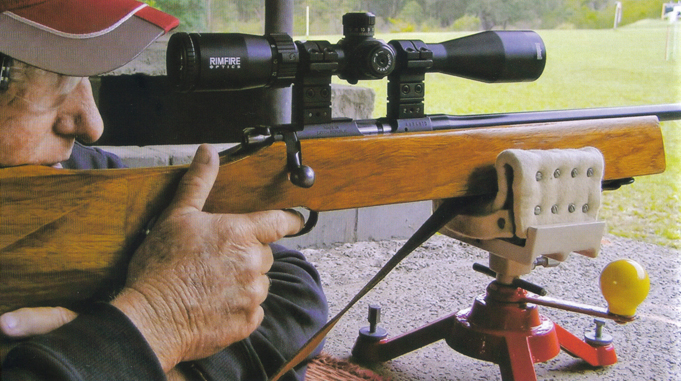 Bushnell scopes have made their American reputation for a generation with performance, value and reliability. Today Bushnell offers an extensive range of optics from the basic series to high end scopes. Bushnell sent two of their new scopes for review, a Trophy 4-12 x 40mm and a Rimfire Optics 6-18 x 40mm.

The new Bushnell Trophy series arc variable power hunting scopes ranging from 1.75 - 4x to 6-18x covering close range brush hunting to serious varminting. The 4-12x power range of the Trophy on review covers general hunting, similar to the 3-9x, but with some bias toward varminting and longer shots.

Screw caps protect the resetable finger controlled adjustment turrets which move the image 1/4 per click @ 100y. The adjustment marks are clear, individual clicks can be felt and most importantly the point of impact follows the adjustment made. The changed location of the parallax focus adjustment differentiates the new 4-12x Trophy from the previous model, the Trophy XLT. The side focus arrangement of the new scope is a far more convenient parallax adjustment than the adjustable objective (AO) system of the XLT model, particularly on a hunting scope.

Hunting scopes of 12x and less do not need adjustable parallax and many get by with parallax fixed at 100 or 150 yards. However, the parallax adjustment does have advantages. It allows the Trophy on 12x to focus clearly down to 10 yards in addition to maximum clarity at all distances, potential parallax aiming errors are also eliminated at short and longer distances enabling more precise shooting.

The Trophy 4-12x is therefore equally suitable for air, rimfire or centrefire rifles because its parallax free accuracy and clarity can be adjusted to suit any rifle's shooting distance. We can include air rifles because the Trophy fulfils the vital requirement of exceptional recoil resistance. (All Bushnell scopes are built to withstand the unusual jarring recoil of spring piston air rifles.)

Bushnell's 4-12x Trophy is a particularly versatile hunting scope that will suit most rifles and types of hunting. It offers full accuracy and clarity from 10y/m to infinity via a convenient side parallax adjustment. Optics are clear but the surrounding black circle or border around the image is wider than on most modern scopes. Its accuracy, reliability and optics are good and at around $449 it offers good value.

Bushnell's Rimfire Optics scopes are also a new series. The 6-18x40mm subject of this review has the highest magnification in the group. It is suitable for precision hunting or varmint shooting of small game on an accurate .17HMR or it makes an ideal entry level target scope for a .22LR calibre rifle, easily fulfilling the basic optical needs of seeing bullet holes out to 100m and reducing magnification to below lOx for rapid off-hand shooting.

The Rimfire Optics 6-18x 40mm is surprisingly light and compact at 577g and 335mm length. It has the industry standard one-piece main tube, one inch mounting diameter, side parallax focus and an easy to grip power control ring.

Its 40mm fully multi coated objective lens gathers enough light for the higher powers even on cloudy days. However, eye relief and eye centring has to be pretty well spot on beyond 16x. Eye relief and eye position become more critical as magnification increases, well demonstrated by the exit pupil diameter, which on this scope is a generous 6.6mm at 6x but a tight 2.2mm at 18x. For this reason experienced shooters set up their scope and comb (stock) relationship with scope set on maximum power and shooter in correct shooting position.

The adjustment turrets are uncovered so they are always ready for use. They are a good size at 27mm diameter for a good secure grip, helped by serrated edges. A good firm grip offers sufficient control to count the clicks by feel and or sound.

This mechanism has both, the more important distinct feel of the click and the audible click which can be lost to background noise. Thanks to the large turrets, the click marks and the numbers are easy to see as is the fixed base mark.

Both turrets can be reset to zero, another necessary feature on a target/varmint scope. Both varmint and target shooters must be able to rely on the click or turret adjustments of their scope. Turret adjustments proved fully reliable on the Rimfire 6-18x.

2. Rimfire Optics turrets get top marks for ease of operation and clarity of settings.

3. Ballistic elevation turrets for .22LR and .17HMR are quick to install after appropriate zero setting. Checking point of impact at usual shooting distances is recommended.

The scope arrives with three elevation turrets, the original marked with white 1/4 MoA click marks and MoA numbers and two others with blue click marks and numbers. The blue marking indicates bullet drop compensating turret, for the .22LR or the .17HMR calibres. The respective calibre is marked on the top, the small marks are normal click marks but the position of the numbers represents the elevation required at that distance in yards, assuming correct zero setup for the given calibre as per user manual. Before using these turrets on a bunt, it would be prudent to test the impact points at two or three commonly used distances because there are significant ballistic differences among .22LR ammunition in particular.

The Bushnell Rimfire Optics 6-18x 40mm is specialised for rimfire precision shooting and it does this very well. Tested on the author's Field Rifle in competition, it scored three possibles from the final four targets.

It will also suit small game hunting at longer distances or just precision shooting for self-satisfaction. It has good optics and user friendly turret operation. At $399 RRP it will be a tempting proposition to rimfire varminters and club competitors.

ABOVE : The two scopes for this review - Bushnell's Trophy and Rimfire Optics series. The Trophy 4-12 x is an effective and particularly versatile hunting scope. The Rimfire Optics 6-18 x 40mm is surprisingly compact considering its power range.