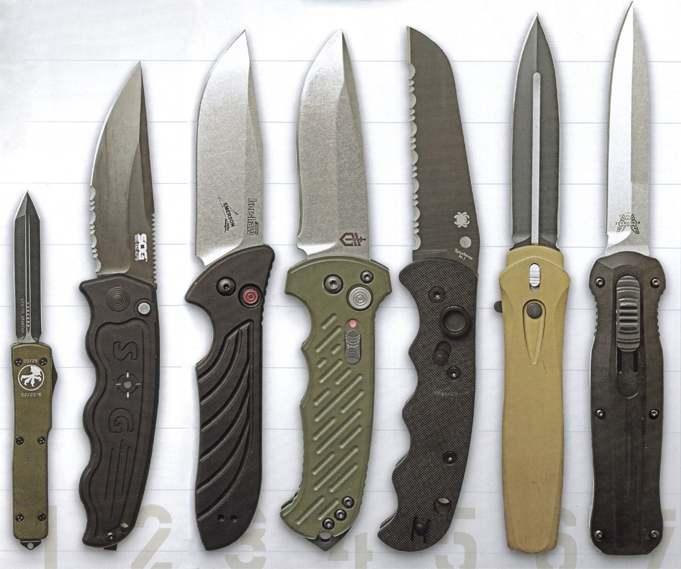 Who doesn't like automation? Technology has given us ATMs, motion-sensor doors, and belt-felt full-auto M240 Bravos. Naturally, we love automatic knives, too. Sadly, they're highly regulated in the United States and around the world. Many politicians fear this genre for the same reason they fear guns: ignorance. So let's drop some knowledge.

Automatic blades open, well, automatically when you push a switch, lever, or button. While there are variations, they can be lumped into two categories: folding and out-the-front (OTF). The former looks and works similarly to a common pocket knife.

So, does "automatic" mean better? Not necessarily. As with firearms, which knife you buy should be dictated by what you plan to use it for. Want a speedy self-defense weapon? Some auto knives open slower than manual folders. Looking for a heavy-duty tool? Consider a fixed blade.

After all, more moving parts mean more chances for failure. Also, some autos don't have safeties, so accidental activation can leave you with a hole you weren't born with.

Then there's that whole legality issue. (Note: Not all of the companies whose knives are featured here will sell them online due to federal laws. You may need to find local independent retailers.) But, if you've done your legal research, have the cash, and live in a region where auto knives are kosher, you're sure to find a knife here that gets your autonomic nervous system pumping.

Microtech is known for automatic-knife innovations. Their Ultratech model is a modern classic. The puppy we're testing here is the low-carb version of the Ultratech, reduced in size by 30 percent(hence the name UTX-70).

It's the smallest and lightest one in this buyer's guide. Like its bigger brother, the UTX-70 is a double-action OTF with a spring that remains at rest in both the open and closed positions to minimize fatigue. Made in the USA.

The SOG-TAC lineup was designed as a backup weapon for cops and troops, so it's built to withstand plenty of punishment.

It fits in the medium-to-large category, but feels compact due to its slim and lightweight 6061-series aluminum body.

The clip-point blade features a black titanium-nitride finish and a partially serrated edge, but it's also available with a plain edge. It features a safety switch that can keep the blade locked opened or closed.

In recent years, Kershaw Knives has teamed up with famed knife-maker Ernest Emerson to produce his groundbreaking custom designs at mass-market quantities for a more affordable cost to the consumer.

The Launch 5 isn't exactly one of their cheaper collaborations, but it's no less impressive.

It features a push-button action, a CPM 154 blade, and an aluminum handle. The Launch 5 is made in the USA.

Like most 06 Autos, this model features a blade with premium S30V stainless steel and an aluminum handle with a lanyard hole and a pommel for striking or breaking glass.

Unlike most 06 Autos, this is a special edition model honoring the model's 10-year anniversary.

This birthday edition features an OD green Cerakote on the handle and the Stars and Stripes laser engraved on the blade. Naturally, it's made in the USA.

Originally designed for U.S. Coast Guard rescue divers, the Autonomy is a hard-core tool that can survive not just the usual EDC abuse, but also underwater emergencies.

The blade is made of H-1 steel, a nitrogen-based alloy that's immune to saltwater corrosion. All other components — including the reversible pocket clip — are rustproof and feature a black coating for added protection and increased ninja-ness. Made in the USA.

Pro-Tech is a family-owned company known for making high-quality auto knives, in addition to fixed and manual blades.

This version of its Dark Angel (model No. 3232) comes with a desert-sand aluminum handle and a 154CM stainless steel blade with a black diamond-like coating.

As a single-action OTF, it comes with a safety, a pocket clip, and a nylon sheath. Also available with a stonewashed finished blade and a black handle. Made in the USA.

The Pagan is the latest family of auto knives from Benchmade. Like its siblings, the 3321 we reviewed features a chisel-ground blade, meaning only one side is beveled while the other remains flat — making it stronger and sharper than blades with two or more bevels.

It's also a double-action OTF with an aluminum handle, a pocket clip, and a MOLLE-compatible Cordura sheath. Also available with a black-coated blade for $440 total. Made in the USA.