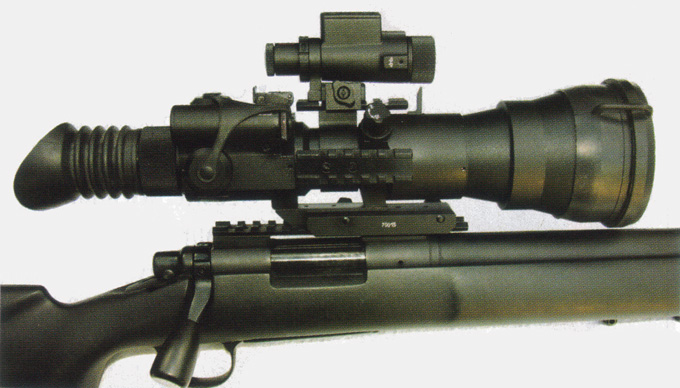 ABOVE : The night scope is shown here complete with the IR illuminator. As can be seen, it's a big unit. The rifle is a custom APRS Remington in an H&S stock chambered in .300 Whisper.

The two-storey hay shed was dark; the faint moonlight did not penetrate, but we had checked it out in day light so as to know where to walk between the large bales of stockfeed and other farm supplies. Torches were not to be used.

Some 30ft above us along the old wooden rafters a gallery of feral pigeons was shuffling for position and sending down a pattering of droppings. A wide-brimmed hat was mandatory. I raised the compressed gas air rifle and activated the night scope. In the absence of external light, the picture was very dim. I then switched on the IR (infrared) Illuminator and black night became green day through the scope. Settling in over a large hay bale, it was down to business. The air rifle coughed and one by one the 'flying rats' tumbled from their lofty roost.

It was almost ungentlemanly to have such an advantage; the targeted birds must have been aware that something was going on, but as it was dark, they just sat there waiting their turn. In time, the floor was littered with our fallen birds and some of the escapees had decided that this was not a good place to be.

The property owner was delighted with the results, as these pests had been fouling his shed for some time and all attempts to remove or discourage them had failed. The fact that the front of the shed was open meant that sealing it off was not an option.

So what was so special about this night scope that gave us the upper hand? The ATN Trident Pro 21A is a second-generation premium-quality night vision device. As I have explained in previous reviews of night vision equipment, the quality of the image is really determined by what generation level the components are made up of. Gen 1 is entry level and can be obtained for less than $1000. As we move up through the levels, the price rises rapidly and to purchase Gen 2 premium, we are looking at around $4000. Gen 3 and above are not usually available to the general public and are mainly for military and law enforcement applications.

The technology behind night vision is generally well-known now and most people have seen examples of it with footage from Iraq, showing ghostly green images in the theatre of war. In simple terms, light (even starlight) photons are collected by the objective lens and then focused onto an image intensifier. A photocathode converts these photons into electrons, which accelerate across an electrostatic field.

They strike a phosphor screen and what we finish up with is a green monochrome image. No, it's never as good as what we can see with binoculars, as we are looking at a re-creation of an image. The bottom line though is that we can see in the dark. As well as being an excellent observation device, the Trident Pro is also a rifle sight with a red-on-green illuminated reticle. It has a built-in Weaver-style mount, which attaches to the usual 7/8 Weaver-type base.

Attaching and removing can be done in seconds. The position of the rail can also be changed with a minimum of fuss. The windage adjustments are half MOA 'clicks'. Magnification is 2x.

The system runs from one CR123A 3-volt lithium battery, the installation of which is a simple matter and the correct polarity order of the battery is indicated on the casing. The on/off switch is located on the end of the battery housing and a quick jab is used to turn the unit on or off.

It is very important to note that the unit must never be used in daylight with the front lens cover removed. Before using the unit, it will need to be focused to the user's eye. This can be done in daylight, as the front lens cover has a small hole in it to allow some vision. The diopter ring is turned clockwise until it stops and then may be turned slowly back until a clear image is obtained.

After dark, or in a darkened room, it is okay to remove the lens cover and put this unit through its paces. A quick jab on the on/off switch will cause a green glow to be seen in the scopc. By holding the button down, the brightness will be increased.

Hold the button down again for the opposite effect. Using the scope like this will give quite a reasonable image after dark. However, the effect is greatly enhanced with the addition of an IR Illuminator. One will notice that there are three extra Picatinny rails on the top and both sides of the unit. We were supplied with a Super 450mW Illuminator, which was effective out to about 60m.

It would be possible to lit three of these units, or perhaps a more powerful (and expensive) unit for greater range. Some mission-specific applications require an illuminator and a laser combined for extra advantages. 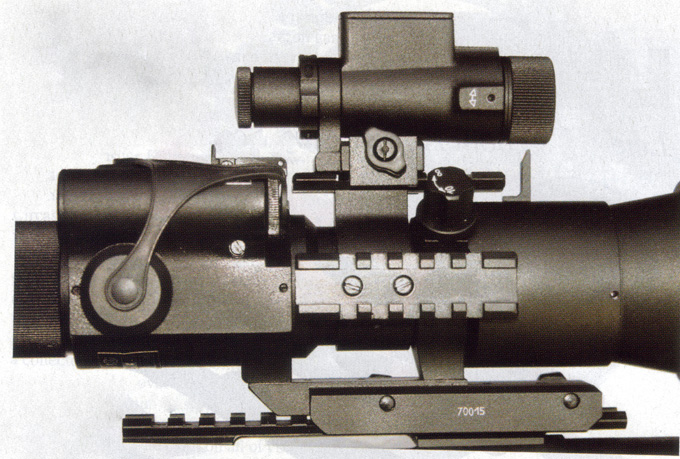 ABOVE : A closer view shows the adjustment knobs and dials and the Weaver-type base and mounts. The Picatinny rail provides for a rock-steady attachment.

The reticle allows for a precise aiming point and consists of posts and central cross-hairs. The central bit is illuminated red and covers an area of just less than lm at 100m. When sighting-in, there are elevation and windage adjustments protected by dust caps.

We were very impressed by this unit, as it performed faultlessly throughout the time we had it. We fitted it to an air rifle for feral pigeon removal as described earlier and it was very effective over several nights. Later on we fitted it to a Marlin .17HMR and did some good work on a rabbit patch that had contained some very nervous inhabitants.

Other uses for this device would be for observing nocturnal animals and when despatching ferals such as foxes, which may have become very shy of spotlights and people.

Yes, it's expensive, but this sort of quality in night vision equipment never comes chcap. If you want the best available to the public and can justify the expense, this is the unit to buy. This product is covered by a two-year limited warranty from the date of purchase.