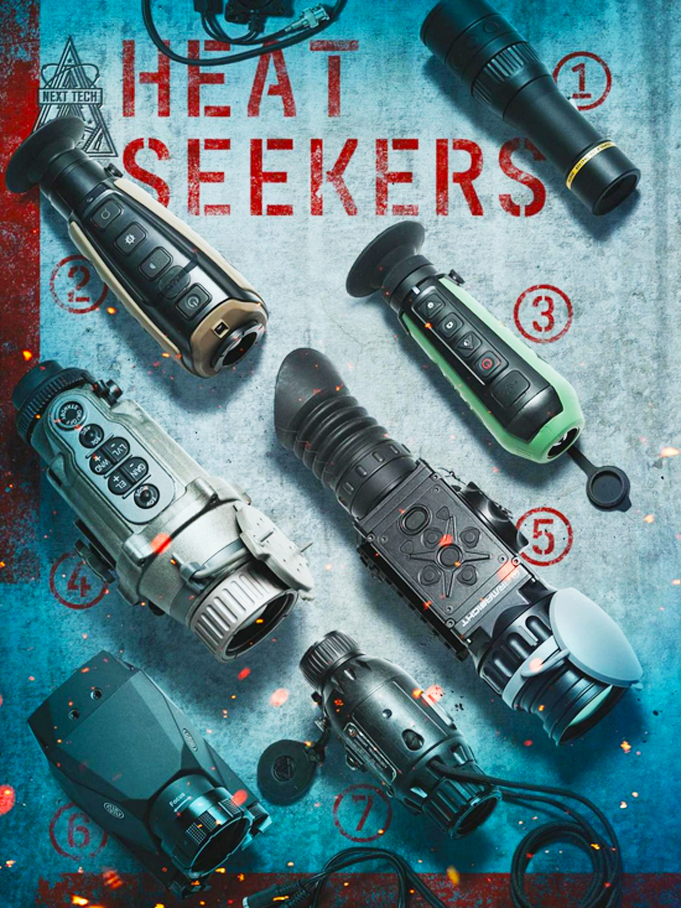 THERMAL IMAGERS HAVE BECOME BETTER AND CHEAPER HERE'S WHY

THE HUMAN EYE is a wondrous instrument, but its observational powers are limited to the narrow band of radiation that, not surprisingly, we call visible light.

This represents just a fraction of the bandwidth of electromagnetic energy that exists in our universe. And our inability to peer into this vast space with the unaided eye leaves us, both literally and metaphorically, in the dark.

At one end of the visible spectrum is blue and violet. At the other end is orange and red. Once we move beyond red light, we're in the realm of infrared radiation, which is invisible to our eyes but which we still can detect through the sensation of heat on our skin.

It is this energy that thermal imagers pick up and then translate into visible light for us. When you look through a thermal imager, you're not actually "seeing" the object as you would with a regular optic. Rather, you're viewing a small screen, like a mini TV. that projects a digital image for your eye based on an interpretation of the thermal energy in the environment.

Many people believe that thermal imagers are restricted for military or law enforcement use, the perception being that they are illegal for civilians to own. Or they think they're too expensive to attain.

Neither is the case, though the issue of their expense has some merit. Even just a few years ago, a quality thermal imager would cost more than $10,000, placing it out of reach for all but the well-heeled.

It's a different world today. Companies like FLIR, Leupold, L-3, and Sig Sauer have all rolled out thermal products with price tags comparable to higher-end scopes and binoculars, costing roughly between a few hundred to two thousand dollars.

Of course, you can still write a bigger check for a top-end thermal unit, but the prices on those are dropping as well.

THERMAL OPTICS USES IN THE FIELD

Basic thermal units are used for observation. This gives sportsmen the ability to retrieve downed game, find a lost bird dog, or just figure out what is crashing around outside the tent at night. Weapon sights are more expensive— $2,000 and up—and can be used for the nighttime hunting of feral pigs, predators, and other non-game animals.

In terms of legality, we have a patch-work of laws and regulations, along with some gray areas, that govern how (or if) thermal devices can be used afield. You'll need to check— and perhaps double check—with the authorities where you live to see what's allowed.

One thing to be aware of is that thermal units do not project any type of artificial light. Many states have regulations that ban the use of any illumination source, including spotlights and IR lights, for hunting. Standard, "green" nightvision often projects light, but thermal is a "passive" technology.

HOW THERMAL IMAGING IT WORKS

The key to thermal technology is the lens at the front of the unit. It is made from an element called germanium, which is similar to silicon. One property of germanium is that it is transparent in infrared wavelengths. It is also expensive.

"The cost of germanium is kind of like [that of] a diamond. As the lens gets bigger, the cost goes up exponentially says Angelo Brewer, national sales manager at FLIR. And the size of the lens corresponds to the amount of thermal energy the unit captures. "What the lens does is focus heat the way a regular glass lens focuses visible light," Brewer adds.

This focused thermal energy then hits a sensor called a focal-plane array (FPA). The FPA uses what amounts to a series of resistors that respond to this energy by generating electrical impulses. These impulses are translated into video pixels on the display that your eye sees, giving you a picture of the thermal environment. The greater the resolution of an FPA, the more detail you get.

Here's another catch with thermal imagers, though. Making FPAs is tricky. There's a fairly high rejection rate. The problem is the manufacturer doesn't know if a particular FPA is going to work well until it has already been built. This adds to the cost too.

But manufacturing efficiencies and the growing use of thermal technology in the automotive, outdoors, and other consumer markets is making thermal imagery cheaper and more accessible.

The question isn't whether hunters are going to start using thermal, but rather what kinds of uses the broader sporting community will deem acceptable.