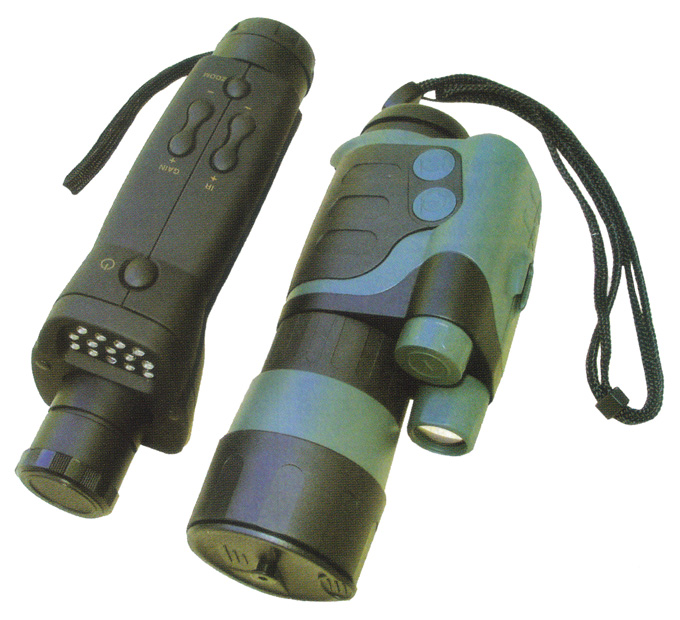 ABOVE : The two night vision units side by side - they are both light and compact and are an affordable addition to a hunter's pack.

Readers may recall that we recently tested some ex-Russian military night vision equipment, which certainly turned night into day and impressed us greatly. The only down side of this was the cost, which ran into thousands. Nice to have, but out of reach of most shooters.

For this review, we obtained two of the better night vision systems that are currently available. Not only did they work well, but when readers see the price, they just might have to add them to the short-term 'wish-list'.

Night vision systems employ some serious technology, but for the lay person, they work like this. Existing light, no matter how faint, passes through an objective (front) lens, and is 'collected'. This light is then directed to and focused upon an image intensifier. A photocathode then takes over and converts photon energy into electrons. The intensifier contains an electrostatic field, across which these electrons accelerate and finally strike a phosphor screen - this is what you get to see and it appears as a green monochrome image. We are all familiar with this type of image, from the TV news footage from trouble spots around the world, especially the Middle East.

The unit on test was the Bushnell Prowler Night Vision Monocular Model 26-4050. It is claimed to be Generation One technology and features 4x magnification and a 50mm objective lens. Vertical resolution is claimed to be 36 lines/mm and the 4050 has a viewing range of 1.5-213 metres.

The latter is based upon clear conditions and a quarter-moon as illumination. These systems rely on some sort of back light as low as starlight. The built-in infrared illuminator has a range of 90 metres, for viewing in complete darkness, and the viewing field-of-view is rated at 30 metres at 90 metres. The night visions power source (not supplied with the unit) comes from a CR123A 3V lithium battery and is claimed to give up to a 20-hour life.

The Russian-made 4050 is a fairly compact unit measuring 163x82x60mm and it weighs in at 448 grams. It can be mounted on any tripod fitted with a 1/4" tripod socket. A carry-pack, neck strap and lens cleaning cloth are included.

Using the unit is a fairly simple matter, as long as certain requirements are adhered to. Bushnell recommends you do not remove the objective lens cover on the night vision device in daylight or artificial light. There is actually a pinhole in this cover that allows the unit to be tested . When the lens cover is removed, it can be attached to a small catch on the side of the unit. On the top side of the unit there are two rubber-covered buttons. The rear button is the On/Off switch and the front button activates the infrared illuminator. Pushing the 'On' button causes a green LED indicator to glow. 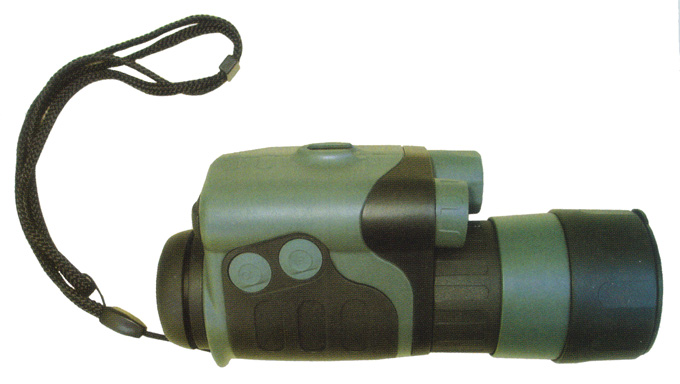 ABOVE : The Bushnell Prowler Model 26-4050 is simple to use and can be held in one hand.

If there is sufficient backlight (such as starlight) you may be able to view the target. In lower-light situations, you should push the IR button. This activates the Infrared Illuminator and it has the visual effect of turning on a spotlight. A red LED indicator shows when this feature is in use. The IR has a limited range, but can be very handy. Remember though, this makes the image much brighter and can affect your night vision for a few minute s afterwards. You must focus the unit befor e using and this is achieved by viewing an object at 100 metre s and rotating the rear lens eye - piece until a good quality image is seen. Final focusing is then completed by turning the objective lens.

In practical use in the field, the normal setting will reveal most targets. However, for targets hiding under trees and bushes, the IR function will seek them out. We were impressed by the clarity of the Bushnell unit and noted that animals the size of elk could clearly be seen out at 200 metres on a night when there was a clear sky but little moon.

One of the more reliable night vision scopes, the whole unit is well-constructed of high-impact material and should stand up to some rugged outdoor use, but like all precision instruments, should be treated with respect. Apart from keeping the lens clean and normal cleaning of the outside surfaces, there is little else to do but change the battery when needed. A two year limited warranty is given.

The Weaver NightView is made by the Meade Instruments Corporation, which is Weaver's parent company. Meade telescopes are famous throughout the world. The Weaver is a slightly smaller device than the Bushnell and has a number of interesting features. Described as an 'observing device', it requires a 9V power supply and this is taken from six AA batteries that fit into a special battery pack. As an alternative, it may be connected up to a 9V supply from a suitable adapter, when unlimited mobility is not a requirement.

One of the most useful features of the NightView is that it has an RCA port, which allows the user to connect it to a screen or VCR, using a normal RCA cable (not supplied). With the monitor set for 'line-in' a sharp image should be seen from whatever the unit is directed at. There may be some security applications that would be well-served by this feature. The unit has a standard size tripod mounting port. 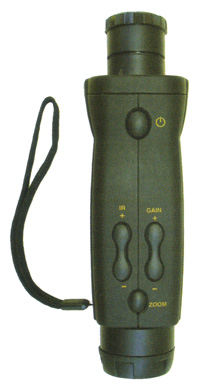 Overhead view of the Weaver NightView showing the controls. It is easy to use after some familiarisation.

The objective lens is 1.5x12mm f/1.4. The imager resolution is 525x420 pixels, and the viewer resolution is 400x225 pixels. Field-of-view is claimed to be 38 degrees. Dimensions of the unit are 183x56x77mm and it weighs-in without batteries at just less than 250 grams. The Weaver employs a Sony high-sensitivity CCD image sensor. The display technology is by ferroelectric liquid crystal. It is claimed that the image is as good as Generation 3 & 4 quality; nobody that we know has access to this level of equipment, so we cannot comment. With batteries installed, you start the operation by pushing the power button at the top front of the unit - it will click when engaged.

In a departure from normal procedures, Weaver actually recommends that you try focusing the unit in daylight to become used to the operation. They also recommend practising with the digital zoom in daylight. The unit comes with very comprehensive instructions. To use the NightView after dark, you have to employ the display brightness and infrared illumination controls. These are situated on the top of the unit and take a little time to become proficient with. We practised in the back yard for some time before venturing out.

One of the nice features was that the unit had a memory and would return to the last recorded settings when switched back on. Another good feature was the ability to place different filters over the eyepiece. Red, green and neutral density filters are supplied. These can be used for such things as preserving night vision when using the unit.

In the field we found the NightView very easy to use and the digital zoom feature was very handy. As with the Bushnell, animals could be spotted at a couple of hundred metres and observed without disturbing them. The Weaver comes with a limited one-year warranty.

Both units tested are of high-quality and very user-friendly once you have become familiar with the focusing systems. There are many uses for night vision and hunters who seek game such as feral pigs that feed in the early hours of the morning will find night vision a huge help.