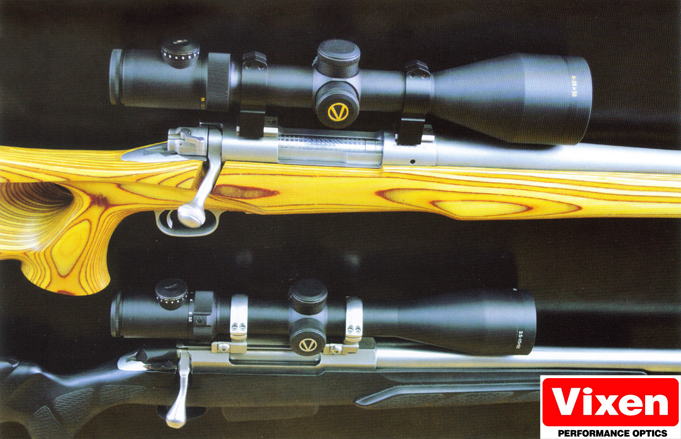 Having now field tested both the Vixen 2.5-15x50 and the Vixen 6-24x58 illuminated Mil Dot reticle scopes I thought it would be useful to compare them. Both are excellent quality, and are waterproof, reliable and in terms of contrast, brightness, lens coatings, clarity and finish they really do compare favourably with more expensive high end European scopes. In the field I used both scopes for general stalking as well as precision hunting.

FEATURES COMMON TO BOTH SCOPES

a. Lens coatings. They are waterproof and have 4 layer, fully multi coated lenses that provide excellent light transition without flaring.

b. Reticles. Both scopes use a long lasting and simple to replace lithium CR2032 battery to power the glass etched illuminated reticles. The Mil Dots are clear and easy to see in the low light of pre dawn and dusk and while day hunting in a wide range of vegetation types. The reticle is also very clear when shooting at night under a spotlight.

e. Diopter Adjustment. Diopter adjustment is ample on both scopes, and ranges from +1 to -1 diopter. Focussing the scope to suit your eye is done by rotating the diopter ring on the eyepiece on both scopes.

DIFFERENCES BETWEEN THE SCOPES

For clarity and ease of comparison, Table One lists the directly comparable differences such as eye relief, field of view and reticle adjustment. Differences between the 2.5-15x50 and the 6-24x58 that require explanation are:

a. Turrets. Both scopes come with low profile turrets that are almost flush with the objective lens, which gives the scope a low profile that doesn't snag on clothing or bush while hunting. The 6-24x58 also comes with a set of long adjustment Vernier turrets for range conditions.

b. Objective lens diameter. The smaller 50mm objective diameter on the 2.5-15 allows for a very low mount on most rifles, however the larger 58mm objective on the 6-24 can also be mounted quite low, and in the end it was only about one size difference in mount height, so you can maintain that all important "cheek weld".

The difference between the two scopes really comes down to magnification and objective lens diameter. The lens Shade and Vernier turrets included with the 6-24x58 will appeal to target and very long range shooters, but the choice will depend on a number of factors including your age, hunting method and if you also shoot competition. Both suupfcjs suit target and precision hunters.

The 2.5-15x50 fitted to my Tikka T3 Varmint in 308 delivers excellent accuracy at all ranges and it really suits the way I hunt and shoot. I enjoyed testing both scopes, and as with all of the Vixen optics I have reviewed, they delivered excellent optical quality at a very affordable price.