A Collection Of Weaver Scopes

Shooters who read various guns and shooting publications may be aware of the ATK Company in the USA. This is a huge company, with many manufacturing arms. In fact, the companies under their wing manufacture everything from rimfire ammunition to the solid rocket fuel motors that power the space shuttle. ATK encompasses brands such as Federal, Speer, RCBS, Champion, Outers and many others.

Recently, they bought the Weaver riflescope company, known as Weaver Optics. They already had Weaver Mounts, so it seemed a logical purchase.

Shooters in America who have been around for a while have probably owned a Weaver scope at some time or another. My first .220 Swift wore a 12x Weaver for many years back in the late 1970s. My current .220 Swift wears a 6-20x40mm Grand Slam. In fact, many Weaver scope and mounts have adorned my own rifles and those of my hunting companions for as far back as I have hunted.

We were sent a box full of Weaver products to have a look at and that kept me busy for a while. There were 10 riflescopes in the box - some found their way onto rifles that were being reviewed at the time, as well as my own.

Let's start with the Weaver T-Series Benchrest & Silhouette scope in 36x40mm AO. This one was finished in matte-black and had the fine cross-hairs fitted. Positive click adjustments of one-eighth of a minute are standard on this model. This scope has adjustable object focusing and the usual rear lens adjustment. The AO is claimed to work from infinity down to 50ft, but in testing, we found that 20 yards was closer to the mark.

For Centrefire Rifle Metallic Silhouette shooting, this scope is fine and the Rimfire match shooter who has the closest target at 40m should have no problems either.

The clarity of this scope was right up there with the best of them and at around 6pm in the afternoon shadows on the NRA Para Range, it was still possible to see the bullet holes at 300 yards!

I have used Weaver T-36x scopes since 1985, when I bought one of the first prototypes from a USA team shooter at the Benchrest World Championships. One of the biggest attractions of the Weaver was the Micro-Trac adjustment system, considered by many target shooters to be superior to all others available. This patented system still exists today. The lenses on the current scope are fully multicoated and screw-on protective caps are supplied as standard equipment.

The T-36x is also available with a silver finish, which looks great on a custom Benchrest rifle, and a cross-hair with a fine dot can also be ordered. At the recent Pacific Regional Shooting Championships, it was interesting how many rifles were equipped with T-36x scopes in the International Rimfire Benchrest match.

The former scope was used during a recent review of the Marlin XL-7 in .270 Winchester. Throughout the test, the scope performed admirably and during the 'click test', it tracked around the target just as any good scope should. Clarity at night was also excellent, as we took this rifle and scope combination out spotlighting and eliminated some targets at various ranges.

The latter scope ended up on my spotlighting rifle, which, at the moment, is a 22 PPC. The 50mm front lens certainly gives a great picture and foxes at around 200m stood out like snail's eyes! Remember, with all of the larger-objective lens scopes that higher mounts may be required to clear the barrel.

For those shooters who want something a little different and don't mind paying a bit more, the Classic Extreme is certainly worth a look. We were sent two models, the first being a Model 800702 in 1.5-4x24mm and the second being a Model 800705 in 2.5-10x56mm SF (side focus).

Both scopes have 30mm one-piece main tubes and fully-coated optics. Illuminated centre-dot reticles are standard on the Extreme models, as is a welcome 4" of eye relief. With the scope mounted on a hard-kicking rifle, this can be of great benefit, as cut eyebrows are certainly not a macho thing - they are something to be avoided by all sensible people.

The lower-powered scope had a dual-X reticle, which is duplex, but the larger one had a German No. 4. This reticle appears as a standard cross-hair with the sides and bottom wire thickened up until it nears the centre. It was very easy to see in failing light, even without the illumination on.

The windage and elevation dials support quarter minute clicks and have the added advantage of being able to lift them to a freewheeling position and then place them at the '0' position once your rifle is sighted-in. This can be very handy if further adjustment needs to be made, as returning to the original zero point is a simple matter.

The Weaver V series are all variable scopes, with raised power rings and multicoated lens. The number after the 'V' determines the maximum power of the scope.

The models supplied were:

The V 7 is an ideal scope for a pig-shooting rifle - just like Goldilocks' porridge, it would be just right! With a 41ft field of view at 100 yards on 2.5x, it makes for an excellent walk-around quick-reflex outfit. The maximum power of 7x is more than enough for most pig-hunting situations, unless they are a long way away. My own pig rifle usually had the scope set around the 4x mark.

The V9 sports what is probably the highest-selling power configuration in 3-9x40. Let's face it, it's a good compromise for most hunting situations in Australia with a centrefire.

The V24 has a wide power range of 6 to 24x. This can cover a lot of shooting situations, including using it as a spotting scope. Unfortunately, in summer in Australia, it is hard to use more than around 14x in most daylight shooting, as the mirage makes it nearly impossible to see anything clearly. 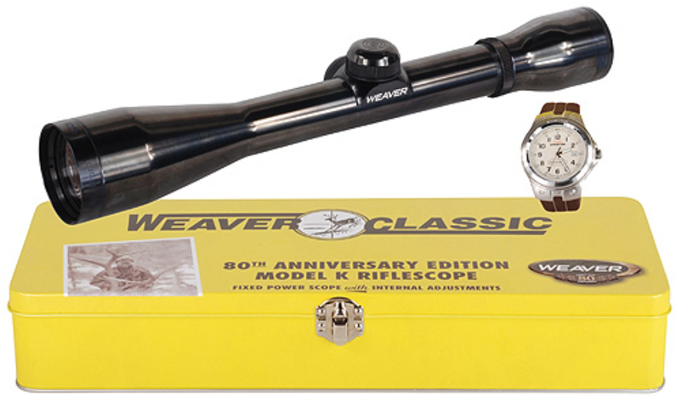 These scopes are designed for rimfires and airguns and are available in fixed and variable configuration. The Model 849430 is a 4x32 in matte-black and weighs in at only 8.5oz. It has a duplex reticle and a 21.6ft field of view at 100 yards.

I tested this scope on a review air rifle and found it to be quite a useful scope. The 3.25" eye relief was handy and after around 300 shots, it was still right on target.

The Model 849431 is in 2.5-7x28 with a duplex reticle. It is also'matte-black (a silver version is available) and weighs 9.75oz. I mounted this scope onto my Sako P94s and fired a couple of hundred rounds testing some ammunition. I worked the scope power up and down during this test and found that the point of impact was unaffected by this. Being a slim scope, it is possible to mount it in low rings to be close to the barrel. Both of these scopes are relatively inexpensive and either will do an excellent job.