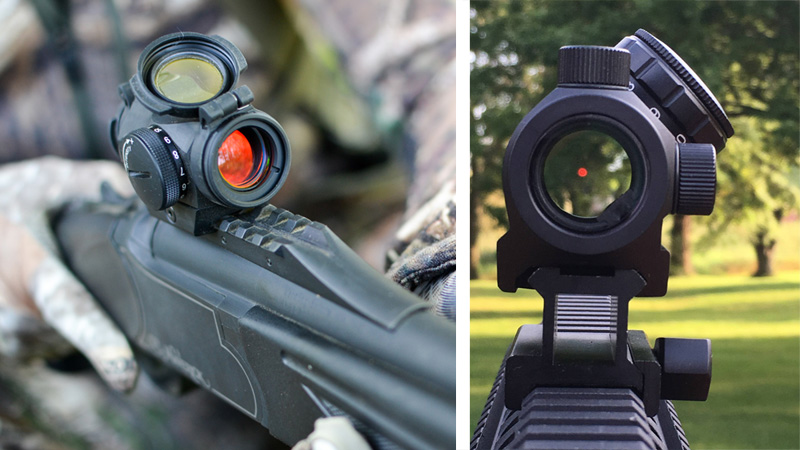 For hunters, competitive shooters, military, and law enforcement, Aimpoint has long been synonymous with red-dot sights. New for this year, Aimpoint is offering three magnifiers to increase the precision of its existing red dots for longer-range shots.

The 3X-C is a standard three-power; the 3XMag-1 is a beefier three-power; while the 6XMag-l is a professional-grade unit with six-times magnification.

All versions are coated in protective rubber and come with a diopter adjustment for crisp imaging. Choose from a quick-detach TwistMount or the new FlipMount, which can be quickly flipped to the side or deployed in your sight line.

At the range or in the field, if the AR is your rifle platform of choice—and you demand a fast-action sighting system—the new Spitfire AR from Vortex might find a new home on your rail.

This sight is built for speed and reliability, no matter the circumstances, by utilizing the Dual Ring Tactical (DRT) reticle. The DRT is etched on the fully multicoated glass, so no worries if your AAA batteries come to the end of their long life.

Light up the DRT with either red or green color with 12 variable illumination settings. If you're shooting a 5.56, Vortex tosses in an extra turret cap so you can rapidly dial your sight to exact yardages out to 700 yards.

SIG SAUER has forged its reputation in the black-gun market with high-quality pistols and ARs. At the 2016 SHOT Show, the company announced a new optics division: SIG Electro-Optics.

As its techy name suggests, all the new SIG optics — from riflescopes to red-dots and rangefinders—contain some form of electronic innards.

The ROMEO series of red-dot sights consists of three models, each using SIG's Motion Activated Illumination System (MOTAC) for outstanding runtimes of up to 62,000 hours.

The R0MEO4 is ideal for hunters, featuring a dual reticle option allowing the user to switch on the fly between a 2 MOA dot or a 65 MOA/2 MOA circle-dot reticle.

The 518 holographic sight from EOTech projects a 1-MOA aiming dot, the smallest in the industry, and it doesn't grow when magnified.

The dot is surrounded by a larger red ring, making it the ultimate reticle for snap shots on escaping hogs or quickly circling the vitals of a gobbler.

It uses a handy quick-release base that mounts to all one-inch Weaver or MIL-STD 1913 rails. Pair it with the G33 magnifier for enhanced accuracy for farther shots.

Double its sighting capability by adding EOTech's Laser Battery Cap (LBC) for a visible laser. Conveniently powered with AA batteries, you shouldn't ever have to worry about going dark.

Tipping the scales at just a tad over an ounce and measuring only a hair under two inches across every dimension, the MeoRed is Meoptas newest and most compact reflex sight.

A super-low profile allows shooters to co-witness it with most iron sights on shotguns, ARs, or handguns that have cutout slides.

The brightness of its 3-MOA red dot can be tweaked manually; the dot's windage and elevation can be adjusted 180 and 120 MOA respectively.

The Micro Reflex Sight (MRS) from Steiner issimply rock solid. It's compact and easy to operate with minimalfrills.

Its holographic red dot allows you to shoot with both eyes open to maintain peripheral situational awareness, whether you're going to battle against hogs, gobblers, or steel plates.

The dot can be manually adjusted to three levels of brightness, or you can rely on the unit's automatic illumination control.

Its integrated screw mount attaches to any MIL-STD 1913 rail orsight platform on just about any type of firearm.

From yoursmallest pistol to your biggest shotgun, the tiny DeltaPoint Pro will do the trick.

The DeltaPoint Pro features a lightweight aluminum housing shrouded in a spring-steel armor.

Leupolds Motion Sensor Technology turns the sight off when its motionless and on with the slightest movement.

The reticle automatically adjusts to optimal intensity based on ambient light levels, or you can choose to manually override it.

Failure isn't an option with thissight,so if your batteries burn out in the heat ofthe moment you can rely on its built-in fallback iron sight.