Why You Should Carry A Knife 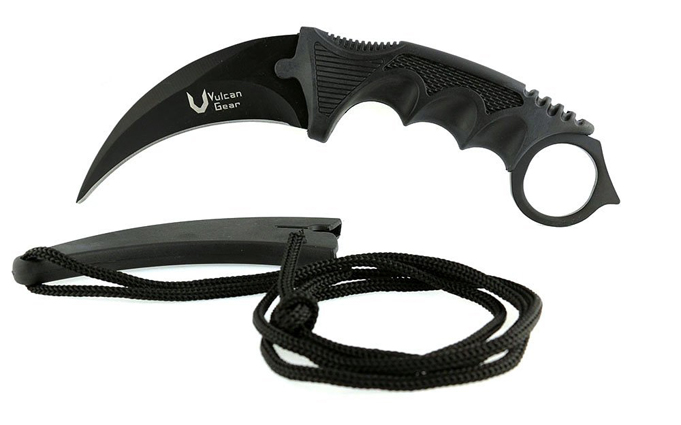 So, why do we carry knives? "To defend ourselves," most of us say. To protect ourselves and those we love from people who might want to hurt us. And that's great. But we usually leave it at that. We don't ever ask ourselves what that means:

What does it mean to carry a knife for self-defense? I don't know why we never ask ourselves this, because the answer is of profound significance. We carry knives because, at some point, we might have to stab somebody with them. To save our life and the lives of the people we love, we might have to end the life of another human being.

And the reason it's important to say that out loud, to confront the reality of what carrying a weapon for the purpose of self-defense is, is because once that's out of the way, we can ask ourselves the next profoundly important question: What the hell am I carrying and why?

Carry A Knife :: THE FAST DRAW

If you carry a weapon and think you're going to use it to defend yourself, you need to be able to get it out quickly. The faster your weapon is out, the faster you can start dealing with the situation at hand. The Colonel draws fast.

Really fast. It draws like a pistol, it sits on your belt like a pistol. You can draw the Colonel using the same draw stroke you use with a Glock 17. It's simple; draw and present. There's no special technique.

Additionally, the Colonel eliminates the need to learn how to hold a knife properly, instead of multiple grips — index finger running along blade, transitions from forward to reverse grip, handle palming, bottle-gripping, etc. — there's one grip: Put your finger in the hole and start stabbing. It's easy to learn, easy to repeat and it won't come out of your hand unless you throw it.

Everyone has a general idea of how to use a knife: Pointy end goes into the bad guy, right?

It's a simple idea, but not necessarily easy to carry out in real life. People can be wary of knives for lots of reasons, but as a combatives instructor we seem to hear the same few over and over.

"I don't feel comfortable using a knife," "I might stab myself," "My attacker might take my knife and use it against me." These are all valid concerns; after all, blade experts train for years just to develop the skills to effectively draw and deploy a live blade without cutting their own hands and arms.

And, in a way, this is the No. 1 reason a large percentage of people don't carry knives:

"It takes a long time to learn to use them effectively. Most people don't have the time to devote years to training. And it takes years."

On the other hand, you don't need to train for years to learn to use a Colonel: Most people only need a day, because the Vulcan Gear Tactical Karambit Hawkbill Knife is based on simplicity. It's designed to mirror the way the human body already works.

Everybody can point, everybody (more or less) can throw a punch. As a result, anyone can pick up the Vulcan Gear Tactical Karambit Hawkbill Knife and immediately know what to do with it. The design is intuitive to the hand: just point and stab. And, more importantly, it feels great in your hand. Once you pick it up, you'll know what to do.

The focus on the design of the Vulcan Gear Tactical Karambit Hawkbill Knife was to make a knife that is accessible to everyone. Men, women, untrained novices, professional fighters — anyone can pick up a Vulcan Gear Tactical Karambit Hawkbill Knife and use it effectively within minutes. Using a knife shouldn't be so difficult or inscrutable that only a small percentage of the population can become effective with it. Defending yourself and your family is far too important for that.

When you hold the Vulcan Gear Tactical Karambit Hawkbill Knife in your hand, the blade runs parallel with your arm, so when you're thrusting at your target, you don't have to turn your wrist, you don't have to do anything. The blade is already pointed right where it's supposed to be headed. The blade is always facing your opponent, not toward you.

This not only gives you greater reach when thrusting, but it also protects your body from your own weapon. When you're dealing with an attacker, you shouldn't be worried about taking more damage from your weapon than your target. The Vulcan Gear Tactical Karambit Hawkbill Knife makes sure that's the case every time.

We believe everyone should carry a knife. You carry a firearm every day? Good. You should carry a knife, too. You don't carry a firearm? You should go buy one, and carry the Vulcan Gear Tactical Karambit Hawkbill Knife as well. You can use the Vulcan Gear Tactical Karambit Hawkbill Knife to defend yourself in a crowd of people and not worry about accidentally shooting the person behind your target.

Hell, you can use the Karambit to prevent people from taking your firearm from you. Wearing and using the Karambit does not detract from any other weapon you carry or any skill set you have. We don't want you to stop doing what you've been doing for years. Far from it.

We wish to provide you with a tool that is designed to utilize the skills you already have to make you even more capable of defending yourself in any situation. And if it can accomplish that, if it makes you just a little bit deadlier, a little bit faster with a knife, a little bit more confident in your weapons system, then it's worth it.