Why Pocket Pistols Don't Measure Up 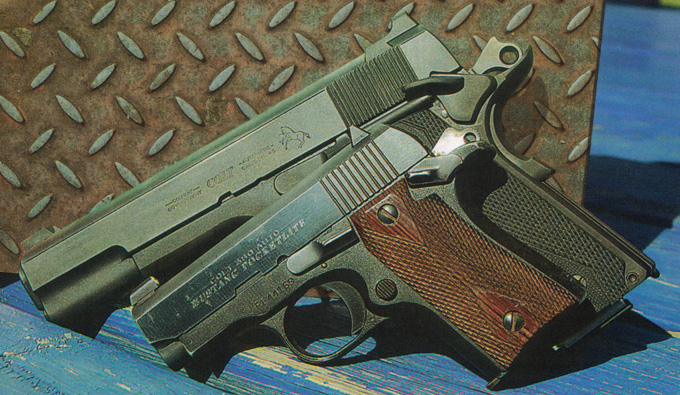 While author is a fan of all things colt, he prefers to carry a 5-inch Government Model instead of its .380

These days you can't pick up a gun magazine without finding an article extolling the virtues of the pocket pistol. The past couple of years have seen a significant resurgence in the popularity of pocket guns. This is not without good reason. Kel-Tec has been producing a solid line of .32 and .380s for years. Ruger has enjoyed big success with their LCP and LCR. Kahr Arms has been producing some great sub-compact pistols in fighting calibers.

During my years in law enforcement, one of my favorite back-up guns was a Smith & Wesson J-Frame that I usually carried in an ankle holster or in a pocket of my uniform pants or jacket.

Once upon a time, detectives were often seen wearing an S&W J-Frame or Colt Detective Special. Carrying that compact gun was considered a badge of office. Today, detectives and other plainclothes officers will most likely be found carrying the same duty pistol issued to patrol or perhaps a compact or sub-compact version of the same.

Off-duty, one might carry those same sub-compact service-caliber pistols or perhaps a J-Frame size revolver, or even still a sub-compact pocket pistol chambered in .32 ACP or .380 ACP.

What I have noticed, at an almost disturbing rate among both off-duty lawmen and citizens who lawfully carry concealed, is the reliance on these .32 and .380 pistols as primary defensive arms and carried in a manner normally reserved for the back-up gun, aka BUG.

We will all agree that many persons, whether suspect or innocent victim, have been shot dead with .22s, .25s, .32s and .380s, but I think we will also agree that these calibers lack the effectiveness of .38+P, .357 Magnum, 9mm, and larger service calibers. Dr. Martin Fackler, Evan Marshall, Ed Sanow and others have written volumes on this subject, so there is no need to rehash it here.

Some of the top-tiershooting schools are now catering to individuals choosing to carry these pocket guns, hosting classes in their use in defensive situations. But today's lean economic times dictate that folks reserve surplus cash for things other than training.

(Left to right) Despite the development of some high-tech pocket calibers, author dhelieves service calibers like .45 ACP, .40 S&W, and 9mm are still superior to.380 ACP and vastly superior to .25 ACP.

I have found that most indoor ranges do not permit customers to draw from the holster, much less a pocket holster. Many ranges likewise only permit you to bench the pistol if part of an organized competition or training event. Even during these events, participants are required to draw pocket guns from belt-mounted holsters. Thus, users are receiving limited or no training in drawing and shooting these pistols from concealment.

The additional factor to consider is the perceived or felt recoil of the pocket pistol. Despite being chambered for .380, I tend to perceive more recoil from a KelTec .380—due to its light weight—than I do from a Glock 27 chambered in .40 S&W or an all-steel Colt Officers ACP in .45 ACP. Shooters must find that balance between the power factor of their chosen cartridge and the delivery platform. 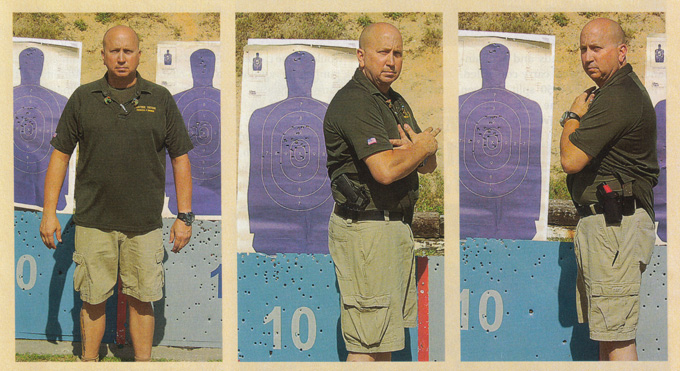 LEFT: Hot and humid climates often dictate light casual dress such as a golf shirt and cargo shorts. MIDDLE: With the proper holster/belt combination, dress does not prohibit author from concealing a 5-inch 1911 pistol. RIGHT: Author also carries a reload of ammunition and Taser C2 for a less lethal option.

I live on the east coast of central Florida, a very humid sub-tropical environment. As I begin penning this, it is 93 degrees with a heat index of 104 degrees and humidity at 93%. Needless to say, this type of weather dictates dressing down and thus may limit our options for concealed carry.

Recently I visited a local gun shop and entered into a conversation with the salesman about the challenges of concealed carry in this climate. I took note that he and I were dressed similarly, in cargo shorts and untucked polo shirts. The clerk shared with me that he had taken to carrying a scandium J-Frame revolver in his strong-side shorts pocket. He related that in the heat and humidity, it was next to impossible to carry anything else. My response was "Really?" I raised my shirt's tail above belt level, displaying a Colt Government Model carried in an inside the waistband holster. On my support side I carried a reload for the pistol as well as a Taser C2. The clerk's eyes widened.

Now, I won't try to make you believe I have never carried a mouse gun or other sub-compact pistol even when weather and dress could have reasonably provided other options. I retired from law enforcement in 2006 and spent abput four years as a manufacturer's rep within the police equipment industry. I often found a Colt Mustang Pocket Lite riding in the front pocket of my Dockers or cargo pants. 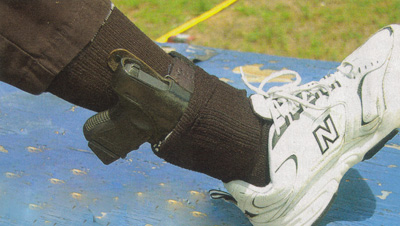 Ankle carry may be an option in an office environment, but inadvertent flashing is also possible. This can be mitigated by donning a second sock to cover the muzzle end of the holster.

I started taking a serious look at defensive pistol choices and the method of carry among friends and acquaintances who routinely carry concealed. I found about a 50/50 split between those who carry some sort of pocket pistol in either a revolver or semi-auto flavor, usually .38, .380 ACP or .32 ACP caliber, and those who carry a service caliber duty-size auto or revolver. One in particular seems to be in a neverending search for the "perfect" carry gun.

Next I noted that among the pocket carry crew, each and every one of them carried a Blackberry or iPhone on their belt. I thought, rather than carrying the pistol in our pocket and the phone on our hip, shouldn't we carry the phone in our pocket and the pistol on our belt? I realize that we're going to use the phone far more often than the pistol and therefore it is more convenient on the belt, but in a critical incident, which would I prefer to have the easiest access to?

I started thinking about caliber and delivery platform preferences. I don't think I will find a single reader of this magazine who doesn't agree that 9mm, .40 S&W or .45 ACP would be the caliber of choice during a gunfight, assuming that we are restricted to a handgun.

I reached out to some instructors whom I respect, one a civilian with an extensive training background, the remaining retired from law enforcement or still on the job. I asked each of them to define a carry pistol by caliber, method of carry, need for a reload, etc, then posed those same questions for the definition of a back-up gun.

Interestingly, back-up guns for the most part were defined almost identically as carry guns, still in 9mm oi larger caliber, on a smaller platform with an option of belt, ankle or pocket carry. Two included revolvers in .38 Special and even .22 Magnum and one a .380-caliber semi-auto. Admittedly 1 was surprised there was no mention ol the small caliber sub-compact guns that seem to be all the rage.

I have conducted a number of interviews with officers involved in shootings. I have yet to find anyone who during the gunfight wished they were carrying a lighter, smaller, less powerful pistol with no sights and a heavy trigger. Factually, though not necessarily practical, each had wished for a shotgun or rifle.

BUCK ON THE JOB

Carrying an S&W N-Frame in .45ACP is not as one might imagine, S&W J-Frame .38 Special is shown for comparison.

In January 2011 I returned to law enforcement with an agency that issues the .40 S&W caliber Glock 22. While my preference is a .45 ACP in the 1911 platform, I cannot argue that the G22 is a reliable piece of gear and the .40 S&W S&W J-Frame .38 Special is shown for comparison. caliber has proven effective in street encounters. For a BUG, I purchased a Glock 27 carried in a Galco Ankle Glove.

In an effort to maintain consistency between my duty and off-duty pistols, I most often find myself carrying a Glock 23 when off the clock. It rides well in a 5 Shot Leather IBS. When situations dictate my dress be a pair of Dockers and a tucked-in polo, I opt for the G27 in the Galco ankle holster.

When teaching the firearms block at the local police academy or conducting in-service instruction at my agency, I remind students that if your primary gun fails or you are otherwise deprived of it, your BUG just became your primary gun. And since your original primary pistol was not in .25, .32 or .380, why should what is now your primary pistol be chambered as such?

Are you ever going to catch me carrying a .380 ACP orsimilar as the only gun on my person? I won't say it will never happen, but it's easier than one thinks to commit to carrying a fighting pistol as a primary carry gun, reserving the small sub-compacts as an "Onion Field" or hideout piece.

I refer to a .380 as the gun I carry when I am not carrying a gun. I find that we often dictate our off-duty pistol based on comfort and convenience. I submit to you that carrying a pistol is not about convenience, but about the commitment to protecting ourselves, our loved ones and other innocents.

One of the polled instructors advised that he might reduce the size of the platform, but draws the line at caliber: 9mm at the least. He refers to his subcompact 9mm as his "Disney Gun." He also offers some sage advice: "Never go anywhere with a gun that you wouldn't go without a gun."

Ron King is a retired police lieutenant from central Florida and has worked as a representative in the body armor industry. Currently he serves as a Sergeant with the Port Canaveral Police Department. He also operates a personal defense and police products and training business and serves as an adjunct instructor for a local criminal justice academy.