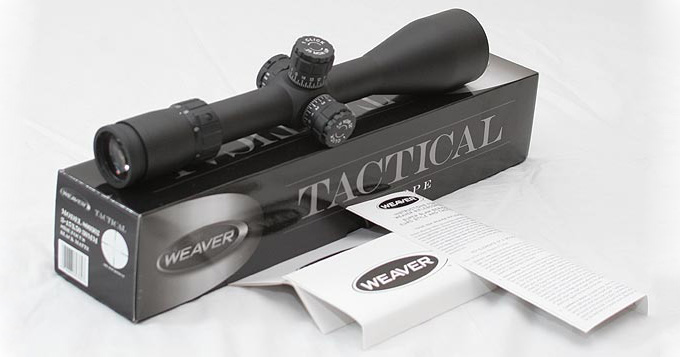 A pair of Weaver tactical rifle scopes have received the prestigious "Member Tested and Recommended" seal of approval from the National Tactical Officers Association (NTOA).

After extensive testing by law enforcement officials, the Weaver 1-5x24 Illuminated Close-Intermediate Range Scope and the Weaver 2-10x36 1/10 Mil Tactical Scope received a score of 4.32 and 4.27, respectively, out of a possible 5.

The two NTOA-approved scopes are a part of the Weaver Super Slam series of tactical optics. Products that earn the NTOAs seal of approval are listed on the associations comprehensive online database and will be included in the organization's quarterly journal. The Tactical Edge.

From close-quarters battle scenarios to extended shots out to 600-plus yards, the Weaver 1-5x24 Tactical Scope s one-piece design gives rugged durability for any tactical situation.

The Weaver optic features a first-focal-plane reticle for accurate, mil units at all magnifications and can be illuminated in red or green.

Features of the Weaver Tactical Rifle Scope are : Waterproof, fogproof, and shockproof, the tactical scope, promises to provide precise shot placement round after round.

From long-range shots taken at high magnification to short-range encounters, an officer can quickly dial down to a low-power magnification for quick sight acquisition on close-range or moving targets. Weaver have found a place with military units, police and SWAT operations around the country. If you're looking for the best tactical rifle scope, it's hard to pass the Weaver for suitability and price.