OPTICS HAVE BECOME incredibly complex, especially considering the popularity of precision and long-range shooting, A lot of shooters enjoy working through the complexities to get to the exact shooting solution. Many don't. Some like to keep work behind the rifle simple and fast.

Shooting should be simple enough to be fun, and anything that streamlines the tasks required to get a bullet where it needs to go is always appreciated. Weaver's new multi-stop Grand Slam scope is an optic that makes life for the shooter so easy a caveman could do it.

The heart of the new Grand Slam is the turret system. The turret has a zero stop that allows the shooter to always know where the rifle is zeroed. Setting it will require opening the owner's manual, but once done, turning the turret clockwise until it stops returns the rifle to its zero.

The "MultiStop" refers to the opportunity the elevation turret gives the shooter to emplace colored bands at preferred settings, such as known distances. There are about 18 minutes of elevation per revolution of the turret with the zero stop set.

As an example, the shooter could emplace the white band at zero and then use the remaining seven colors at every 100-yard increment out to about 800 yards, depending on the rifle cartridge sitting under the scope.

ABOVE LEFT : With the cap removed, its easy to place the colored pins in the desired locations.

ABOVE RIGHT : The elevation cap covers most of the pins but leaves enough color visible to dial the turret correctly.

There are multiple stops in each color, so the shooter can place as many or as few as they want. My preferred setup is a stop at my 100-yard zero, at 200 yards, 300 yards, and then every 50 yards after that. In order to know where to place the stops, a shooter can either use a ballistics program or shoot their rifle at the desired distances. 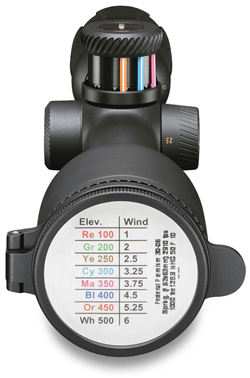 Weaver has a ballistic program on their website that works well with this scope. It requires the shooter to know some specific data, such as ballistic coefficients and muzzle velocity, if not using Federal ammunition.

The turret is marked in minutes, and thos e markings are visible after removing the elevation turret cap. Placing pins at known subtension points isn't difficult. The spots to place pins are every half-minute even though the scop e dials in quarter minutes. Worst case, the pin is a quarter-minute away from where it should be. At 800 yards, that's 2 inches, which isn't a big deal.

The Weaver ballistics program even has the option of printing off a round range card that sits inside the objective lens cap (the one at the far end of the scope). I wish more folks would follow Weaver's lead on this. The print on such a range card is small but so much easier to see if it's 15 inches in front of our face instead of 3-1/2 inches.

The objective lens cap has a clear plastic lens that screws down on top of the actual cap, which is held closed with a small magnet. Once open, the clear lens faces the shooter, so the range card beneath is visible. All the range card has is a color with the distance next to it, so the shooter simply turns the turret to the correct color and fires.

Weaver's scope gives the shooter a simple solution for accurately engaging targets past a couple hundred yards. The scope offers all the excellent performance associated with the Grand Slam line while simultaneously introducing a turret system that allows for simple and uncluttered use out to several hundred yards.