With a fine reputation for accuracy, Walther of Germany are well known for their quality range of air rifles and target small-bore firearms. The same can be said about their target pistols and full range of handguns, in fact 007 won't use anything else but his Walther. Relatively new to the Walther line-up however, is their Walther Pro range of lights. This line-up incorporates everything from a key ring light and small pocket lights, to headlamps and larger utility lights.

Next, they have also introduced a high-grade range of knives referred to asthe Walther Pro Knife series thatfeature 12C27 Sandvik steel with G10 handles in fixed, folders and even multi-tools. To compliment their fine range of firearms and knives, Walther recently released their Pro Universal Gun Care, which comes in a 50 mil. Oil bottle or the choice of a 50, 100 or 200 mil. spray can. Offering an all-in-one lubricant, solvent arid rust inhibitor, it will clean barrels and receivers and is equally at home for use on any metal parts and even plastic or wood. 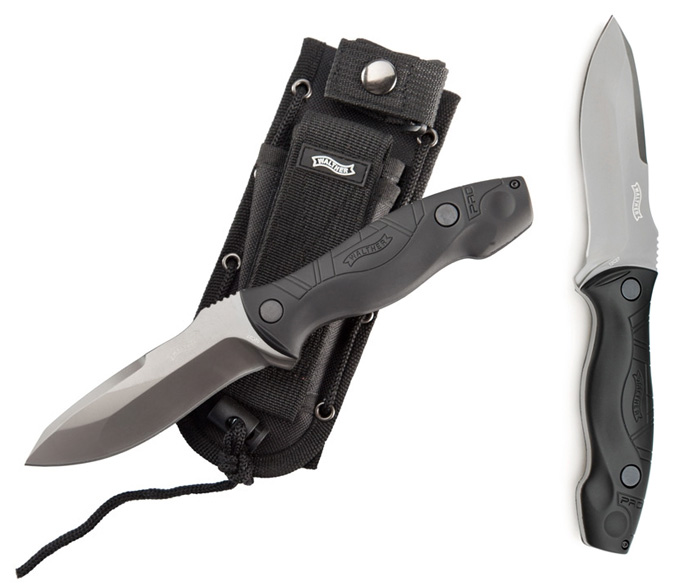 One of the most useful tools in a hunters kit is a good knife, and which one you choose will depend upon what you intend to do with it. Knives can be used for everything from skinning and dressing out game to ones that might ensure your survival in a tight or dangerous situation. All of the Walther Pro knife blades are made from 12C27 stainless steel — this is produced by Sandvik, one of the leading Swedish steel manufacturers and well known to blade enthusiasts around the world. The handles are formed from G10, claimed to be indestructible, with a non-slip rubber coating which I found that even with slightly sweaty hands lived up to that promise.

The first knife that I examined was the model FBK (Fixed Blade Knife) Pro. This features a thick 109mm fixed blade with the tang having the same thickness right through to the rear. The spearpoint blade is finished with a titanium grey colour and has a grooved thumb rest where the metal meets the handle. At the non-business end of the knife is an integrated lanyard hole. This knife looks tough enough to dig a fox hole with, and being 235mm in length with a weight of 254g is certainly a solid unit. The blade was sharp enough to shave hair off my arm as issued.

The FBK also comes with a nylon sheath which features an additional pouch which would be useful for storing a sharpening stone or perhaps a miniature torch (see later). The pouch is cunningly designed to have belt loops that will allow the knife to be worn either vertically in the normal position or horizontally if desired.

Next up was the TFK 11 (Traditional Folding Knife) which featured a 78mm spearpoint folding blade 177mm in overall length but a mere 126gm in weight. The perfect 'pocket knife' dimensions one might say. It looks like a junior FBK at first glance and has the same grey finished stainless blade and an integrated lanyard hole. There is no way this blade is going to close accidentally, as it requires a sturdy push on the integrated release bar to fold it away. As with all Walther Pro Knives, a nylon pouch is supplied for carrying this knife on your belt.

The next item was the Tool Tac Pro M - a multi function tool with 12 functions available. Like the knives mentioned above, the steel is 12C27 from Sandvik and the hand grips are rubber coated G10. The blade length is 57mm and the whole unit is 157mm in length when folded up. At 187g it won t weigh you down either. The pliers are springless, meaning you have to open and close them manually (no big deal) and they include a wire cutter between the jaws.

Other useful tools are the two blades with one plain and one serrated and they are both very sharp! There are also tools that contain screwdrivers, files, bottle openers, can openers, and even a belt cutter. The Tool Tac. Pro M comes with a nylon pouch that can be worn on the belt in the vertical position.

A torch, a flash light, call them what you like but they can be one of the most useful items that you can own. No one really thinks about it until the power goes off, or you drop something in a dark place, or the car stops for no reason and it is after dark. Torches (that's what I call them) come in all shapes and sizes, so here are a few to consider. 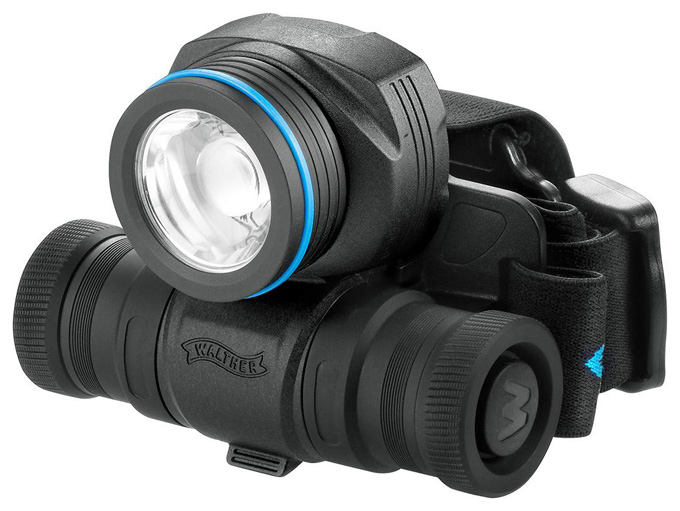 The HL17 is actually a head lamp, an item most people would be familiar with. Headlamps have become more and more popular especially with fishermen and tradesmen who work in roofs where some light isrequired, but both hands need to be free. I have also seen them used by joggers, cyclists and even grape pickers who work into the night. It is also handy when spotlighting and having to walk out and pick up game such as rabbits, etc.

The HL17 LED headlamp has a lens diameter of 28mm and can illuminate a wide area with the lens housing retracted. Pull the sliding focus forward and it becomes a more compact beam of intense light. This is a one handed operation for ease of use. The light beam also features a 90 degree tipping mechanism, to suit any use, or to align the light beam so that wherever you move your head the beam is exactly where you are looking.

Constructed from aircraft grade aluminium and reinforced plastic it weighs in at 175gms.

The HL17 is powered by three AAA batteries with a claimed run time of 3.5 hours on full power and up to 18 hours at the 10% selling. Even ai the 40% setting it will give nine hours. An adaptor is supplied to be able to use 2 x CR123 batteries or one 1CR18650 rechargeable. 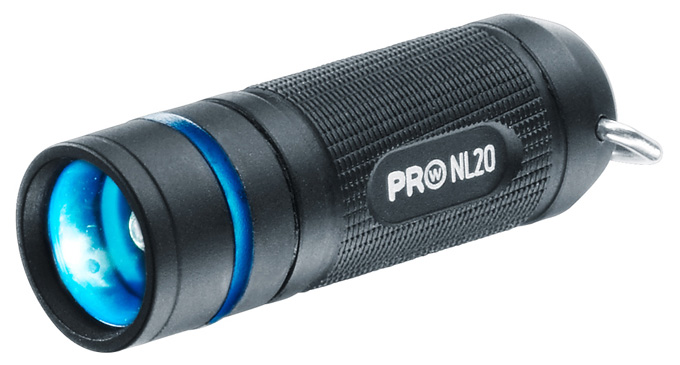 The Walther Pro NL20 is smaller than your little finger - it is 45mm long, 15mm in diameter and weighs in at a mere 8.7gms. It is powered by for AG 13 button batteries, with a run time of 60 minutes. It is encased in an aluminium frame which is claimed to withstand a 2 meter drop, and is waterproof. It has a key ring built in which is a handy feature, and could be attached to your car keys, etc. It may be small but with a 20 lumen beam it is quite impressive, and is just the thing for finding key holes in the dark.

This compact torch puts out a remarkable 935 lumens on full power, but is a mere 143mm in length and weighs in at 142g. It has a sliding focus via the front housing which adjusts the beam from wide to narrow and intense. If desired, by clicking the on/oft switch you can run on 40% or 10% strength and these give 365 or 90 lumens respectively. Run time will depend upon the power output selected and goes from 1.5 hours at 100% to 4.5 hours on 40% and 10 hours at 10% - your choice! It also features a Tactical Defence Strobe, which is designed to confuse and disorient an attacker - just hold the on/off switch down for a couple of seconds and it will activate. There is also an electronic temperature control which prevents the LED from overheating.

The battery is an ICR18650 lithium-ion rechargeable, and the kit comes with a charging cradle that can be plugged into a 240 volt AC, a 5 volt USB port, or even a car cigarette lighter socket. I really liked this torch as it will fit comfortably in the pocket and can get a boost from the cars lighter socket.

This is the granddaddy of the Walther Pro Lights. Yes, it is big at 310mm in length and weighs in at 885g, but oh my, what a light! It puts out a hefty 2200 lumens at 100% setting, 880 lumens at 40% and makes 220 lumens at 10%. At the front it measures 90mm, but the back end is 39mm. The casing is the usual aircraft grade aluminium. The secret of its performance is the seven (count them) high powered LED's which are focused to deliver a beam that is claimed to be effective to 325 meters.

The usual three power levels (as mentioned before) are available and run times are 3.5 hours, 10 hours and 36 hours respectively. This performance is due to the battery pack which consists of two ICR18560 Lithium rechargeables. Recharging is a simple matter - undo the captive end cap and plug in the supplied charger lead from a 240 volt source. Four blue LED lights will indicate where the charge issitting. Because of the weight of this light, a carry strap and two fixing rings are supplied and this would allow the light to he carried at waist level during say, security work. Speaking of which, the Tactical Defence Strobe produces a blinding light pattern which is extremely unpleasant to look at, even from 20 meters - yes, we tried!

We took this light out spotlighting, and it impressed the heck out of everyone who saw it in use. Our usual spotlight which is a popular brand 240 series paled into insignificance.I am unsure of the temperature rating of this light but it would be at the higher end, as the light is an intense white.

There is some really quality equipment here, both in the knives and the torches. Yes, you can probably find apparently similar gear at a lesser price, but always remember that quality costs a bit more for a reason. All of the equipment tested performed flawlessly, and did exactly what was claimed of them. Check them out at your gunshop and compare prices for the best deals around. Rechargeable batteries to suit the above are available from a number of suppliers on the internet.

Anything metal that you use outdoors is going to be prone to rusting and corrosion - that's an unwelcome fact. How to prevent it is another matter, and you need the right inhibitor applied correctly to the items exposed to the elements. Walther pro have produced two series of gun care products - these are Walther Pro Gun Care and the Gun Care Expert Series. Both are manufactured in Germany.

The Gun Care Series is claimed to be a lubricant, solvent and rust inhibitor and is available in 50ml liquid form or as a spray in 50ml, 100 ml and 200ml pressure pack cans.

I personally like the liquid form as I can apply it using a rag and get just the right amount onto the metal surface. I have found with most sprays that you either get a little or a lot, and if it isthe latter then it has a habit of getting into bedding areas and other places where it shouldn't be. However, if you are careful then the spray is OK. It would appear that this product is oil with some sort of solvent added - it has an unusual odour, a bit like fly spray I thought. It did spread evenly though, and a piece of metal left out in the weather for about a week showed no sign of rust or corrosion on the treated part.

The Expert Series is more designed for the weapons of those who go in harm's way, and has been laboratory tested to operate between temperatures of -50C to +210C. It puts a non-greasy film on the metal surface which does not attract the usual dust and grit. It can be used on wood, metal and plastic without harm. I tried it on a well used wooden stocked rimfire and it certainly made it look a whole lot better. Treating a piece of metal and leaving it outdoors for a week showed no sign of rust or corrosion after some fairly ordinary' weather had hit it. The Expert Series is available as a liquid of 50ml, and as a spray in 50ml and 100ml pressure pack cans.