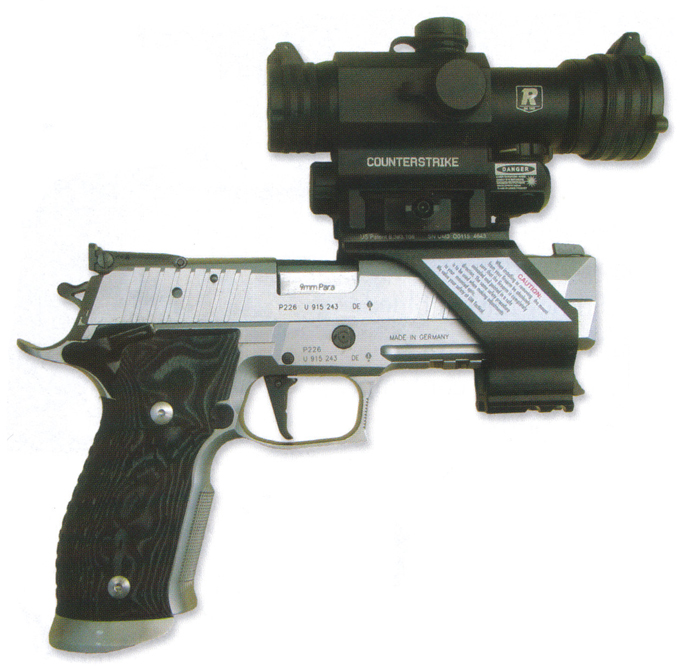 The latest edition to the UM Tactical includes a carbon fibre Blade-tech holster that is designed to attach to the UM3 scope mount in the kit, so any autoloader that fits the sight mount will fit in the holster.

The UM Tactical people have created a sight mount, manufactured from aluminum alloy with Mil-Spec grade anodiscd finish, that fits any handgun with a 1913-type Picatinny rail.

These rails are machined into the pistol frame in front of the trigger guard and are standardised for the fitting of accessories such as tactical lights and laser aiming devices.

I had no appropriate rail-equipped handgun in my collection, so recruited John, a pistol club member, to try the UM Tactical mount in his SIG X5 9mm auto.

Coincidentally, he had purchased a similar rail mount for his SIG but it had a couple of problems. 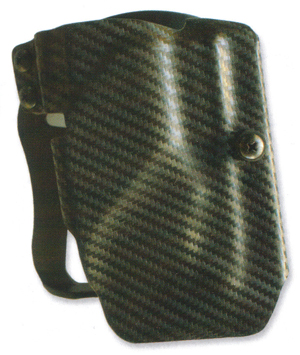 The Bladetech carbon fibre holster home with the UM Tactical Mount and is designed to lock on the mount rather than the pistol, making it very versatile.

One being that there was not enough clearance inside this mount to clear the top of the slide, and the main problem was that the mount could not be moved far enough forward on the rail for the right-hand leg to clear the ejection port.

The UM Tactical mount had no such problem, and as the instruction implied, it clamped securely in place half a minute. I fitted a Redfield Counterstrike sight to the rail to give it a test run.

The Counterstrike is a big and bulky sight that has both red dot and laser aiming facilities, and would probably not be the first choice for a serious IPSC competitor setting up a pistol for the match.

However it was fairly heavy and we thought it would be well suited to test the robustness of the UM Tactical mount review I was supplied with.

John put several magazines of his 9mm handloads through the outfit without any apparent change in point of impact, and after the session was over, the mount with sight attached was removes just as quickly as it was installed.

The UM Tactical Mount locks on the rail under the frame and clamps to the frame with the upper screw. The bulky Bushnell Counterstrike sight is not ideal but it was a good test for the mount.

The UM Tactical kit — holster and mount has a recommended retail pricc of $220 - very good value for high quality out of the box performance. The UM Tactical Holster review was fairly simple, it performed extremely well as designed.

Another small item included with the UM Tactical gear was a set of Talon adhesive non-slip grip covers.

Talon grips are available for over 100 handguns from most major manufacturers. They help "personalize" your pistol grip.

The Talon grips are designed to stick over existing polymer grips and are precision cut to fit each type of pistol, with opening for the magazine release and other operating components in the grip area.

The grips are coated with what feels like the equivalent of about 80 grit abrasive paper - assuring when the adrenaline is pumping sweaty hands stay solid and slip-free.

The black abrasive is attacked to a flexible pre-glued backing. Removal of the wax paper from the adhesive is all that is required to prepare the grips for adhesion to the handgun.

An alcohol pad is included in a sealed package to allow the plastic, grips to be cleaned a degreased prior to attachment of the Talon grip.

Again, I did not have a Glock to try these grips out, but handling the surface is a very good indication that non-slip will be guaranteed.

These Talon Grips are a very reasonable $35 investment for sweaty hands and polymer grips.