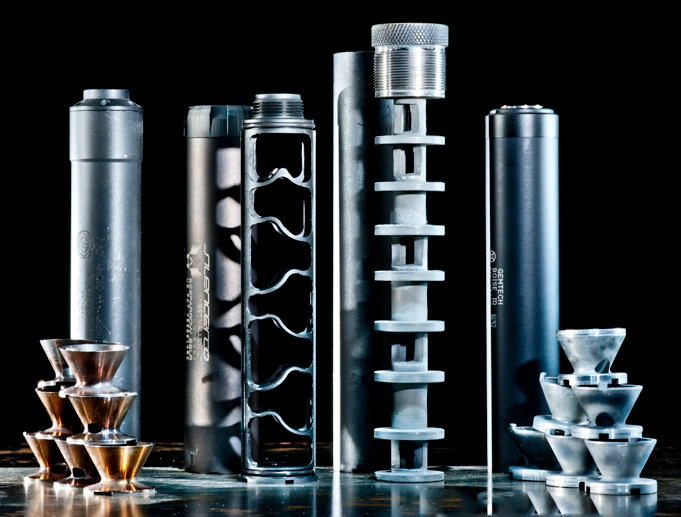 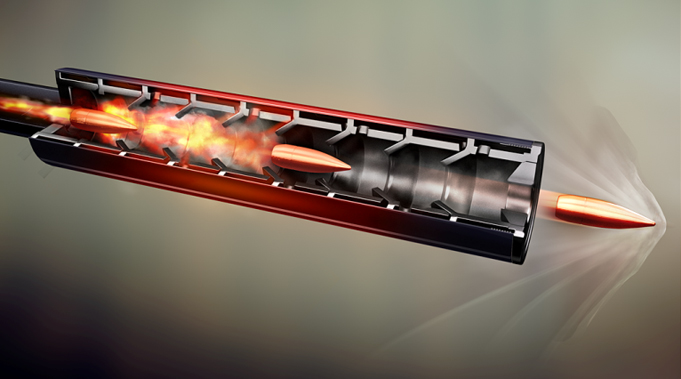 Some people still envision sound suppressors as those little black tubes secret agents install on guns in movies. But suppressors, silencers, cans - whatever you want to call them—are legal to own and hunt with in most states after obtaining the proper paperwork. And the benefits of suppressors are many: less hearing damage, less angry neighbors, less flinching from recoil. So read on to see what new suppressors are hitting the market for 2016.

Ruger's first entry into the suppressor market is the Silent-SR, which is made for rirnfires in .22LR, .22 WMR and .17 HMR.

The Silent-SR is made with a titanium tube and an aluminum rear cap while the baffles, mount and end cap are stainless steel.

The Silent-SR uses six tightly fitted, snap-together baffles that keep lead and camon away from the tube to make disassembly easy without fouling cementing the parts together.

The SRD762Ti-QD is a Grade 5 titanium sound suppressor using a Fast-Attach muzzle device for mounting the silencer to the rifle.

The rear mount has wrench flats to torque the silencer to the muzzle brake. There is a secondary retention latch that is depressed to remove the silencer from the mount.

The SRD762Ti-QD is rated for use up to .300 Winchester Magnum, and it comes with a Taper-Lok muzzle brake with 5/8x24 threads, matching the vast majority of modern sporting rifles in .308 Winchester/7.62mm NATO on the market today. Other muzzle devices are also available. (sigsauer.com; 603-610-3000)

The Illusion 9 was designed to be low enough to allow for the use of factory-height sights (exception being the Beretta 92/M9 series).

This unit is also user serviceable. It is constructed with a stainless blast baffle and seven aluminum conical baffles wrapped in a 6061 aluminum tube with a hardcoat anodized finish.

This year SureFire offers a modular version of the very successful Ryder 9 Ti that was introduced in 2015. The SF Ryder 9M allows 9mm pistol and carbine shooters to use a full-length or short version of the suppressor when needs dictate a different length or desired sound reduction.

The Ryder 9M is 7,9 inches long and weighs 11 ounces, while unscrewing the end module brings the length and weight down to 5.9 inches and 8.5 ounces. At only 1.25 inches wide, no special high-profile sights are needed on the host pistol.

The Ryder 9M uses a titanium tube and end caps coated in grey, black or Flat Dark Earth Cerakote. Inside, there are five heat-treated stainless steel baffles and one spacer that are numbered and notched for correct and quick reassembly after cleaning.

The unit is sold with an assembly/disassembly tool that easily removes and reinstalls the baffles as a single-stacked unit, (surefire.com; 800-828-8809)

The Ghost-M can also handle full-auto fire (semi-auto in 300 BLK), and you can quickly change its length by unscrewing the forward section and replacing the end cap. The baffles in the forward section and main body stay intact, making reassembly just as quick. The Ghost-M is made with a titanium tube and 17-4 stainless steel baffles and end caps. Its weight varies from 9.6 to 12 ounces. (deadairsilencers.com; 877-892-7544)

Gemtech's new Tracker suppressor is designed for hunters who want a lightweight (11.3 ounces) and reasonably priced suppressor. Its MSRP of $599 makes it Gemtech's lowest-priced centerfire suppressor. 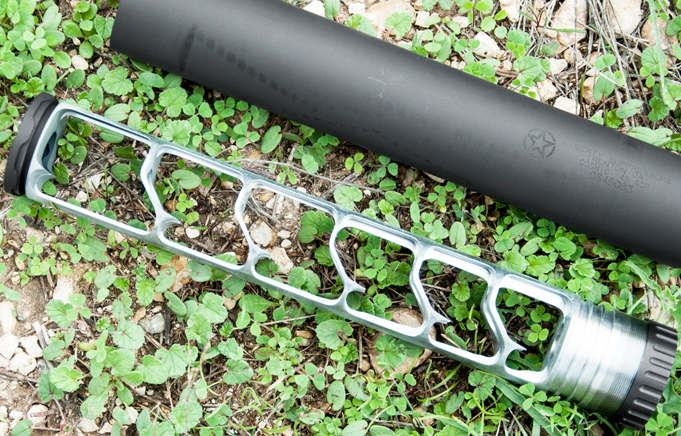 Liberty's versatile new Cosmic suppressor is a great choice for a first-time suppressor buyer who wants to buy only one suppressor and use it on several different firearms.

The Cosmic can be used on pistols.up to .454 Casull and rifles up to 5.56mm. Notably, the list of pistol calibers that can be used includes the 10mm and several magnums, including me .44 Mag and .400 CorBon.

To handle these high pressures, the Cosmic uses a stainless steel monocore and a titanium tube finished in Cerakote, and it can be disassembled by the user for cleaning. It is rated for moderate full-auto fire in pistol calibers. The Cosmic is 8 inches long, 1.38 inches in diameter and weighs only 9.5 ounces. (Iibertycans.net; 706-661-6911)

Troy has added the 5.56 Quick Attach M7 Suppressor to its existing suppressor line. The M7 can be purchased in short or long configurations and are constructed of 17-4 stainless steel for durability and corrosion resistance.

The M7 QA Suppressor kits come with a three-prong flash suppressor with mount that easily installs onto the threaded barrel of the host weapon. 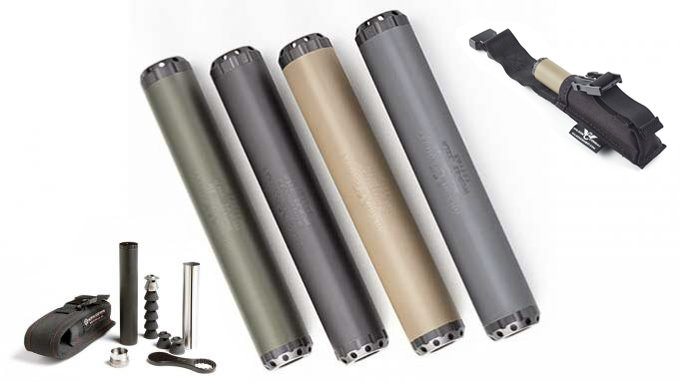 The newest Wilson Combat suppressor MACHINE NITRO is the WCR-22, which is a durable rimfire suppressor that can handle full-auto .22 LR and .22 WMR calibers.

It's made with a 7075-T6 aluminum monocore, a stainless steel thread mount and a titanium tube. It has a 1-inch diameter, a length of 6 inches and a weight of only 4.2 ounces. This suppressor comes with a wrench to remove the core for cleaning and a nylon belt pouch.

Five colors of Wilson's own Armor-Tuff finish are available. Applying Armor-Tuff is a multi-step process with a resulting finish that Wilson has tested and believes offers superior performance to other thermally cured finishes in several areas, including abrasion, corrosion resistance and lubricity. (wilsoncombat.com; 800-955-4856) 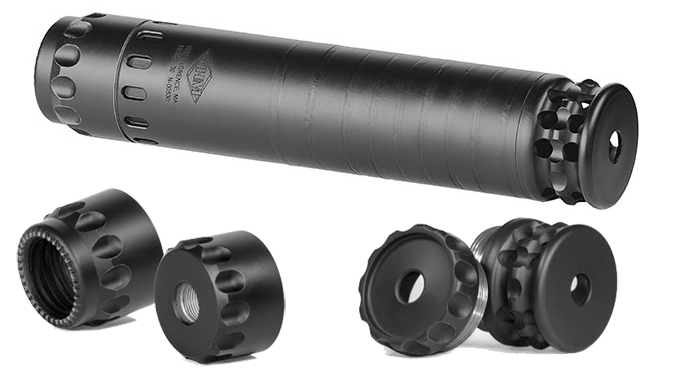 Yankee Hill Machine (YHM) makes rifle, pistol and submachine gun suppressors. For 2016, the company will offer the new Nitro modular suppressor that can be used on a wide range of calibers from .17 HMR to .300 Ultra Mag.

The Nitro is configurable for different calibers by changing end caps for better sound reduction, and it can also use either a direct-thread or QD mount. 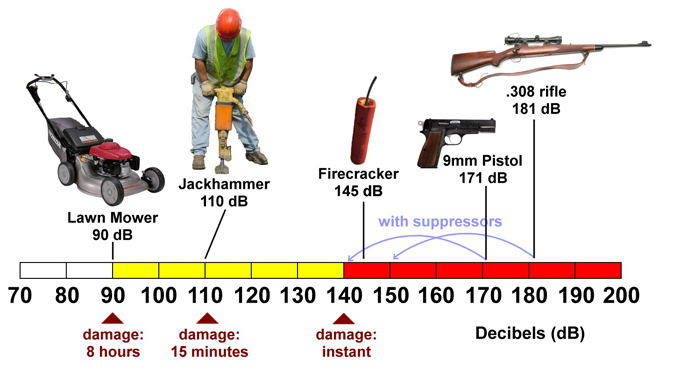