To Protect And Serve 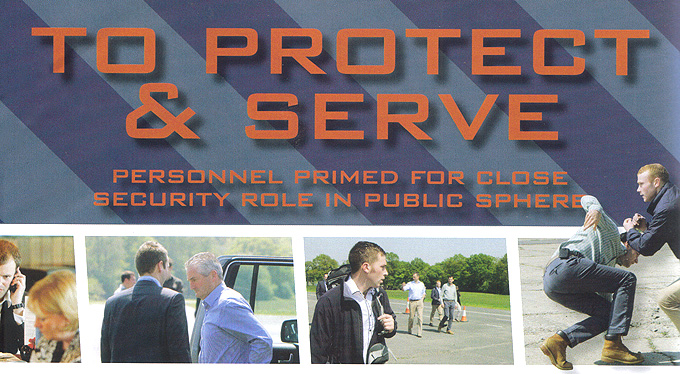 WITH Army training packages often conducted in the vast expanses of Salisbury Plain or Norfolk's wooded countryside, it is surprising to see soldiers being put to the test in the lobby of Reading's Hilton Hotel.

But the grand setting has been used to ensure the Service's next generation of close protection personnel are fully up to speed when it comes to guarding ministers, senior military officials and diplomatic staff on global deployments.

Tasked with providing 24-hour security for a fictitious VIP, students from the Royal Military Police escorted the high-profile figure to a simulated media interview at the venue as part of a thorough five-day exercise.

While this might sound mundane and simplistic, the reality is anything but.

An advance party provided a thorough check of the route and building prior to the guest's arrival, before the security detail immersed itself in the hotel environment with a keen eye for anything out of the ordinary.

On this occasion the scenario passed without incident as the interview ran to schedule and the VIP departed after lunch.

Assignments such as these are a daily occurrence for the Close Protection Unit and aspiring members learn the tools of the trade during an eight-week training programme that covers everything from advanced shooting to tactical driving.

"It has been quite intensive from the start," student Cpl Sean Holderoft (AGC (RMP)) explained. "There are a lot of physical aspects to the course, the PT and training exercises are demanding, but it is very good.

"Close protection is the shining star in terms of jobs we can do; it is the light at the end of the tunnel.

"It is another string to the bow and it gives us an opportunity to go to places like Malawi and the Lebanon, rather than deploying to Afghanistan for six months in every 24.

"I would thoroughly recommend the course to anyone who is considering taking part. We have been studying for two months and I now want to do it for real."

With the theory complete, personnel honed their new-found skills on Exercise Watchtower, a challenging confirmation package that is conducted in the public domain to test students in a realistic and demanding environment.

After seeing the Hilton scenario reach a peaceful conclusion, Soldier witnessed the other end of the spectrum as the serial moved to Dunsfold in Surrey - home of the Top Gear test track.

As the VIP was escorted to a meeting the group was attacked by enemy fighters, which prompted return gunfire, a swift retreat and a high-speed vehicle escape.

The two scenarios varied in extremes but instructor Capt Jim Devenney (AGC (RMP)) said they were a strong representation of what students could face out on the ground.

"Close protection can be required anywhere in the world, including Afghanistan, for senior military officials, the Foreign and Commonwealth Office and as part of high-readiness teams," he added.

"Those involved are required to deliver protective security to facilitate the VIP's lifestyle on a 24-hour basis.

"One of our key objectives is deterrence. Proper preparation and a strong security pjan can defeat the threat before it occurs.

"That is a huge part of what we do; it's not just a case of shooting and driving." The officer has first-hand experience of the role having deployed with the Close Protection Unit to both Kabul and Haiti.

"I had to extract an ambassador from an assassination attempt on my first day in theatre," he recalled.

"The only experience I had to draw upon was the training I had been given, but it held me in good stead.

"Such incidents are few and far between and I like to think that the preparation and planning we do is a strong deterrent. I am sure there have been a number of proposed attacks that we will never know about." Fellow instructor Cpl Darren Edmunds (AGC(RMP)) added: "I've been awa all over the world including the obvious places like Iraq and Afghanistan.

"The programmes are always busy but the chances of actually being required to act are fairly minimal. "We want to achieve a professional image and we set our standards very high.

"If an y potential enemies are watching, our actions can serve as a discouragement. The fact we do not get called upon that often is a testament to the service that we provide."

The training course runs four times a year and on each occasion its make-up is altered to avoid repetition.

Scenes range from low-level civil unrest and protests to small arms attacks, and previous serials have even seen security teams accompanying VIPs on trips to a tennis tournament at the 02 Arena, a Peter Kay gig and the London Eye.

"We have good links with local constabularies who allow us to carry out this training in the public arena," Capt Devenney said.

"We choose high-profile locations but the support we receive is overwhelming. That helps to create a certain level of realism. "Every exercise has a completely different scope and the students don' t know what to expect.