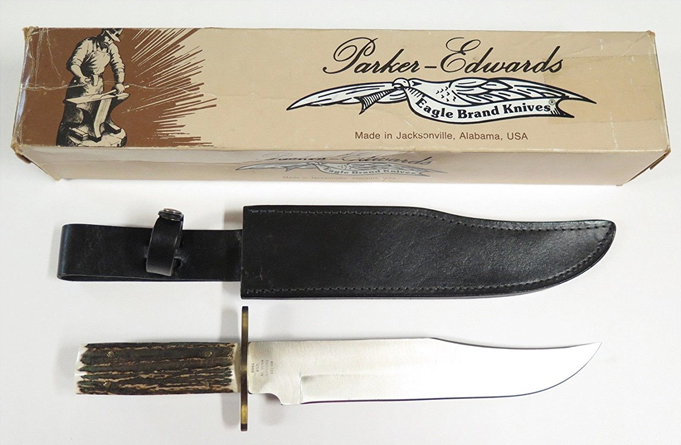 Will 512 layers Of Damascus Steel Stand The Real Test?

On a warm sunny day in early November, at a little blacksmith's shop in Jacksonville, Alabama, a few men put their 15 inch Aregos Bowie through a torture test trying their best to maim it, at least to break it, if not that, disfigure it.

First they started by taking severe chops from burly Randall's arms and chopping into five inch oak pieces. After that, they picked up a nearby 2x4 thinking, "Ah, maybe this will knock off that edge." After cutting the 2x4 down to size and finding this knife still had it's razor sharp edge, they went to the 55-gallon metal barrel.

Danny, Randall's helper said, "I know that edge can't hold up after cutting all this metal." Well, they slashed it into the barrel, plunged it into the barrel. As you can see, after all this, Danny raised his pants leg, exposed his leg, and Aregos went to work shaving it.

After that, they said, "Well, let's see if this 512 layer Damascus Jim Parker puts out will stand the real test." So, they took the 8 lb. hammer, drove the bowie first into the oak log, and both of them, with all their might, pulled it to see how bad they could bend it and twist it, and just how far.

You see, they got it at over a 90° angle and the blade sprung back; never separated, never yielded. Then they drove it again into the side of a tree. First one, then the other climbed on the bowie and jumped up and down, hoping they could break it or at least bend it to where it was disfigured and couldn't be used as a trusted knife. After trying for several minutes, they gave up. 512 layers of Damascus steel was tougher than all three of them. The knife would still slice through paper, ropes, and shave hairs off arms and legs, whatever.

Randall Gilbreath, knifemaker and member of the Knifemaker's Guild has turned out many custom knives and says this Damascus Steel is one of the best metals he has ever worked with.

He is now employed by Parker-Edwards Cutlery Company in Jacksonville, Alabama. He bench makes the models like the Aregos Bowie; also, his custom fighter knife and other models that we will introduce in the near future.

Randall won't put a knife out unless it's good enough to put his name on. That's why today, you can purchase these two knives, the Aregos Bowie and the Gilbreath Fighting Knife from your local dealers, or have your dealer call Parker Cutlery in Chattanooga, Tennessee.

Parker-Edwards is proud to manufacture their knives in America and they have 75 people employed now who are equally proud. The production they are turning out is as good as any you will find — and made by Americans in Jacksonville, Alabama.