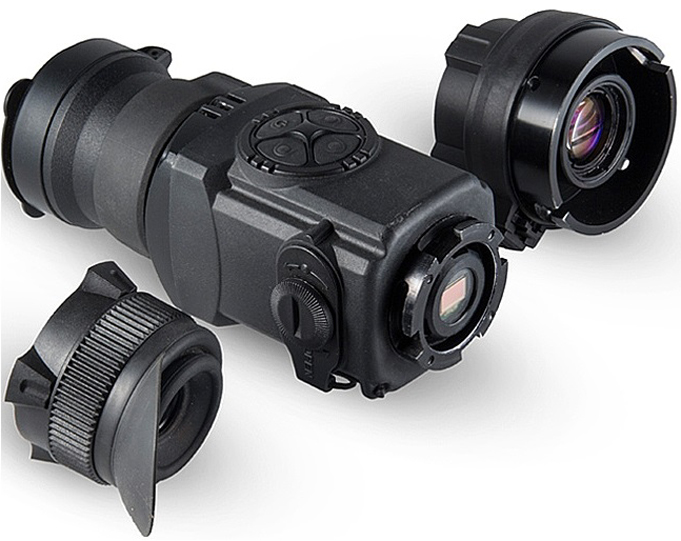 Will effective and convenient night vision (NV) systems, such as Core, become a 'game-changer' for American shooters and hunters?

They have the potential to tip the dark of the night significantly into the NV equipped shooters favour, so much so that if hunting implies a sporting chance for the hunted, the Core FXD50 may be better described as a night time harvesting or eradication tool than a hunting aid.

Progress in the effectiveness of the hunter's night vision equipment, along with other electronic equipment in navigation, distance measurement, communication etc. is improving in leaps and hounds. (It is an interesting contrast to the development of the hunting firearm, whose progress has plodded along steadily for over a hundred years now.)

The European technology company Pulsar is currently setting the pace with their latest thermal imaging night vision offering for shooters, the Pulsar Core FXD50 is now for sale direct to the public.

The Core FXD50 is a significant leap in the progress of civilian night vision, not because it has any particularly exclusive component but because it combines the best available components into a compact, lightweight, versatile and easy to use package. It can operate as a stand-alone night vision monocular or quickly convert the rifle's daytime scope into an effective night vision scope rivalling many current military night vision devices.

There are many uses for the Pulsar Core FXD50 in agriculture, wildlife management, 'search & rescue', military and police operations etc. However, most readers including yours truly are going to be interested in how it performs in finding game and its ease of application and effectiveness as a scope attachment for night hunting and pest destruction.

This latest technology thermal imaging combination enables anyone to spot game at night without the restrictions associated with carrying a rifle. Alternately, if we fit an optional adaptor to our riflescope, we can quickly replace the eyepiece and attach the Core to the adaptor, effectively converting the shooter's daytime scope it into a NV scope. (There are prerequisites for a suitable scope with respect to magnification, mounting height and objective-bell diameter to be looked at later.) Other features vital to its practicality are the compact size, (easily carried in a pack or pocket) its relatively light weight and the clever assembly/disassembly system which is fast and requires no tools.

The Core arrives assembled in its monocular format.

Attaching it to the scope takes seconds rather than minutes and gives the user a robust sighted in night vision viewing or aiming device that is not affected by strong light and functions equally well in total dark, daylight, fog or mist.

A wireless remote control unit is included with the Core. It operates the frequently used image calibration, on/off switch and colour inversion features and it is particularly useful when using the monocular on a tripod to view a fixed area or when attached to riflescope.

Remote use avoids most of the button pressing on the Pulsar Core FXD50 thermal unit leaving it and of course the image stable and undisturbed by unintended movement as well as allowing both hands to remain on the rifle for full control. The Core can operate between -25°C and 50°C, its software can be updated and operates on two CR125A batteries. Image quality is high, enabled by Increased Recognition and Detection Software (IRIS technology).

Although there is no signal output jack on the Core unit, video recordings can be made by direct attachment of a camera.

In the Core a Germanium lens focuses the infrared radiation onto the microbolometer or sensor, which sends its information to the signal processor, which converts it to a visible format to be suitably enlarged by the eyepiece lens for monocular use or the scope of the rifle in attachment format.

Calibration of the Pulsar Core FXD50 plays an important part in producing a quality image. It levels the background temperature of the microbolometer thereby effectively deleting any residual image and image flaws. Calibration can be set up as manual, semi-automatic or automatic.

Image brightness and contrast are adjustable via the four-button control centre prominently placed on the top of the Core unit. There are three selectable operating modes to enhance the image over various backgrounds.

To enable the night vision Core unit to convert your favourite hunting rifle into an effective night hunting rig, the scope and its mounting must be compatible with a Core cover ring adaptor. Firstly, the scope needs to have a parallel-sided (cylindrical) fixed objective bell housing, AO type parallax adjusting scopes are not suitable.

Preferred scope power range is 1-4x, ideally a variable. However, Status Bar icons and adjustment settings may not be in the scope's field of vision in attachment mode unless the scope magnification can be reduced to about 2x or below for a sufficiently wide field of view. If attached to a scope whose lowest power is 2x or higher, basic adjustments and setup can be done in monocular mode before attaching to the scope.

A transition piece called a cover ring adaptor' or adaptor' for short, enables the fitting of the Core to a riflescope. There are three adaptor sizes available, 42mm, 50mm and 56mm and their number or model name refers to the objective lens diameter of the scope that they are designed to fit. However the actual fit has to be made with the outside diameter of the scope's bell housing and the only certain way of choosing the correct adaptor is to know the bell housing diameter.

Each cover ring adaptor is supplied with a limited set of inserts to suit the range of objective bell diameters usually found on scopes with the designated objcctivc lens diameter.

As with most generalizations, there are anomalies particularly for the 42mm adaptor. For example, the cover ring adapter labelled 42mm will come complete with a set of neoprene inserts to accommodate outer objective housing diameters of 45.5 to 50.6mm.

There are plenty of 40mm objective lens scopes that will have 45.5mm or bigger outside bell diameter and therefore be suitable for the fitting of the cover ring adaptor marked '42mm'. A compatibility chart in the Core Night Vision Instructions Manual available at http://www.pulsar-nv.com/upload/iblock/3c4/manual_Core.pdf has the full details of cover ring adaptors and accompanying insert sizes as well as all other Core related information. The cover ring adaptor sells separately from the Core with the appropriate set of inserts included.

Fitting of the cover ring adaptor requires extra clearance between the barrel and scope, which can mean higher mounts required nn an existing scope setup. This clearance needs to exist for the front 36mm of the scope objective bell. (This is how far the cover ring will slide onto the scope.)

Precise clearance required varies with each cover ring adaptor and barrel taper. Generally, the centre line of the scope needs to be half the cover ring outside diameter +2 or 3mm above the barrel. Adaptor outside diameters were 64mm, 84mm and 112mm for the 42mm, 50mm and 56mm adaptor respectively.

Once fixed to the scope, the bayonet style coupling of the adaptor will enable quick and easy fitting and removal of the Core without affecting the settings or operation of the scope in any way. Changing the Core from a monocular to a scope attachment is now a simple matter of removing the monocular eyepiece and replacing it with the attachment lens.

The newly formed Core thermal night vision attachment unit is now coupled to the cover ring adaptor on the scopc to convert the sighted in day scope and Core attachment combination into an effective night vision scope. The adaptor can be left on the scope during day hunting as it has its own flip-up lens cover. Alternately, the quick action cam operated pinch clamp of the adaptor makes short work of removing the entire front assembly from the scope.

The Core FXD50 modular package has demonstrated significant advantages over most of its contemporary NV competition.

As a Thermal Imaging (TI) device the Core is able to highlight animals against the background, has zero emission (and is therefore invisible to the game or humans), but it can see' through fog, rain, smoke and total darkness. Animals largely concealed by bushes and high grass were clearly indicated even though their shape was not well defined.

In its main function of differentiating the image of warm-blooded creatures from the background, it is very effective. (This differentiating or highlighting feature is not present in UV based NV where everything in the image is enhanced). In monocular mode the eyepiece lens gives the image a magnification of 2.8x, easily reaching out to a kilometre and beyond for larger animals.

Closer animals are easily recognizable and high image clarity can be achieved once the user becomes familiar with the focus, brightness, contrast and calibration controls. There is a 2x digital zoom for the monocular image but little if anything is gained as there is a corresponding loss of resolution. There is a colour inversion feature for the image but the basic green was found to be the easiest on the eye. The most impressive image feature was the fluid movement achieved by the 50Hz image refresh rate.

Control button operation felt vague at first, unable to feel the switch contact until a technique of vertical fingertip pressing was developed. This resulted in a reassuring, distinctly felt switch movement, larger or higher buttons would be easier to use. Button operation on the remote was good and made on-off switching and frequent recalibration a very easy task.

Everything on the Core appears well made, durable and strong. Mostly made of polymer with metal sections and inserts where needed, the thermal Core unit and lenses are fully waterproof and shock proof. 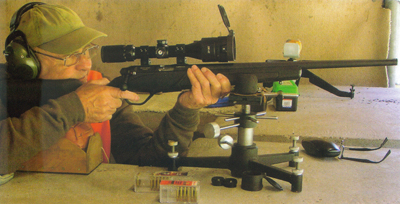 A Craft 1.5-6x 42mm scope with Core adaptor fitted was mounted on a .17HMR and checked for zero in preparation for a fox hunt. This Craft scope is now superseded by the Yukon Jaeger 1.6-6x 42mm. Both are ideally suited to the Core.

When attached to a scope, the cross hairs, plain or with illuminated centre dot, are clearly super-imposed on the image and aiming is as for normal scope use. There is no interference with the scope's zero setting or adjustment system assuring the same day and night vision accuracy.

The Core attachment is relatively compact and well positioned on a rifle, it does not change rifle overall dimensions but adds some forward bias to the balance. It adds 200mm in length to the front of the scope and weighs about 700g including batteries and adaptor.

A hunting rifle with the Core night vision attached simply feels and handles like a heavier barrel version of the same rifle. Changing from monocular to scope use and back is simple, quick and easy. A compact, zip secured shoulder bag carries the Core and related parts and minimizes the chancc of loss or misplacement.

Yukon's Pulsar Core FXD50 is a compact, easy to use and effective night vision system using Thermal Imaging technology rated at Gen3+ in the US system. It can spot game at over a kilometre, be used as a stand-alone monocular or in a matter of seconds it can be on the daytime scope sighting up on game in total darkness.

Easy portability and a tool free change-over and scope attachment makes effective night vision and night shooting without lights possible in a very practical way. The Pulsar Core is at or near the top of current NV technology (that is available for civilian use) as well as being very user-friendly.

The Pulsar Core FXD50 price reflects its eminent position among NV units and it will probably exceed $7000 if a cover ring adaptor is included in the purchase.