Basically, the mission of SOG was to wage unconventional warfare on the NVA's sanctuaries in the countries bordering South Viet Nam.

For political reasons it was necessary to be able to deny knowledge of these teams if problems arose. Because of this,sterile weapons and gear were carried on many operations "over the fence."

In theory, at least, a sterile item can't be identified as to country of origin if lost or captured in the field. One of the sterile weapons, commonly carried by SOG teams, was an unmarked knife known to collectors as the SOG bowie.

SOG bowies were made in small groups by a number of contractors in the Far East. I have been told the original version was copied from a Randall No. 1, but each successive contract seems to have diverged a little farther from the parent design.

Though the basic design had the potential of being one of the better combat/utility blades, our military had issued quality varied from so-so to poor between groups of knives.

The untreated leather, washer handles quickly loosened up under the constant soaking and drying of jungle conditions. Blade grinds were left very thick, almost to the edge, resulting in a knife that didn't bite into a cut well.

Worst of all, the steel used in the blades had a reputation for being brittle. One ex-Special Forces member told of an instance when an issue SOG knife blade snapped when it struck the magazine pouch of an NVA soldier.

The majority of SOG knives were issued to SOG's indigenous personnel and most of these troops didn't have the option of obtaining something better. On the other hand, U.S. members of SOG often substituted privately obtained kabars, Gerber MK-2's, Randalls, etc., for the issue knife.

One of the more legendary units of the Viet Nam War was the MACV (Military Assistance Command Viet Nam) outfit tha t went by the innocent sounding title of "Studies and Observation Group" or SOG for short.

Normally operational SOG units consisted of a small group of U.S. Special Forces and a hand picked team of Asians. Depending on the mission, SEAL's, Marine Force Recon, Army Rangers, Air Force Air Commandoes and other special units served with SOG, as needed.

Issue field SOG knives, depending on lot, were either totally unmarked or marked simply with a serial number. Later in the war, many of these knives were dressed up with the Special Forces' crest and various inscriptions to serve as presentation pieces at a variety of award ceremonies.

For ihstance the honor grad of my class at the Special Forces Recon Commando school in Na Trang received an SOG inscribed with his name and serial number. Recently, a new knife company, SOG Specialties, introduced a close copy of this presentation model knife.

SOG Specialties' first step was to search out one of the original manufacturers of the knife in Seki, Japan. Next, they asked well-known knifemakers, A.G. Russell and Lloyd Hale to correct the deficiencies and generally modernize the design.

The result is a 614-inch blade .28-inch thick of plain high carbon steel, hardened to a Rockwell of 57-58. Both the blade and the metal parts of the handle are blued for rust inhibition and stealth.

Unlike the untreated leather handles of the originals, SOG Specialties resin impregnates the leather washer of their version to seal out moisture. Along with a serial number and "SOG Specialties" the blades are stamped with the Special Forces' crest and "Viet Nam, 5th Special Forces Group."

Scabbards are of the same high quality and design as the original, with a stone pouch on the front. Total weight for knife, scabbard and sharpening stone is a reasonable twenty ounces. Retail price for knives with serial numbers over 101 is $199, with those under 101, running higher, depending on how low they are.

While many of these SOG replicas will probably end up in collections it is also intended to be a first class field knife. As one of those Vets who wishes he had brought an original home, it didn't take me long, after seeing SOG Specialties' ad, to request a knife for field-testing.

The first thing I did when the knife came was to compare the replica to an original from a friend's collection. One of the first differences I noticed was that the new knife comes with a very thin, hollow-ground edge.

This is a big improvement over the thick, chisel grind found on the issue model on which the false edge was fully sharpened two and one-half inches back from the point. This same area on the replica has been ground almost to an edge then flattened off, possibly to prevent legal problems.

Though a sharp false edge isn't of much use on a sporting knife, if heading for a combat zone, I would spend a few minutes with a file and stone, putting a functional edge on this area.

I, personally, like the feel of a leather-handled knife, but leather has a reputation for not standing up under hot, humid environments or repeated soaking and drying.

While it's kind of hard to condense twelve months of jungle warfare into a field test, I did my best. After coating the blade with Rust Guardit, I left the knife out in the rain all night and then set it on a window sill to dry, during the day.

For some reason, our Northwest spring weather turned abnormally dry the third day of the test, so I was forced to soak the knife in a tank of water one hour a day for the next eleven days.

Twice I forgot to pull the knife out and it soaked for eight hours, instead of one. The last two days of the test the rain came back and I, again, left the knife outside each night.

Except for a hairline gap between two of the center washers, the SOG Specialties' resin-impregnated handle was still tight as new. Having worked around the original knives a while, I know what a disaster this test would have been for the issue model.

The SOG Specialties' represent ative suggested I try the free hanging one-inch Manila rope trick of which the handforged knife people are so fond.

For those not familiar with this test, the object is to chop the bottom six inches off the rope in one pass. If you have ever tired to cut Manila rope you know how hard it can be to saw through the stuff, under tension.

To cut a free-hanging rope, a knife needs to be both extremely sharp and have a thin edge profile. Naturally, longer blades are an advantage and the handforged people seem to prefer knives in the nine- to ten-inch range for their demonstrations.

I made ten passes at the rope with this SOG replica and managed to part the rope twice. On the other eight attempts the rope was about three fourths separated, not really that bad for a thick 6 ¼-inch blade.

The next test of the SOG replica was clearing some of the rain forest vegetation that is constantly trying to reclaim our homestead. Mostly, this meant cutting off a variety of small trees, bushes and vines in the one-half to one-inch range.

The knife proved to be comfortable and easy to handle in use and the hollow grind blade bites into wood much better than the original would have.

While this knife is a long way from being a machete, it was no problem to chop through large individual Salmonberry and Blackberry vines.

One of the standard tests of combat/survival knives (that are too small or light to chop firewood) is to split kindling by pounding the knife through a chunk of wood with a club.

After starting with relatively soft Red Cedar, I worked my way through sections of Alder and Maple hardwood logs.

This is a fairly severe test of a knife and it's not unknown for blades to snap or for the guard and handle to loosen up under the pounding.

None of this occurred with the SOG Specialties' knife and other than a little wear on the blade bluing, there was no damage to the knife.

Having quite thoroughly dulled the blade clearing brush, I set out to resharpen the knife on a Norton combination, India oil stone.

This proved to be a quick, easy task and after a couple of minutes I had restored the edge to its original sharp condition.

As a perfectionist when it comes to knife edges, I gave the blade a few light passes over a hard Arkansas as a finishing touch.

The knife would easily shave hair off my arm, bite into Manila rope or slice paper, depending on how you prefer testing edge keenness.

After two or three months of constant use, most of the bluing on the metal parts of the knife had worn off. Here is one area where plain high carbon steel has an advantage over stainless.

A little gun touch up bluing will have the blade looking like new. Of course the blade will rust if not kept coated with oil, something that's not always easy to do in the field.

I was told by the SOG Specialties' representative that a stainless version of the knife is in the works, which might be a better choice for those planning to carry the SOG under hot, humid conditions.

There will, also, soon be a smaller folding version of the SOG blade available in both stainless and high carbon. I hope to test this interesting-looking, heavy-duty folder sometime in the near future.

Ex-Special Forces types, wanting a good facsimile of the issue SOG bowie they carried in Viet Nam, should find the SOG Specialties' copy to be just what they are searching for.

For those on active duty this SOG replica would make a highly practical, combat/ utility knife and it doesn't require the long wait many customs do.

The SOG bowie replica could, also, serve as a useful tool for the outdoorsman in need of a heavy-duty, general purpose trail and survival knife.

SOG Specialties tell me they will have a number of other interesting products coming out in the near future. If this knife is representative, I'll look forward to seeing what else they have up their sleeve. 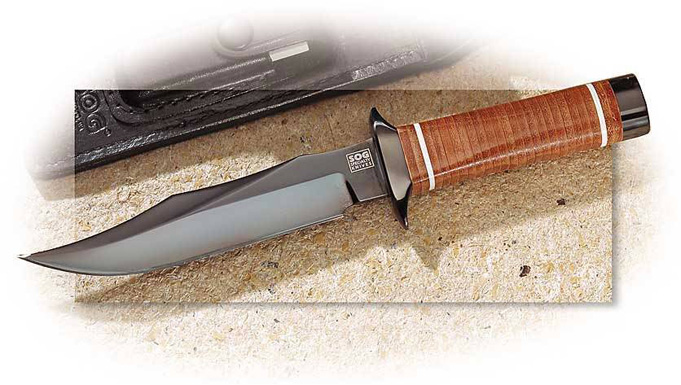